With Fort Point Exhibit, a Look at the Global Migrant Situation

A floating sculpture composed of 22 orange figures clinging onto black inner tubes is the 12th art installation of the Floating Public Art project organized by the Fort Point Arts Community.  The artwork, named SOS (Safety Orange Swimmers), was installed in early October and will be on display for six weeks at the Fort Point Channel.

Designed by Ann Hirsch and Jeremy Angier of A+J Art + Design, the Safety Orange Swimmers are an artistic portrayal of the current global migrant crisis. Hirsch spoke about the thought process behind the sculpture and gave insight into why it’s such a personal piece of work for her.

“I am a granddaughter of immigrants,” she said. “I live in a city comprised of an incredible refugee population who have come with absolutely nothing, and have made lives here.”

The Fort Point Channel was an ideal domain that provided Hirsch and Angier the opportunity to create something that spoke to the current refugee crisis in which 21.3 million people are affected. The floating, bright orange figures symbolize an event many refugees experience as they flee their countries by boat to seek asylum.

Onlookers at Fort Point stop to admire and make sense of the eye-catching figures. The uniform shapes are painted “safety orange” for good reason. From an artistic standpoint, it was important for the artists to choose a bright color they knew would make a big impression on observers.

On a deeper level, the color “safety orange” is a color that signifies the idea of hazards, danger and safety. Life vests and safety rafts are usually this brash, orange color which set them apart from their surroundings. The alarming orange color evokes a sense of urgency common to the journey of those seeking asylum.

The installation comes at a time of political uncertainty in relation to immigration. With the election less than a week away, the issue of immigration in the United States has been hotly contested, with both candidates engaging in a back and forth of vitriolic advertisements. Recently, the sculpture has gained traction on social media, with Bostonians sharing images of the orange swimmers on Facebook, Twitter, and Instagram. Each post is accompanied by poignant captions with many interpretations of the artworks message, with one person writing, “Each figure represents a million refugees.”

While the artists had a clear meaning for the figures while they created it, Hirsch understands that the message can be ambiguous for some.

“It doesn’t necessarily scream ‘immigrants’ at first glance, and not everyone sees the refugee crisis narrative portrayed by the figures,” she said.

Those who view the work in person will notice how different the swimmers look in contrast to photos of the work. The success of the artwork relies on movement and is intended to be experienced as kinetic artwork. Hirsch notes that those only viewing the work on social media may have ambivalent opinions about the sculpture that is meant to be viewed three-dimensionally.

“It’s critical for people to see how the figures respond to wind, water, and light,” she said.

The figures are in constant motion in accordance with the movement of the tide. The anchoring system allows the entire group to rotate—as the tide comes in, it turns in one direction, and when the tide goes out, the whole group spins in the opposite direction.

The entire process was composed of three distinct phases: the design phase, the fabrication phase, and the installation phase. It only took six weeks to complete the fabrication phase, during which the figures were made from marine-grade polyurethane foam and painted with lobster buoy paint. The pieces were then tied and then configured by a tethering system. Each figure was tied to a web comprised of PVC conduit, which keeps it from traveling too far out of its position, but also allows it decent mobility.

All 22 figures display expressionless faces that were computer-generated in order to have a conglomeration of many different faces of no particular race, age, or gender. The figures are clinging onto black inner tubes, an image reminiscent of migrants struggling to make their way to shore from the sea, as many immigrants make long and treacherous journeys on dilapidated boats and rafts that often capsize. After a positive reaction was received, the artists are now interested in traveling with the Safety Orange Swimmers with the hope of generating a physical impact that goes beyond current geography.

“The narrative is that they are trapped in the middle of this art basin and they continually move and turn, but they don’t actually ever arrive,” said Hirsch. 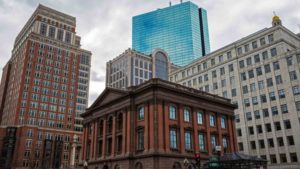 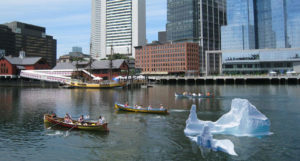