Home » In Panel, BC Alumni Explore Non-Business Applications of Marketing 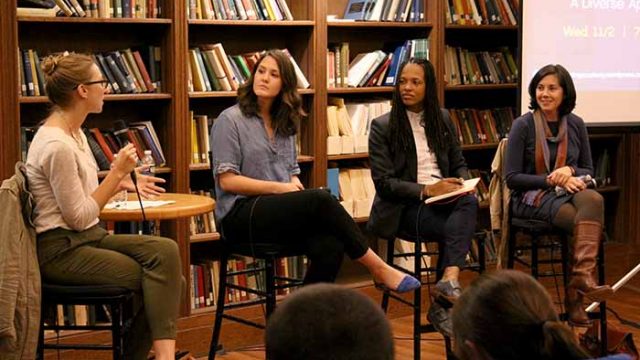 In Panel, BC Alumni Explore Non-Business Applications of Marketing

The Marketing Academy of Boston College, led by Jackson Rettig, CSOM ’17, hosted “Doing Well By Doing Good: A Diverse Approach to Social Impact” on Wednesday night. The event was the result of planning started last summer and organized through connections with alumni.

“Everyone has a connection with BC in some way,” Rettig said.

Held in the Fulton Honors Library, the event was an hour-long panel on various applications of marketing techniques for non-marketing majors to see how marketing principles could be used in non-business contexts. The panel featured four BC alumni who had gone into various fields after school, from running non-profit enterprises to involvement with corporations that spanned three continents.

Rettig hoped that students of various majors and interests would take something away from the event.

“We thought that that diversity in terms of the businesses and organizations [the speakers] work with … is important for the students,” he said.

Throughout the hour, the panelists discussed how marketing could be used for addressing social issues and challenges in areas outside of business. One panelist shared stories of working at and expanding a soup kitchen, as well as creating a newspaper run and sold by homeless individuals.

“Marketing is about more than just business, … marketing is everything.”

Another speaker explained the importance of having a personal brand to present in and out of the workplace, citing individuals like Kanye West and President Barack Obama as examples. Mark Zuckerberg and Elon Musk were used as examples to students that one does not have to choose between doing good works and making money.

Thaly Germain, executive director at Lynch Leadership Academy, told students they could and should try to do both.

“You don’t need to be starving to do good,” Germain said.

The panelists taught about advertising and increasing awareness of one’s work, using examples such as the advertisements on subways. They described struggles they faced and how marketing knowledge helped them regardless of their career paths, such as one who after school made an attempt at a rapping career. Another formed a business partnership with Google through persistently contacting Google offices.

Freshmen were urged not to wait until they were seniors to make a decision on what they wanted to do with their lives after school, as they could be putting their energies toward making the world a better place.

An open question period was held toward the end of the panel, during which the speakers addressed matters such as race, holding conversations about social issues with friends, and how to be patient and work out problems with loved ones they disagreed with rather than giving up.

Social impact is a subject of interest at BC, Rettig noted, and marketing techniques continue to be relevant to matters of social justice.

“Marketing is about more than just business, … marketing is everything,” Rettig said.

Rettig continues to plan to increase interest in marketing among BC’s student body, and to host events that can appeal to more students than just marketing majors.

“I thought everyone can take something away [from the event], which is what our goal is,” he said.