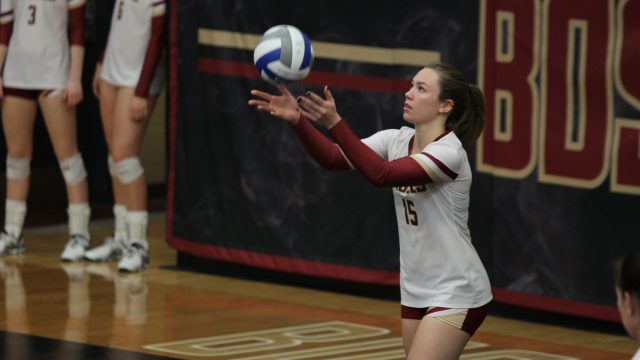 After its first conference win against Wake Forest on Sunday, Boston College volleyball was hungry for another Atlantic Coast win—and it wasn’t disappointed. After losing to Syracuse earlier in the season, BC shut out the Orange three sets to one in its second ACC win of the season.

The first set was close, with neither team getting more than a four-point lead on the other. Syracuse (6-17, 5-8 Atlantic Coast) won four points in a row, giving the team a 8-4 lead on the Eagles, but BC (7-16, 2-11) didn’t let that get the Orange down after four kills in a row. After two consecutive aces by Natalie Canulli, the Eagles were back in the lead 9-8. The back and forth continued, but after two more aces and multiple kills, the Eagles ran away with the set, 26-24.

The momentum continued into the second set, with two kills in a row by Jill Strockis and an ace from Madisen Lydon put BC ahead of Syracuse. The Orange tried to keep up, but a service error after Christina Oyawale was hit in the head and multiple out of bounds hits made it hard for Syracuse to catch BC. After an 11-game losing streak, the Eagles have finally started getting their technique down and show they can play with the big dogs. Three more aces by Canulli, Strockis, and Julia Topor made sure to put BC over the edge, and the Eagles won the second set, 25-23.

After halftime Syracuse wanted to make sure it wasn’t a complete shutout game, and came in strong. Multiple kills and sloppy blocks forced BC to take both timeouts, while the Orange looked calm and collected as the set continued. An ace by Jane DeJarld and four late kills wouldn’t prove enough, as the Eagles lost the third set 19-25.

After Syracuse took the first point of the fourth set, BC would not let a repeat of the third set happen. Five consecutive kills by BC forced a Syracuse timeout, the one minute, 15 second rest only helped the Eagles, as they took four more points following the break. It looked like Syracuse had a chance after a BC net violation would lead to seven consecutive Orange points and two BC timeouts, but it wasn’t enough to get a lead on the Eagles. Three more points by BC forced the second and final Syracuse timeout of the game, but after a service violation that resulted in the ball going out of bounds, the Eagles came away with another ACC win.

“Syracuse always blocks well,” head coach Chris Campbell said after the team racked an impressive nine aces in the match. “They’re big, they’re athletic … the difference for us to counter that was we knew we had to serve tough to try to limit the damage their middles could do to us. The team did an excellent job of executing that game plan. I was really happy.”