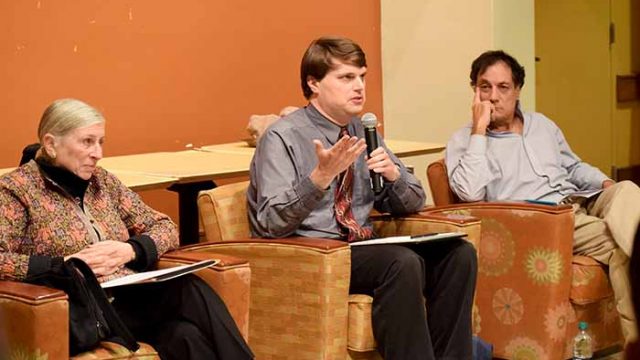 In light of Donald Trump’s ascension to the presidency, the Campus Activities Board (CAB) hosted an event entitled “The New President’s To-Do List,” featuring three professors who engaged in a discussion about the current political and social climate in the United States. They also added their own insights and opinions and discussed what Trump’s next steps must be.

Scholzman began the panel discussion by talking about how unprecedented the election was—the Democratic nominee was the first-ever woman nominee and the Republican nominee was a real estate developer and TV personality who had no prior experience in politics.

Schlozman reminded the audience that Trump won the electoral vote, but Clinton clinched the popular vote.

“Don’t make the classic [post-election] mistake of thinking everything Clinton did was wrong and everything Trump did was right,” Schlozman said.

Schlozman said the most seismic changes are going to come because the Republicans now control the executive and legislative branches, giving the GOP appointments discretion over the judicial branch. The question, according to Schlozman, is now how that power will be converted into policy change. There’s no question that there has been a divide in the country between those who want more reform to many socio-economic issues and those who do not, she said.

Schlozman also commented on how the odds may have actually even been stacked against Clinton in the election.

“Clinton had a structural disadvantage being part of the party that was in power for the last eight years,” Schlozman said. “Once a party has had control for eight years, it’s difficult for that president’s successor in the same party to win.”

What often happens, according to Schlozman, is the party that was not in power—in this case the Republicans—has a strong desire to regain political power. This may have contributed to a seemingly strong demand by some members of the Republican Party to get its candidate in office, focusing more on their party’s representation rather than the policies of the elected.

Schlozman then closed her section by posing two hypothetical questions that seem to be on the minds of many individuals regarding the rhetoric used during the election season.

“The president’s rhetoric affects people’s lives. We’ll see how this rhetoric changes. I hope that it does. I doubt that it will.”

“What are our standards for campaign rhetoric? Is this a new normal trend for the future or a temporary departure?” Schlozman said.

Following Schlozman, Hopkins talked mainly about the Republican Party, stating that this is the first time since 2006 that the U.S. has had unified Republican control.

Hopkins also noted the current strength of the Republican Party with control of all three branches.

Trump has been challenging the U.S.’s role with respect to allies and institutions, and inviting foreign involvement into American domestic politics, Hopkins said.

Melnick, the final speaker of the night, agreed with Schlozman that this has been a highly unusual election. He noted that he does not usually take a partisan position as a professor, but this year he couldn’t help it. In spite of this, Melnick gave a couple pieces of advice for those who are upset about the Trump win.

Melnick advised the audience to not panic or engage in violent behavior. He then emphasized the importance of not questioning the legitimacy of the outcome.

The final piece of advice Melnick gave came from John Newton Mitchell, the attorney general of the United States from 1969 to 1971, under President Richard Nixon.

Melnick clarified that he is interested in how Trump will govern rather than what he will tweet, a reference to the president-elect’s past use of vulgar language and inaccurate information on Twitter.

The discussion closed with a question-and-answer period. One audience member asked whether Clinton’s loss has any implications for the future of women in politics and society.

Schlozman said that she has never seen a campaign where such overt misogyny was accepted. She is unsure of how much of a permanent departure this will mean for women’s involvement in politics.

Melnick also shared his opinion on the matter.

“The president’s rhetoric affects people’s lives,” Melnick said. “We’ll see how this rhetoric changes. I hope that it does. I doubt that it will.”