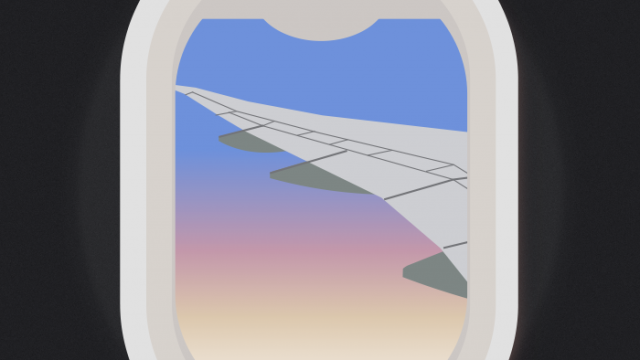 Now Boarding For a New Adventure

I hate flying. I hate it more than anything else in the world.

It’s weird because I like airports. I love being surrounded by a medley of food and people bustling off across the world. As a kid, I would look at all of them and wonder where they would go. I’d grab my mother’s hand and point out to the planes on the tarmac, telling her which airline or plane it was. A lot of airlines name their planes, too, so I’d try to get a running list of the entire fleet that I saw.

(Spoiler alert: I only ever saw the same two planes because every time I flew, we’d just be going back and forth between JFK and Orlando, pretty exclusively on JetBlue.)

Yet when I sat down on the plane, I freaked out. I couldn’t handle being in one place for more than 15 minutes at a time, much less two hours in a pressurized cabin full of people who most definitely didn’t want to hear me speak. I vowed to swear off travel completely. If people wanted me to see the joys of what the world can offer, I told them that the world could come to me.

Obviously, it wasn’t all up to me. But for 18 years, I lived contentedly, shuttling back and forth between the Northeast Corridor and the tail off the South they call Florida. I had a short diversion to Chicago, but for the most part, I stayed safely out of the skies.

I seemed to forget this when I ran as sports editor of The Heights back in 2014. Connor Mellas, then the man in charge, pitched me on the idea of getting to cover the most prominent games. For eight years, I did musical theatre in school—getting to be on center stage is where I thrive. Caught up in the thrill of becoming a real-life journalist—well, without the pay—I didn’t realize that the most prominent games meant flying across the country to the farthest recesses of the ACC.

Ask the guys over at WZBC how I felt when I boarded the plane to Duke last fall. I firmly shut my eyes in the middle seat of the last row. I made fists with my toes during takeoff and landing, just like that passenger told John McClane to do at the beginning of Die Hard. Yes, there may have been a little yelp or two. I was already terrified enough of writing the story well and quickly enough to get it out to the masses. Now I had to deal with my life flashing before my eyes as the landing gear went up.

Well, I made it to and from Durham in one piece, even as Boston College football fell apart around me. The story went out fine, too. I’m sure at the time I said that the story was the best I’d ever written, but honestly, I say that to myself every time I write something. As time sped by on the job, my stories got better and, more importantly, got to the public more quickly. And after trips to South Bend, Ind.; Clemson, S.C.; Tampa, Miami, Tallahassee, Winston-Salem, N.C.; and even Dublin, my anxiety decreased as I flew more in one calendar year than I had in my entire life.

Because of The Heights and BC Athletics, I am no longer afraid to fly. So now, I’m taking off again.

Starting Jan. 1 (but really, starting on Monday), I will be moving on from my position as your sports editor. This is my final column in that position.

It has been an honor to serve as the student voice of BC Athletics elation and frustration for the last two years. As of publication, this job has put me in the press box for 80 games across seven different sports: men’s hockey, football, baseball, women’s hockey, men’s basketball, lacrosse, and women’s basketball. Including this column, you’ve read something I’ve written a whopping 209 times. I truly thank everyone for sticking with me throughout what hasn’t been an easy two years.

Only in football have we taken our lumps together. The Eagles have gone 8-13 over these last two seasons, plus the Pinstripe Bowl, where we truly acquainted ourselves for the first time over the Twitter-sphere. Over that time, we’ve seen a lot of turnovers, not a lot of points, and the most frustration. And I even made a best friend—he just doesn’t know it yet.

I wouldn’t leave without putting the BC sports community in such capable hands. Riley Overend and Annabel Steele will still be sports editors, with Riley taking over the top spot. Most importantly, both are unafraid of getting their hands dirty in press conferences afterward. They will continue our great tradition of holding BC coaches and administrators accountable for their performances and what they say, as Tom DeVoto, Jack Stedman, and I did before them. Neither will stray from controversy. Both will continue to tell amazing stories.

Before I sign off, just a few more people I need to give shoutouts too for making this job so fun for me:

Thank you to Mellas and Austin Tedesco. You could’ve fired me when I screwed up that Clemson men’s soccer article back when I was a freshman. (Don’t look it up in the archives—it died in a fiery hell when [email protected] and the accompanying Google Drive were wiped off the face of this earth). You both set the foundation for the writer I am today. I literally would not have been here without you.

Thank you to Connor Murphy, Shannon Kelly, Kaylie Daniels, Magdalen Sullivan, Alec Greaney, and Archer Parquette. Our words wouldn’t have ever gotten onto the pages without you. They quite literally would never have made it that far. For Alec, a special thank you for making our online templates look as wonderful as they did. For Shannon, when it comes to The Heights at least, thank you for taking the women’s hockey beat with a unique enthusiasm and love for the game and players.

Thank you to Julia Hopkins, Amelie Trieu, Savanna Kiefer, Drew Hoo, Daniella Fasciano, and yes, even Arthur Bailin. Your photos captured the moments of BC Athletics when my words couldn’t do it. For Julia, thank you for accompanying me on our many road trips. I am excited for the places we have yet to see together.

Thank you to Keaton McAuliffe. To those who don’t already know, she was the mastermind behind the majority of our print designs over the last two years. You picked up our pages because she made you want to. It’s not easy designing loss after loss, but each one was especially enticing in its own way.

Thank you to Carolyn Freeman and John Wiley. I certainly didn’t make life easy for you two by wanting to push out content. You both made a special effort to learn sports to help make our writing better.

Thank you to Zanna Ollove, Mark Majewski, Matt Lynch, Lizz Summers, Jason Baum, and, especially, Chris Cameron. Media relations is a thankless job. You were all patient with me as I learned the job. Thank you for giving me someone to laugh with in the press box, on road trips, or at practice.

Thank you to Ken Powtak of the Associated Press, Julian Benbow and Mike Vega of The Boston Globe, Richie Thompson of The Boston Herald, Eric Avidon of The MetroWest Daily News, Bill Maloney of Eagle in Atlanta, and, of course, the entirety of the BC Interruption crew—Brian Favat, A.J. Black, Joe Gravellese, Eric Hoffses, Grant Salzano, and Laura Berestecki. You welcomed me into the BC sports media family with open arms. You made it fun to have people with whom to celebrate (quietly) or complain (loudly) about what was going on on the field. We are the people who speak for the ever-frustrated fanbase in Chestnut Hill. Don’t let ’em down. Speaking of which…

Thank you to all of the Twitter users out there who make covering games more fun with your various commentary. BC fans are some of the greatest in the world, though they’re not given any credit for it. They haven’t had a lot of success to celebrate, yet they get more deeply frustrated than any fanbase I know—and I root for the Mets. You can’t hate on a group of people who care this much about merely wanting their team to win. Who doesn’t?

Most of all, Steve Addazio. Man, where would I be without you? A sincere thank you for my going away present. Saturday was the first time I got to see an ACC win in person in either men’s basketball or football since I became a BC student. It took two and a half years longer than I thought it would, but at last, it happened. Congratulations. We’ll meet up again in Shreveport, Detroit, St. Petersburg, or wherever the Eagles end up for their bowl game.

Oh, wait, don’t worry. I’m not leaving the BC Athletics scene. Far from it. I’ve got a year and a half left at this school, and a lifetime of tweeting after that. I’ll still be on the men’s hockey beat—I’d miss Jerry too much. I’ll still be writing features on the athletes, or in the Shea Field press box as long as that old trailer is still standing.

And yes, Steve, I’ll be in the Yawkey Athletics Center every Saturday for as long as you’re there.

But for now, I have to go. My flight’s about to leave. I’ll see you all when I get there.