Heather Cox Richardson, a professor of history at Boston College, was included on a “professor watchlist” published on Nov. 21 by Turning Point USA, a conservative activist group that aims to educate students about free markets and limited government. Richardson’s name no longer appears on the list. It is unclear when it was removed.

While Turning Point acknowledges a respect for free speech, the list’s organizers wrote that it was being compiled in the interests of students, parents, and alumni knowing about “the specific incidents and names of professors that advance a radical agenda in lecture halls.”

Richardson is a prominent writer about American history and the conservative movement, and her most recent book is To Make Men Free: A History of the Republican Party in 2014. She said in a phone interview Sunday that she found out she was included on the list after people posted about it on her personal and professional Facebook pages.

“My first reaction was just to have my gut sink,” she said.

Richardson has been included on a list like this before, and she said the worst thing was having her friends and family hear about her being on it and immediately get in contact out of concern for her safety. Richardson said she is surprised by the amount of attention the list has gotten, since she views it as somewhat amateur. She wrote a Facebook post about being on the list, and when she got home from grocery shopping after posting it, saw that it had been shared several hundred times. Provost and Dean of Faculties David Quigley, University Spokesman Jack Dunn, Dean of MCAS Greg Kalscheur, S.J., and Kevin Kenny, chair of the history department, all reached out expressing their support.

The list Richardson was previously included on was compiled by a group associated with the alt-right movement, a radical offshoot of conservatism that has received increased attention during the presidential campaign and since the election of Donald Trump. The alt-right has been at the center of a controversy within Trump’s transition team. Stephen Bannon, who is currently slated to be Trump’s chief strategist, was formerly the chairman of the anti-establishment conservative outlet Breitbart News, which became more vocally supportive of Trump as the campaign wore on.

Breitbart published a short piece on Tuesday headlined “Boston College Faculty Want to Ban Trump-Inspired ‘Hate Speech’” that linked to a letter signed last week by around 50 faculty members. The article had no overt criticisms and mostly quoted from the letter.

Richardson guessed that whoever made this professor watchlist used names that have previously appeared on similar lists, which could explain how she ended up on it.

“Since she joined the university, I’ve come to know better just how committed she is to the work of teaching and mentoring,” Quigley said in an email. “The watchlist is troubling to me, not least because somehow an exemplary teacher-scholar ended up on it. While we are glad that Professor Richardson’s name has subsequently been removed from this list, it is important to affirm that our faculty enjoy our full support, and we will never be intimidated by any political activist or website.”

In addition to research and historical writing, Richardson said she has also done some political writing. She described the modern Republican Party as having been taken over by a cabal of movement conservatives who aren’t actually Republicans. She sees Trump as a little bit different from that.

“Donald Trump is not technically a Republican or a Democrat, I would call him more of a salesman,” she said.

These movement conservatives were just a radical group of Republicans in the 1950s, but as they have gradually gained power, Richardson said, they have moved to dismantle the government’s regulatory framework and social welfare legislation. Richardson said the way these radicals gained power was by arguing that any regulation was a redistribution of wealth from hard-working white people. That rhetoric always had what Richardson calls a “wink and a nod”—Republicans really wanted to reduce taxes and business regulations, and they used the concept of a “welfare queen” to sell it.

“But the problem is that that language took on a life of its own over the past generation,” Richardson said. With the alt-right came clear strains of racism and sexism, she said, divorced from the economic motives of the old movement conservatives.

“The alt-right now I think is kind of a Frankenstein monster come to life,” she said.

Another thing fueling the creation of this kind of watchlist is anti-intellectualism, which Richardson said has existed in some way in the United States since at least the 1600s. But these same movement conservatives took it in a much more extreme direction. Richardson said that when presented with facts, most Americans would actually support government regulation and a basic social safety net, so instead these conservatives focused on nurturing an us vs. them, hard-working Americans vs. people of color narrative.

“In order to promote that, they really had to undercut the idea that facts really mattered,” she said.

Richardson highlighted in particularly William F. Buckley’s 1951 book God and Man at Yale, which accused Yale faculty of being socialists, and over the next three years, she said, he evolved into calling anyone who agreed with government regulation of the economy a capital-L “Liberal.” That contributed to an anti-fact mindset among Buckley’s audience, and the phenomenon continues to play out today, Richardson said, as Trump and his surrogates question the legitimacy of the media in what some have dubbed a “post-fact world.”

“That is a new moment,” she said. “In the past, American politicians have at least pretended to care about the reality of the world around them.” 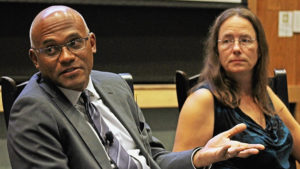