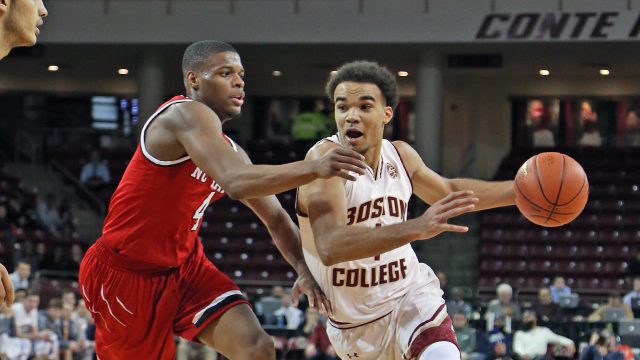 The 6-foot-7 forward burned the Eagles in their second-to-last ACC game of the 2015-16 season. Caleb Martin found Rowan on a cut in the paint with 1.1 seconds left for an unguarded layup. A surefire 72-71 victory for BC, one that would end its brutal ACC losing streak, once and for all, was gone. In its place, an embarrassing 73-72 loss.

This season, with about 10 minutes to go at Conte Forum, Rowan hit a turnaround 3-pointer on a broken coverage by Jerome Robinson. A four-point lead evaporated to one, and the Eagles lost their momentum. Robinson immediately recognized he had screwed up that play. Determined not to let last year’s disappointment happen again, he clapped his hands and screamed in frustration.

But this year, Robinson has help in freshman guard Ky Bowman. And when the two of them are clicking like they were on Wednesday night vs. the Wolfpack, the Eagles are nearly unstoppable. The duo from North Carolina combined for 43 points against one of their hometown teams, helping BC to a 74-66 victory. Though it’s still early in the season, BC is now 2-0 in the ACC at home. It’s something that head coach Jim Christian has emphasized as the absolute key to winning in the nation’s toughest conference.

“Sometimes you got to grind one out, and you got to win at home,” Christian said. We’re 2-0 at home. … We got to keep with those teams if we want to have a chance to compete.”

To open the game, the Eagles (9-8, 2-2 Atlantic Coast) got off to the right start. Bowman, whose Flamin’ Hot Cheetos hair has since dimmed down to the color of Taco Bell’s ground beef, knocked down back-to-back 3-pointers in the face of Rowan. A quick 8-2 lead for the Eagles forced NC State (12-5, 1-3) head coach Mark Gottfried to call timeout less than two minutes into the contest.

The timeout screwed with the Eagles’ mojo, letting the Wolfpack claw its way back. Dennis Smith, Jr., the man that drew 20 scouts to the audience—including Boston Celtics general manager Danny Ainge—led the charge with a couple of 3s and quick drives to the basket. Combined with the strong play of Terry Henderson and the imposing presence of 6-foot-9, 320-pound BeeJay Anya, the Wolfpack opened up a five-point lead halfway through the frame.

Yet that was the farthest NC State could ever get ahead in the game. With two minutes to go in the half, Bowman raced down the court and nailed a 3-pointer from the far corner to tie the game. A minute and a half later, Connar Tava knocked down a 3-pointer to lock down a 34-32 BC lead into halftime.

Tava, who would finish with 13 points on 5-of-8 shooting and six rebounds, spent much of the game doing something he hasn’t done a lot of this season: looking toward the basket. It’s a change that Christian is encouraged by—he believes that opposing offenses ignore him as a scoring threat, a dangerous mistake.

“He’s such a good facilitator of offense, but he has to look for it, especially the way teams sag off him,” Christian said. “I want him to shoot more.”

As he rarely ever is, Christian wasn’t satisfied with the first-half offense, particularly that of A.J. Turner, who was 0-for-6. Yet, unlike last year’s team, Christian has lauded his Eagles’ ability to regroup and make necessary adjustments at halftime. Sure enough, that showed immediately. Turner knocked down a 3-pointer to open the second-half scoring.

In the first 10 minutes of the second half, NC State controlled the pace. Smith and Henderson dazzled with 3-pointers and speedy drives. Anya was practically unguardable when going up against Nik Popovic and Mo Jeffers in the paint, especially when the big man flew in the air for dunks.

But Turner stole the momentum for good with, well, a huge steal. He poked away the telegraphed pass by Markell Johnson. By the time Henderson caught up, he had no choice but to foul Turner for an and-one conversion. Turner shimmied toward the BC bench with his tongue out in celebration.

Then the Tar Heel tandem took over doing what they do best: knocking down treys and attacking the basket with reckless abandon. Robinson answered Turner’s and-one with a 3-pointer off a turnover. Turner followed with another drive-and-steal, and Robinson added in a few more free throws and jumpers.

But the most emphatic play of the game came from Bowman. He perfectly read a pass by Rowan to Smith for a steal. He blew by the projected lottery pick easily and slammed down a dunk that made the 3,904 (reportedly) in attendance at Conte Forum rise to their feet. In one slam, the scouts’ eyes shifted their attention from the highly-touted 5-star recruit from Fayetteville to the 2-star football player turned basketball powerhouse from Havelock.

Rather than feeling the pressure from playing another Tobacco Road team that forgot about them in the recruiting process, Robinson said it makes he and Bowman far more relaxed. That’s especially true because they’re playing a lot of the guys they grew up with.

“It just felt like another Raleigh pickup game out there,” Robinson said.

But what it didn’t feel like was last year. The Eagles easily pulled away at the end against a team they couldn’t dispatch. Christian said one of the changes is just letting everything in the past go.

“I don’t care about any of the other stuff that happened prior to this year,” Christian said. “I really don’t. It’s way over. We’ve moved so far past it. … I don’t even think about it.”

It’s a lot easier not to think about it, though, when Bowman and Robinson are raining down points on ACC teams night after night. When you’ve got a backcourt like BC does—arguably the most dynamic in the conference—it’s really hard to imagine losses at all.