The fans, students and general attendance alike, came out in full force to see Boston College men’s hockey against Boston University two weeks ago in the friendly confines of Chestnut Hill. One day back from Winter Break, Eagles of all ages were thrilled to kick off a new semester against their archrivals. But the game didn’t turn out the way BC planned. Manhandled by the Terriers’ huge defensive corps, the Eagles fell to the soon-to-be No. 1 Terriers, 3-0, on a night that lacked reason to cheer.

And Chris Calnan had enough.

“We get shut out against BU, and all the guys are freaked out and bummed out that we did that in front of all the students,” Calnan said.

So he did what every good captain should do. He changed the narrative. And what better team to do it against than the University of Notre Dame.

In the final-ever Hockey East meeting between the two Holy War rivals, the Eagles came out on top in arguably their most important win of the season. Thanks to some heroics from Calnan and their most electrifying offensive attack of the season, No. 13 BC came back from deficits of 1-0, 2-1, and 4-2—all while surviving a wild last three minutes on the penalty kill—to topple the No. 15 Fighting Irish, 6-4.

In his opening statement, BC (17-9-2, 12-3-1 Hockey East) head coach Jerry York immediately credited the best group of 7,884 Kelley Rink has seen this season for its role in the victory.

“I think our crowd played a huge factor in our win tonight, and how hard we play,” York said. “Hats off to the students, the season ticket holders, the people who came to watch a good hockey game. Because this rivalry, Notre Dame-BC, is special.”

And special it was, right from the get-go. The Fighting Irish (14-9-3, 7-5-2) got off to a blazing start just 1:04 into the game. Noted Eagle killer Anders Bjork backhanded a dumpy knuckler over the head of goaltender Joseph Woll off a rebound forced by Tory Dello. BC’s third line of Calnan, Julius Mattila, and David Cotton—a unit that combined for three goals and four assists—responded a three minutes later. Cotton took advantage of a turnover along the far boards and beat out Cal Burke in front of goaltender Cal Petersen, one of the country’s best. Calnan got just enough space on Petersen’s left to eat up Cotton’s late pass to tie the game at one.

As was the theme early in the game, the Irish just found a way to respond, in spite of BC’s best efforts. Freshman Luke McInnis, who has struggled at times against the conference’s best forwards, put picturesque coverage on Notre Dame’s Andrew Oglevie. But the stellar sophomore still found a way to spin around and chuck a backhanded lob up that skirted through Woll’s five-hole. Though the Eagles kept the pressure on to close the frame, they ended the first period down 2-1.

Four minutes into the second period, Christopher Brown got an equalizer. Set up perfectly by Casey Fitzgerald, Brown got in front of Oglevie to beat Petersen low.

Yet, in the middle frame, the Irish had more fight. The Eagles’ defense did a poor job getting back after Woll let up a juicy rebound of which Felix Homberg took advantage. Two minutes later, Oglevie took charge during a Dello penalty, combining with Bjork for a shorthanded goal. Halfway through the game, the Eagles faced a two-goal hole with a slumping offense that needed to make up for it.

The thought of giving Notre Dame—a team which will depart Hockey East for the Big Ten after this season—the sweetest of goodbye gifts was too much for the Eagles to pass up. Mid-hit by Dello, Matthew Gaudreau chucked a puck backhanded as he fell to the ice with five to go in the second. Miraculously, he found Colin White streaking in between the circles. The Ottawa Senators prospect slotted it past Petersen to cut Notre Dame’s lead to 4-3.

Then BC put together its most complete frame of the season to close out the game.

Mattila got it started with a goal two minutes into the third. Clapping down hard on the ice at the top of the circles, Mattila was left all alone by the Irish defensemen. Cotton, fighting off two Notre Dame players in the corner, waited until just the right moment. At last, he unleashed the puck, and the Finland native wound and fired a slapper past Petersen for the equalizer. After ending the second with the momentum, Mattila’s goal gave the Eagles exactly what they needed to open the third.

“Just to get off the mat and keep playing, to be determined,” York said of his team’s comeback ability. “We still had to answer that bell.”

A questionable call followed with around 10 minutes to go in the third. Bjork and Oglevie broke away during a BC power play, with only Casey Fitzgerald left to defend them. Fitzgerald hooked Bjork, but the zebras determined that Bjork also held Fitzgerald’s stick in the process. The matching penalties led to the refs waving off a would-be goal that Bjork got out to Oglevie. And Notre Dame head coach Jeff Jackson was still upset about it in the media suite.

“I thought the call on Anders Bjork was the turning point of the game,” Jackson said. “Enough said.”

Jackson may be right on that point, because the Eagles had the game in hand from that point on. Beginning with Calnan’s astonishing goal on a feed from Cotton, the entirety of Chestnut Hill rose to its collective feet to will the Eagles to victory.

They’d certainly need every bit of it, as Gaudreau took a penalty at 16:44 to give Notre Dame a man advantage. BC had initially done a strong job keeping the Irish at bay. Yet White headed to the box for elbowing at 18:26. That call caused Jackson to pull Petersen, giving the Irish a brief 6-on-3 before a two-man advantage the rest of the way.

York called for Cangelosi, the nation’s best faceoff man, to win one in dire straits. And the Eagles kept it calmly away from the Irish.

“Our PK was fabulous down the stretch,” York said. “With a game still in doubt, we called upon five or six forwards and all the defensemen. And Joe Woll made some huge saves.”

It helped that, by the time that first penalty was killed, Fitzgerald found his brother, Ryan, streaking down the Eagles’ bench. With a deafening roar from the student section behind him, the empty-netter was a feather on top of the cap of what Calnan believes is BC’s most important win of the year.

“I think we’ve had a string of mediocre games for us,” Calnan said. “This one was definitely a big one, especially trailing. It speaks to the character of all the guys in the locker room.”

The Eagles and Irish will surely meet again. York emphasized as much in the postgame press conference—there’ll be a nonconference matchup on the horizon. Still, with the rivalry’s future in doubt, nobody who wears maroon and gold dared miss this game. Calnan, for one, was highly appreciative, especially from the turnout of his peers.

“It’s unbelievable,” Calnan said. “Getting out there for warmups and it’s already full, and at the start of the game, it’s completely full. I just want to thank them tremendously.”

But, for as much credit as he’ll hand to the students and fans, it’s because of Calnan’s efforts that the Eagles do not leave this rivalry empty handed.

And, because of that, on Saturday night, Conte Forum shook. 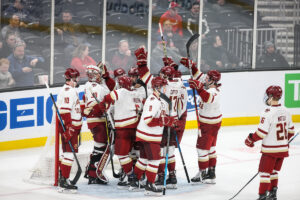