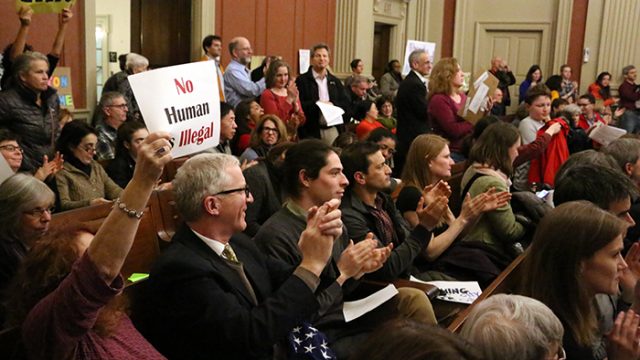 An unusually large crowd of Newton residents flocked to the Newton City Hall on Wednesday night. Many carried carefully illustrated signs emblazoned with “Immigrants Built This Nation,” or “Love Thy Undocumented Neighbor,” and some were wearing the iconic pink pussy hat or wrapped with brightly colored rainbow flags. Regardless of their appearance, these Newtonians all crowded into a large room on the second floor to attend the second city council meeting discussing the Newton Welcoming City Ordinance—an ongoing discussion that will ultimately cement Newton’s status as a sanctuary city.

Following the election of President Donald Trump as the 45th President of the United States, cities across the country declared their status as sanctuary cities. Through these proclamations, the cities cement their commitment to protecting their undocumented immigrant populations, promising that immigrants in violation of federal immigration laws will not only avoid prosecution in the city, but also have continued access to city amenities regardless of their status.

In Massachusetts, the cities of Cambridge, Somerville, Boston, Northampton, and Springfield are already considered sanctuary cities, and Salem and Newton are on the brink of joining their ranks. For Newton, which houses part of the Boston College Main Campus as well as the Boston College Law Campus, this issue came to a head on Jan. 18, when Newton city councilors first held a meeting on the proposed Welcoming City Ordinance.

According to The Boston Globe, when Newton city officials first debated the issue in the form of the ‘Welcome City Ordinance’—which was supported by Newton Mayor Setti Warren along with other city councilors—members of the public voiced their disagreement. Citizens who attended the debate “could be heard bickering with each other and with speakers,” and Newtonians protested outside of Newton City Hall, chanting about their displeasure and waving stark “No Sanctuary City” signs.

For a reputedly liberal city where 75 percent of voters supported Hillary Clinton in the 2016 presidential race, this pushback created a surprising tension within Newton. Online community forums have been actively discussing the proposed ordinance, which has been revised since the initial draft debated in December.

So at approximately 7:45 p.m, Newton city councilors met for a second time to discuss the current version of the Welcoming City Ordinance, which was released to the public on Feb. 3. A small contingent of Boston College students from Students for Education Reform attended the hearing as well, including Maria Khoudary, MCAS ’18.

The daughter of two Syrian immigrants, Khoudary expressed her anxiety at the thought of her family not being able to visit her following the immigration measure that the Trump administrations has put in place.

“I would like to make Newton safe for anyone who wants to come,” Khoudary said.

As the meeting was called into session, a beginning that elicited cheers from the public, Allan Ciccone Jr., Councilor at Large, addressed the large crowd, asking them to remain respectful and silent before highlighting the importance of this ordinance.

Former Newton Mayor David Cohen, who helped draft the ordinance, then summarized the document and the revisions that had been made over the past two weeks, also taking the time to explain the normal council protocols for the unusually large crown. Cohen explained that, for Newton, passing this ordinance would be more of a formalization of practices that Newton already has in place, just in case the new presidential administration changed their policies in the coming four years.

Ciccone then took the podium again, opening the floor to the councilors for questions.

Many councilors expressed their happiness at seeing the public outpouring regarding this ordinance before nit-picking the exact language of the ordinance.

Some councilors expressed their full support for the ordinance, and encouraged their peers to vote yes.

“We are not in the business of picking people up for immigration violations … end of story,” said one councilor.

For many councilors, their concerns mainly focused on the police department’s ability to maintain the safety of the current Newton residents, and whether Newton would remain in compliance with the federal law.

The writers of the ordinance who were present at the meeting, such as Cohen and Police Chief David MacDonald, assured the councilors that the Newton Police Department felt entirely comfortable that the ordinance would allow them to continue maintaining the safety of the Newton community. They also explained that following the careful language of the ordinance, there was no way of arguing that Newton was noncompliant with the federal government.

The chairman of the finance committee also addressed the impact that this ordinance might have on the federal funding of Newton, which provides the city with around $12 million a year. The impact would be negligible, as the language of the ordinance ensures that Newton follows federal regulations.

It was Ciccone’s final point, however, that stood out from the discussion. After confirming that this ordinance would not negatively impact the lives of Newton residents, Ciccone expressed his surprise and disappointment that none of his fellow councilors had discussed the next steps that immigrants in Newton might face, and how Newtonians might help them gain legal citizenship once in Newton.

“Let’s help these people,” Ciccone said. “If they’re having this much of a problem there must me something that we can do on this end.”

The discussion ended with a unanimous vote from the councilors present, meaning that the Welcoming City Ordinance must face a final vote of Feb. 21 before becoming an official ordinance.

In the meantime, the citizens of Newton are left to turn over Ciccone’s words and reflect on ways that they could aid those that they are eager to welcome into their community.