Home » The Artful and Stirring Nature of Rakugo Japanese Storytelling 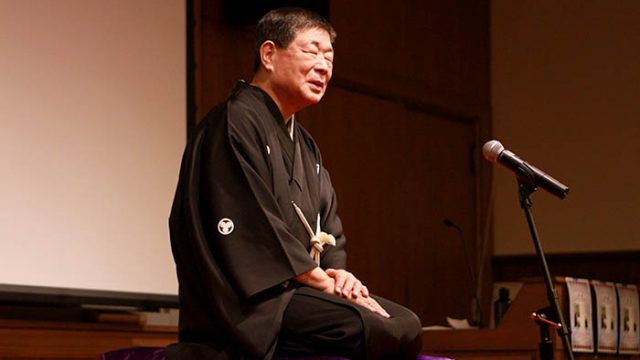 The Artful and Stirring Nature of Rakugo Japanese Storytelling

In Stokes, Japanese rakugo— a traditional comic storytelling and voice acting art—was brought to life through one man and artist, Sankyo. Using colorful language and props, the power of the medium was shown in full and emotionally charged force.

The artform, which is over 400 years old, relies on a single man, a fan, and a small tea cloth. This method of storytelling relies completely on the narrator’s ability to alternate between different characters and actions through instantaneous shifts in gesticulation, tone, and facial expressions. Sankyo maintains the highest ranking, shin’uchi, of the rakugo art. He began his journey into the craft after he was asked what he was going to do with his life after high school, the young Sankyo replied, “Rakugo.” Sankyo speaks from the heart and lives to continue the life of this artform. Even through a language barrier, his cognizant movements and clever voices reflected a masterful rendition of a historical Japanese story. With a slight tilt of the head, Sankyo entered into the dialogues of the old tale of Ikuyomochi.

This story chronicles a young working class individual, Seizou, who falls in love with a beautiful woman of the highest rank, Oiran, after seeing an image of her on a woodblock print. Seizou proceeds to work for an entire year for a chance to meet Oiran, but he must lie to her to appear affluent and worthy. When Oiran asks him when he will return, however, Seizou proceeds to tell her the truth about his life in the working-class. Oiran promises herself to Seizou, and the two go on to live a happy life after she is released from her courtesan rank.

Unlike traditional American stories that value courage in strength, this Japanese tale reflects the importance of courage in honor. Seizou is not rewarded for his natural-born abilities, but instead for his commitment to truth. Oiran points out a valuable truth, that the world is filled with lies and love is thinner than a piece of paper. There is no one like you. Even for Seizou, the honorable man, it was easier to deceive and manipulate than expand upon truth. Deception led Seizou to royalty but failed to bring him love and happiness. Only truth brought him his one desire, and with truth he found love.

Simple and compelling, the event captured the essence of this mode of storytelling. The intimacy and passion of the stories are sure to resonate with viewers.