Steve Grossman, a former chair of the Democratic National Committee (DNC) and former Massachusetts state treasurer, came to Stokes Hall on Wednesday to speak to students about getting involved in politics beyond Boston College’s enclosed campus.

In the first session of Boston College Democrats’ new series, Politics Outside the BC Bubble, Grossman covered topics across a wide political range, starting with passion.

According to Grossman, the key to successfully contributing to a campaign is to really believe in the person for which you’re campaigning.

He supported this with a personal story from the time he supported Rev. Robert Drinan’s campaign for a seat in Congress. Drinan was 40 points behind in the polls, down on funding, and was predicted by the public to lose.

Grossman told the audience of Drinan’s eventual success, attributing it all to the perseverance and passion of those backing him who truly believed he was the right candidate.

Running with the idea of passion, Grossman turned to the students and asked them to contribute to the conversation.

Grossman asked students to raise their hands if they see themselves running for office within the next 10 years and challenged them to think about how they would use that office. Students were forced to think for themselves about what changes they want to see in their government and came back with a multitude of answers.

Students had goals for solidifying and defining a Democratic economic plan, creating a path to improving rights for the disabled, and improving foreign relations through the possible creation of a no-fly zone.

After listening to the ideas produced by students, Grossman gave a specific piece of advice.

Grossman reminded students that the most important word in the English language is the word “we.”

He emphasized that with any endeavor one may take in the future, coalition-building is a central part of the process. Support is the most important component of any campaign, whether that campaign is for a person or a cause.

His advice for students looking to get experience in political campaigning is to start with a local election, rather than skipping straight to the well-known politician’s office. Students, according to Grossman, should do all of the dirty work and get involved in every aspect of the campaign, which is much more likely on the local level. He highlighted the importance of good leadership to institutions.

“Any organization that is in crisis, is in crisis because it lacks one thing principally: leadership,” Grossman said.

This lack of leadership, he pointed out, is one of the reasons that a split currently exists within the Democratic Party, which is in the midst of selecting a new chair of the DNC. Another possible cause of this, according to Grossman, is the favoritism that a large portion of the public believed was involved in this past Democratic primary, where Hillary Clinton was seen by party insiders as the presumptive nominee over Bernie Sanders.

This split in the party, Grossman stated, was a large cause of the lower Democratic voter turnout in the 2016 presidential election, resulting in a Republican win.

Grossman believes that in the future, the Democratic Party must make sure that primary elections are fair and equitable in order for its constituents to regain faith in the party. His priority is not for the next election, but for the improvement of the party over a longer period of time.

What he emphasized most for the future growth of the party is the rise of new faces that listen to and can understand the priorities of millennials, and every other demographic segment of voters.

He cited advice his father gave him as a kid—that he was born with two ears and one mouth, and he should use them proportionally.

It is up to the voters, like the students he spoke to Wednesday, to demand change from their representatives and hold them to the highest standards, according to Grossman.

“If we stand firm and speak to candidates, and demand from candidates a commitment to the things that you feel and you have articulated so passionately tonight, those candidates will measure up to your high standards,” Grossman said. “Don’t ever relax your standards.” 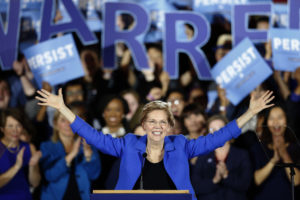 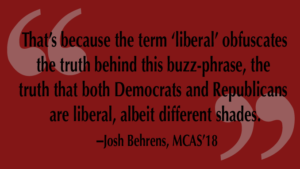