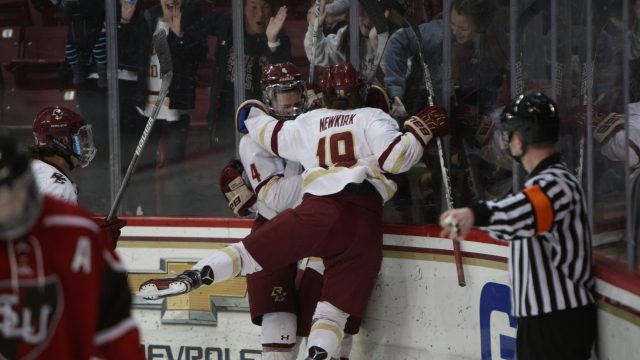 Kennedy Marchment and Brooke Webster had Megan Keller on her heels.

The No. 5 St. Lawrence forwards finished in the top 10 for the Patty Kazmaier Award this season, the top honor in women’s college hockey. Throughout the first period in the NCAA Quarterfinals against No. 4 Boston College, that tandem—along with left wing Hannah Miller—bombarded the Eagles’ goaltender, Katie Burt, forcing turnovers and putting up shots. Even when matched up against Keller, BC’s own finalist, the Saints’ powerful first line had given them all the necessary momentum to pull off the upset.

But while the Saints flaunted their top-line power, BC came back with something more powerful: depth. That’s despite losing a top-flight defender and solid forward this year, and the nation’s two best players last year. The fact that the Eagles can beat teams with so many different weapons isn’t lost on team captain Andie Anastos.

“It’s huge to know no matter what line or D pair you put out there, you have a chance to score,” Anastos said after Saturday’s game.

And with six different goalscorers, the Eagles got all the boost they would need to lift them to St. Charles, Mo.

For the third-straight season, and seventh time overall, the Eagles are headed to the Frozen Four. Behind a shutout from Burt—her eighth of the season—and a scoring outburst in the second period, BC handily defeated St. Lawrence, 6-0, at Kelley Rink. The Eagles will take on No. 1 Wisconsin in the National Semifinal on Friday at Lindenwood University’s Family Arena.

“Obviously I’m extremely happy,” head coach Katie Crowley said. “Our team has done everything that we’ve asked of them.”

In the first, the Eagles (28-5-5) received their first break from St. Lawrence (26-6-4) when Webster headed to the box for cross checking toward the end of the frame. But throughout its first 90 seconds, BC, the nation’s top power-play unit, failed to get the puck even into the opposing offensive zone. Marchment and Miller, meanwhile, put on strong pressure with a couple of breakaway chances.

But Makenna Newkirk flipped the script with a crisp pass from the near boards to Kenzie Kent. The junior forward went wrister, top shelf past St. Lawrence goaltender, Grace Harrison to give BC a 1-0 lead into the locker room. Though the Saints had “won” the opening frame, the last-second goal by Kent demoralized the team.

And St. Lawrence could never recover.

Two minutes into the second, the Eagles’ strong forecheck put pressure on Harrison. After tries from Delaney Belinskas and Caitrin Lonergan, Kristyn Capizzano made a backhanded, spinning attempt at the net. Her first shot was blocked, but Harrison, an Auckland, New Zealand native, failed to cover the puck in the crease. While Lonergan skated away, assuming the puck was covered, Capizzano kept pressing. She pushed home the puck in the empty net for BC’s second goal.

Even when St. Lawrence got its own breaks, BC didn’t let up. The Saints received two power-play opportunities in the middle of the second period. The Eagles scored on both of them.

After Keller went to the box for tripping, Kent’s strong forecheck forced a breakaway attempt around Kirsten Padalis. Anastos, whose two overtime goals last week helped clinch a Hockey East title for BC, joined her on the right side. She pushed the puck into the net past the left post for a 3-0 lead.

“I think Andie and Kenzie both have been underrated their whole career,” Crowley said of that duo. “They’re extremely dangerous when they have a player like Makenna Newkirk on their line.”

Less than four minutes later, during a Serena Sommerfield penalty, Haley McLean flipped the puck at the net, looking just to clear. Fortunately for the senior walk-on, Harrison wasn’t paying attention, and the puck floated past her high.

That misplay on the McLean goal caused St. Lawrence head coach Chris Wells to switch to backup goaltender Sonjia Shelly. But it made no difference to the Eagles.

With 1.8 seconds remaining in the first, McLean worked behind the net to find Keller. The defenseman notched her 10th goal of the season, squeezing the puck through a tight angle under Shelly’s right arm. Midway through the third period, Kent returned the favor to Newkirk with a sharp pass from the far boards. And after the game, Kent declared her determination to keep BC’s three seniors’ careers alive.

“Last game, we went into the double overtime, and my dad had mentioned to me after the game, ‘You know, that could’ve been Andie and the seniors’ last game ever,’” Kent said. “So going into this game, that was in the back of my head the entire time. I wanted to do it for our team and especially Andie, Haley, and Capi.”

The idea that BC wasn’t going to rebound smoothly from the 2015-16 campaign in which the team was the national runner-up was very real in Crowley’s mind. After all, the Eagles graduated six seniors, none of whom were slouches. That group included a strong defensive pair in Kaliya Johnson and Lexi Bender, as well as the program’s top-two scorers, Haley Skarupa and 2015 Patty Kazmaier Award winner, Alex Carpenter. In addition, BC lost second-line center Tori Sullivan and Keller’s defensive partner, Toni Ann Miano, over the course of this season. Yet with the Eagles’ strong leadership, and the fact that their young players got a lot of playing time because of the departures, they’re back in the same spot as they have been six of the last seven years.

“I’m not saying I expected to be back here, because it’s a long road, but I’m not surprised that this team was able to get back here,” Crowley said.

And for a team that had been written off by many, the Eagles are streaking right now at the one time when no one would want to play them.