When I moved to Boston, I knew the winters were going to be brutal. I did everything to prepare, buying thermal underwear, thick coats, and snow boots. When winter came, I was ready. Getting dressed in the morning was like gearing up for battle, and I treated my clothes like armor.

Coming from a tropical country where the weather is hot year round, I have fared well against the bitterly cold New England winter. I’ve learned to maneuver myself through several inches of snow, and survived the blizzards and snowstorms that rocked the Northeast.

There were even times when I did enjoy the cold. The picturesque sight of powdery, white snow covering the roofs of Stokes hall allowed me to appreciate the beauty of Boston College. I got to experiment with my style, layering different shirts and sweaters while donning colorful socks.

By the end of February, however, I had enough of the cold and was ready for warm weather. I started getting desperate and asked local Massachusetts natives when the weather would change. Their replies varied but mostly centered around the same sentiment: “This weather is so unpredictable.”

And they’re right. There are days when I put on my parka and look like an eskimo. But there are other days when I check the weather and think, “Can I wear just two layers today?” That’s an exciting feeling.

But one thing I wasn’t warned about was the wind. Growing up in a tropical country I thought I had experienced the wrath of strong winds during hurricanes. In Boston, the wind turns my face numb, and my thin hair flies in all directions, covering my face. It’s not a pretty sight.

I started to get a glimpse of hope the week before Spring Break, when the weather drastically changed, resulting in two glorious days of sunshine. On Upper Campus, swarms of freshmen emerged from their dorms to take in the warmth. They threw around a football, played spikeball, and laid on hammocks. All of a sudden, everyone’s mood changed.

It seemed like a shame to stay indoors, so I slipped on a pair of running shorts and a t-shirt and headed for the Reservoir. On my way out, I caught a glimpse of myself in the mirror and was shocked at the unfamiliar sight of my bare arms and legs.

I assumed it was the end of winter. I parted ways with my fur-trimmed parka and put it in its garment bag for next winter. I unloaded my t-shirts and laid them out in my drawers for easy access when I returned.

Spring Break came and went, but I expected to return to Boston and the cold to be gone. Instead it was back in full force with snow and temperatures in the low 30s. The winter clothes came back out, and my parka reemerged from its garment bag.

Like many freshmen, I’m convinced the heater in my room is faulty. I find myself shivering and putting on layers of clothes just to keep warm. Desperate, I try to find a knob of some sort and turn it vigorously, hoping it will do something. When my dorm room does warm up, it’s hard to get me to leave. There have been times when I’ve chosen the warmth of my bed over the walk over to the dining hall.

While I am still freezing half the time, I have noticed the weather has warmed up a touch. I now know, however, that I’m not going to get blue skies and 80-degree weather right away.

I have to remind myself that there is a season in between winter and summer and it’s not going to warm up immediately. I have been told that it’s the April showers which are coming next. Over the last few days, we have surely gotten a preview of what is to come. 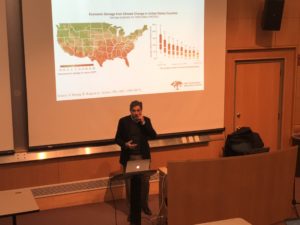 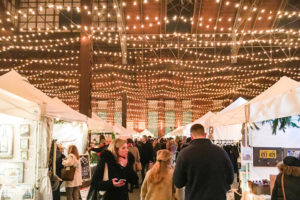