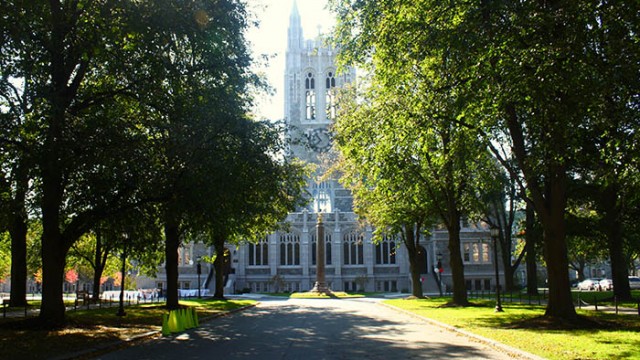 BC Releases Four-Point Strategic Plan, With Focus on Integrated Sciences

Boston College released its newest 10-year plan on Wednesday, called Ever to Excel: Advancing Boston College’s Mission, which is the result of BC’s two-year University Strategic Planning Initiative. The plan outlines four strategic directions for the University to take in order to meet BC’s stated goal of being “true to its intellectual and religious roots and seek to be the world’s leading Jesuit, Catholic university.”

“A commitment to rigorous and regular strategic planning has been instrumental in Boston College’s ascendancy over the past half century,” Provost and Dean of Faculties David Quigley said to University Communications. “‘Ever to Excel’ builds on that tradition and positions the University well for the opportunities that the next decade presents.”

Ten-year plans are critical documents because they serve as a public roadmap for the University and are often accompanied by large fundraising campaigns. The last strategic plan was supported by Light the World, a $1.6 billion campaign. It is unclear at the moment how much money BC will seek to support these new investments.

The plan’s most ambitious ideas include adding 100 endowed faculty chairs over the next 10 years and providing more resources for “targeted recruiting in response to shifting demographic patterns.” At the centerpiece of the plan is the building of an Institute for Integrated Sciences and Society (IISS), which, as reported last semester by The Heights, could be one of the largest investments in BC’s history.

The IISS is planned for the current site of Cushing Hall—with close proximity to education, business, and science buildings—and could open by 2021. The IISS mission statement calls for a cross-disciplinary, collaborative approach to solving many of the world’s most complex problems, including rises in terrorism, mass migration, revolutionary and social movements, threats to cybersecurity, and pandemics. An IISS-like project was included in the last strategic plan, although it never got off the ground.

Other aspects of the plan focus on how BC can affirm and strengthen its identity as a Jesuit, Catholic institution; creating more minors in BC’s professional schools for students in the Morrissey College of Arts and Sciences, and vice versa; expanding faculty’s amount of “internationally relevant” content in their classes; targeting financial aid programs at graduates of Jesuit secondary schools; and allocating resources to ensure success in BC Athletics.

Another section of the plan articulates a commitment by BC to supporting its more diverse student and faculty population.

“The University’s student body and workforce are substantially more diverse than a generation ago, yet challenges remain,” the document reads. “Boston College will evaluate and strengthen efforts to support diverse communities on campus and to provide care and opportunity for all who study and work at the University.”

The statement is a potential response to criticism from some corners, including LGBTQ+ students and members of the group Eradicate BC Racism, that BC has not done enough to ameliorate their concerns. Last year, Eradicate published an open letter to the Commission on Institutions of Higher Education in which it alleged that BC had not met accreditation standards in addressing the needs of students of color. The Commission received the letter although has not said yet whether it will sanction BC as Eradicate has requested.

It is unclear what exact programs or initiatives could result from the plan’s statements on diversity, although one long-running complaint from some students is that BC does not have an official LGBTQ+ resource center.

Currently absent from the document are specific details on a student center that BC has said it plans to put in the current location of the Flynn Recreation Complex—the plan was included in the last strategic planning document, and it is not yet clear why it is not included.

This story was updated to clarify that the Commission on Institutions of Higher Education has not yet announced whether it will sanction BC as a result of Eradicate BC Racism’s open letter. A previous version stated that the Commission had not acted on the letter.

uspi university strategic planning initiative ten-year plan boston college master plan
How Are You Feeling About This Coming School Year at BC?
‘Before Social Media’ Exhibit Explores Progression of Sharing and Communication