Home » BC’s “Moonshot:” Institute for Integrated Sciences and Society Could Open by 2021 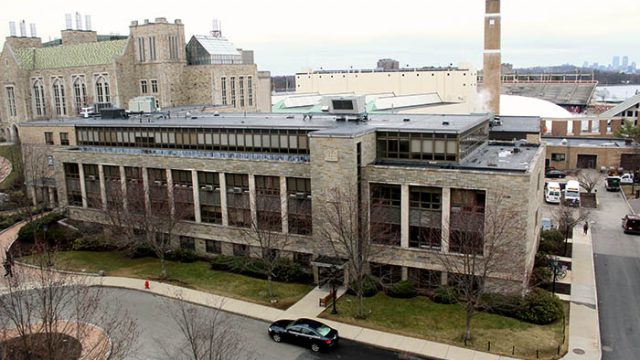 BC’s “Moonshot:” Institute for Integrated Sciences and Society Could Open by 2021

Boston College plans to construct a state-of-the-art Institute for Integrated Sciences and Society (IISS) in the current location of Cushing Hall, likely to be finished around 2021 or 2022, according to Vice Provost for Research and Academic Planning Thomas Chiles.

The IISS is a key piece of the document that will come out of BC’s University Strategic Planning Initiative, the process undertaken over the past year to set the goals of the University for the next decade. Last month, The Heights obtained the mission statement of the IISS contained in the USPI, which will not be made publicly available until later this year. The document is still awaiting final approval by the Board of Trustees.

The IISS will soon enter an approximately 18-month development and design phase, after which it will take 18 months to two years to build. Though he declined to put a specific dollar figure on the project, Chiles said the IISS is “one of the largest strategic investments the University has ever taken.”

“This is a big bet,” Chiles said. “This is basically BC’s moonshot, in my opinion.”

The IISS mission statement calls for a cross-disciplinary, collaborative approach to solving many of the world’s most complex problems, including rises in terrorism, mass migration, revolutionary and social movements, threats to cybersecurity, and pandemics.

An IISS-like project has been in the works for some time. It was included in BC’s last strategic planning effort, the University Assessment and Planning Initiative, and a webpage was set up with a leadership team and general overview, but those plans were derailed in part by the financial crisis. The page was last updated on Dec. 5, 2007. Directing BC’s integrated sciences goals has been Chiles’s primary focus as a vice provost, a position he took on in 2013 in addition to his role as chairperson of the biology department.

Chiles said that an examination of faculty’s biggest areas of strength revealed that BC had the most expertise and intellectual property in energy, the environment, and health, challenges that “lie at the root of expressions of violence, inequality, disease, and the displacement of peoples around the globe,” according to the mission statement. These themes were left purposely broad to keep the ISS flexible and “nimble,” Chiles said.

“The problems are such now that need to be addressed that science and engineering alone aren’t going to be sufficient,” he said. “We need to integrate into this the social sciences and the humanities.”

Chiles gave the example of the Ebola outbreak in West Africa, which has lasted years despite a normal outbreak length of just a few weeks. Despite the fact that the U.S. put a lot of science into the problem, relief programs did not understand that the economics of the region meant it lacked health care infrastructure, and civil war racked the whole region. Western medicine had no platform to work in, Chiles said, until it figured out a lot of other factors.

The new building will be “space unlike this campus has ever seen before,” he said, featuring a layout designed to maximize collaboration among multiple disciplines. There will be entrepreneurial labs and makerspaces, and ideas will come up organically from faculty and students. A biology lab interested in developing a device for making diagnoses, for example, could enlist a material science or physics lab next door to help build the prototype, and then work with implementation scientists upstairs to do field testing. Federal and private sources of money are now funding largely cross-disciplinary research work, and BC, Chiles said, needs to respond to that.

“That’s very different from the traditional way of how we’ve done science,” he said—departments are usually in different buildings, with siloed disciplines and, in some cases, siloed faculty.

At the same time, the academic profile of the student body has shifted. Chiles indicated that more students—about 25 percent—now have a major related to a science field, and about 40 percent of high school seniors indicate an interest in STEM. He said BC applicants also now indicate more of an interest in solving complex problems.

In addition to the actual building, the IISS, which will operate independently of any of BC’s schools and will likely be administered out of the Office of the Provost and Chiles’s office, could facilitate the addition of new majors and academic programs. One idea is to launch a minor, and eventually a major, in data science. BC’s current Global Public Health Program will likely expand to a minor and then a major. Medical Humanities, currently a minor, could become a major. Chiles is also exploring engineering, a longtime goal for BC, though he did not specify a timeline or detail how it would be developed.

It will also lead to additional faculty hires across disciplines, although there is no breakdown yet of where their assignments will be. Chiles stressed that the IISS is not specifically science-centric—putting it in Cushing Hall’s current location allows for close proximity to the School of Social Work, the Lynch School of Education, and the Carroll School of Management, in addition to the Merkert Chemistry Center and Higgins Hall. There’s also enough space that there could be room for an additional building at some point. Science departments will remain in their existing buildings.

Chiles said that when BC started to put the IISS together, it had three overarching goals. One was that it needed to be distinctive. In Boston, with among the biggest pharma and health care industries in the world, setting the University apart on health from what’s already offered is important, he said. The “and Society” part of the IISS is about making sure that what the institute does impacts society, and it aligns it with BC’s Jesuit mission. That was not a specific goal when the idea was first launched in 2007, Chiles said.

Part of the goal also relates to student formation, and helping BC students figure out what they want to do. Chiles calls them “applied tools.” The IISS could offer classes on design thinking and human-centered design.

“Regardless of their major, regardless of their ideas for how they want to impact the world, there are some basic tools, and a language that you need to acquire, in order to see your ideas actually get out in the field,” he said.

For Chiles, the IISS will help not only BC’s general reputation, but also recruitment of top faculty and students. Chiles came here in 1992, but he said this is the most exciting time he’s been at BC. 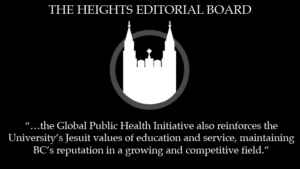 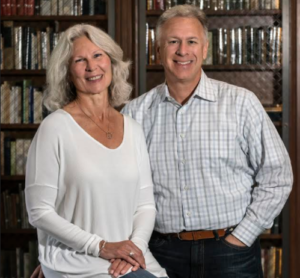