I came to the United States six years ago as an international student heading for boarding school. Many might say that, after six years, I should probably be acclimated to American culture and slang. For a while, I was sure this was the case.

I had learned to introduce myself by shaking hands instead of kissing people on the cheek, that fire trucks are not “trucks of flames,” and to communicate that I needed a mop by calling it “the opposite of the sweeper.” Things were going well.

In terms of adjusting to the climate, my school was in Connecticut and I mastered the art of Northeast winters through hibernation and layering. I thought I couldn’t be fazed. After all, once you learn how to simultaneously wear leggings, shorts, and jeans underneath your sweatpants, everything else seems like a breeze. Then I got to Boston College.

A couple of days into my first semester, I was faced with a troubling proposition. My friends wanted to go eat at “The Rat.” They seemed excited, and expected me to know that it was a dining hall. I struggled to tell them that we didn’t really eat rats in my country.

Luckily, it was closed, so we headed to “Eagle’s Nest.” I started to wonder if all the dining halls at school were nicknamed after some sort of animal. Much to my relief, they aren’t.

During my first few weeks at BC, I kept quiet as I began to learn the campus lingo. Our University has so many acronyms that it sometimes sounds like we’re speaking in cryptic code to anyone unfamiliar with our school.

An example: “After running the Res and going to the Plex, I walked down Comm. Ave. on my way to a CSOM study session at 2K.” It’s as if we think we’re going to save time by shortening every other word. Yet, by the end of the first month, I was practically trilingual.

My adjustment to life at BC did not end there, though. After my roommates understood that whenever I said “lemons” I actually meant limes, they had to get used to the way I managed time. If they wanted to leave at 8:30, they needed to tell me 8:15. For Mexicans, if you’re early, you’re too early. And if you’re on time, you’re still too early. Not even classes in Mexico start on time, as teachers understand that life happens, and we all need our morning coffee. At BC, though, I learned the way to silently open the back door of Devlin 008.

As time went on, I grew more accustomed to BC life. But adjusting has also meant dealing with how others perceive my culture as well.

Whenever I say I am Mexican, I inevitably get asked what I think about President Donald Trump. My answer: “I try not to think about him.” This is usually followed by something along the lines of, “Sorry! I don’t know how he got elected.”

Once, though, while speaking with the man behind the Dunkin’ Donuts cash register, my usual answer was followed by, “Nah, you’re too white to be Mexican.” I was late to class that day because I could not stop laughing.

Many BC students eat Chipotle almost religiously, and so I also tend to get asked if it’s anything like real Mexican food. My answer this time: “Thank you for not asking me about Taco Bell.” On the plus side, I have enjoyed making many new friends at BC because of the free burrito coupons I get from speaking Spanish when at the restaurant.

Once, I got asked if Mexicans eat guacamole daily. I answered yes, and explained that avocados are our replacement for butter, and that every good Mexican wife harvests them from her family’s special avocado tree. This particular student was so happy with my answer that I didn’t have the heart to tell him I was actually kidding.

Being an international student has been crazy so far. Some days I feel like I fit in brilliantly. After all, dealing with the visa paperwork (F1, J1, H1B, I-94, OPT, CPT) is just like using BC acronyms.

Other days are harder. When I forget English words and start waving my arms around as if that’s going to help, I end up saying things like “the reverse floor” when I want to say “ceiling.” Being a foreigner at BC has been quite the ride so far and, now that I’ve learned that it’s a tradition, I can’t wait to hold the door open for people when they’re still halfway across the room. 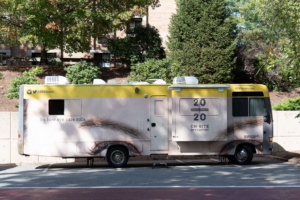