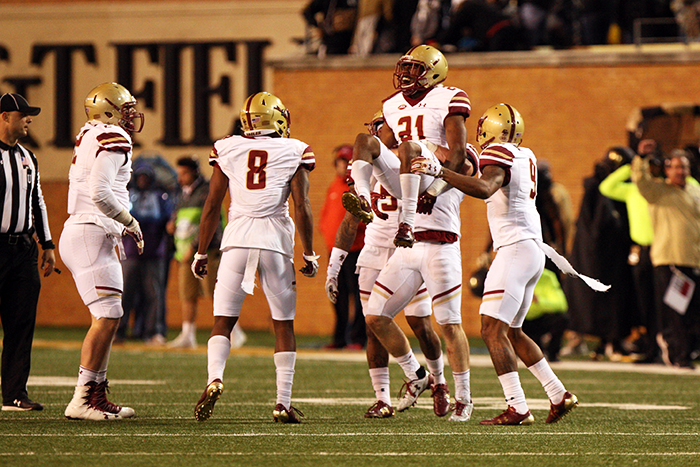 Against Northern Illinois, Eagles Must Limit Turnovers, Stop the Run

There’s something about the beginning of a new season that can reignite the dying embers of hope in even the most jaded of supporters. Blessed with a clean slate, many teams are freed from the burdens of past failures and have the chance to take control of their own narrative once again. But for an unfortunate few, this turning of the page represents more of the proverbial last chance than the return of boundless optimism.

Entering Year Five of the Steve Addazio era, Boston College appears dangerously close to falling into this category. Despite winning the Quick Lane Bowl in a thrilling contest with Maryland—the first bowl victory in Addazio’s tenure at the school—BC’s 2016 performance showed several concerning cracks beneath the surface. Three of the team’s wins came over teams ranked 117th or worse (out of 128 FBS teams) by Football Outsiders 2016 S&P+ ratings and one win came over a lowly FCS team (Wagner).

The team lost its four games against top-20 S&P+ teams by an alarming 202-24 margin. A defense that had been as good as any unit in the nation—aside from Alabama—under Don Brown in 2015 suffered from a sudden inability to prevent explosive plays. The issue was exacerbated by the lack of aid provided by a run-oriented offense that averaged a paltry 3.4 yards per carry, with Jon Hilliman struggling to find both the running lanes and form he exhibited in his 2014 freshman campaign.

Once again heading into the season with a quarterback that didn’t start the previous season and with a new athletic director overseeing the program, the pressure to perform has reached a level not usually seen on opening day. The Eagles carry this burden into a schedule that has a drastically improved non-conference schedule, one without an FCS team and with only one opponent ranked worse than 100th in Football Outsiders 2016 S&P+ ratings. Making matters worse, BC begins the season by playing a non-conference opponent in its home stadium.

Fortunately, as the Eagles head west for a Friday night matchup with the Northern Illinois Huskies, they will find a team faced with a bevy of roster questions. NIU looks to rebuild its once-proud reputation and rebound from a disastrous 5-7 campaign in 2016, where the program missed a bowl game for the first time since 2009. Head coach Rod Carey’s team heads into the 2017 season searching for a long-term answer at quarterback after starting five different players at the position over the last two seasons.

With either redshirt junior Ryan Graham or redshirt sophomore Daniel Santacaterina set to take the reins of the offense—much like Addazio, Carey likely knows who he will start at quarterback Friday night, but steadfastly refuses to divulge the decision—the Huskies will have a relatively inexperienced signal caller under center. The new quarterback will likely be thrown into the fire from the opening kickoff, as NIU’s top offensive weapons from last season have since departed. Running back Joel Bouagnon, a dependable workhorse that racked up at least 800 rushing yards each of the last two seasons, and receiver Kenny Golladay, a 6-foot-4 mismatch that tallied over 1,100 receiving yards each of the last two seasons, both graduated from the program this past spring.

In the backfield, senior running back Jordan Huff appears ready to shoulder the bulk of the carries. After operating as a change-of-pace back for most of the last two seasons, totaling 703 rushing yards in 2016 and averaging an impressive 6.3 yards per carry, Huff will move into a featured role this season. Despite his speed, Huff has a 218-pound frame, so he should have the ability to handle an increased workload. He’ll look to run behind the left side of his offensive line, which features All-MAC left tackle Max Scharping.

On the outside, NIU lacks the same quality of replacement for the departed Golladay. Senior receivers Christian Blake and Chad Beebe, along with senior tight end Shane Wimann, will try to serve as a reliable committee of pass catchers for Carey’s team. Blake, the team’s second leading receiver last season, figures to be the team’s top target.

With a unit devoid of stars and filled with players still learning how to take charge of featured roles, NIU’s offense will likely rely heavily on Carey’s offensive scheme to gain yards. The Huskies have traditionally featured a dual-threat quarterback and multiple running backs and receivers with great skill in open space. The offense is built on the read-option and pre-snap motion, using misdirection and fakes to stretch a defense horizontally. Carey likes to call for the jet sweep, where a running back will sprint horizontally across the field, passing the QB just after he has taken the snap. From this action, they can hand it off to the player running the sweep, fake it and run with either the quarterback or the running back, or use the fake to open up short distance play action passing. The offense leverages the threat of one player running the football to open lanes for another.

Through pre-snap motion and play-action, the Huskies effectively disguise their offense and can run many plays from the same setup. While their aerial assault isn’t the most complex—heavy on screens, slants and other short routes—this motion creates enough space to make it work. BC’s defenders must stuff NIU’s horizontal run game and stick to their assignments so as to not fall for Carey’s trickery. The impressive sideline-to-sideline speed of the Eagles’ front seven will likely force the Huskies into attempting more conventional running plays, which plays right into BC’s hands. If the run game grinds to a halt, the play action pass game won’t be able to open enough space down the field, rendering NIU’s short passing game highly ineffective. The Eagles’ defense can make light work of the Huskies’ offense if they force them into a large number of passing situations.

On the other side of the ball, NIU’s roster turnover once again plays into BC’s hands. The Huskies return a deep, experienced and ballhawking secondary, led by senior cornerback Shawun Lurry. Their ability to force turnovers helps to create short fields for the team, a skill that is quite valuable given the offense’s lack of experienced players. The front seven has, however, undergone a significant overhaul since last season. Four of the Huskies’ top six defensive linemen are gone, along with three of their top five linebackers. The roster only has one defensive tackle that had more than five tackles last season and the two candidates to replace departed middle linebacker Jamaal Payton combined for just 16 tackles last season. While its edge defenders have some prior experience, NIU is extremely vulnerable up the middle.

On Friday night, look for the Eagles to go to the power run game early and often, finding much more success than they usually do with this plan of attack. Hilliman and freshman A.J. Dillon should find numerous creases between the tackles, allowing BC to control the clock and string together some lengthy drives. Expect the passing game to be very cautious. In addition to the obvious inexperience of whoever starts under center, turnovers represent the only real way NIU will be able to take control of this game. Limiting ill-advised interceptions is crucial in avoiding this outcome.

Facing an opportunity to rediscover the power run game and stifle explosive playmakers, the Eagles can quickly show that they’ve made progress on shoring up last season’s weaknesses. And if they can capitalize on this golden chance, the team could soon find itself shedding loads of external pressure and rediscovering the mental freedom of a new season.