Home » LTE: A Response to “Looking Forward to a Progressive Future” 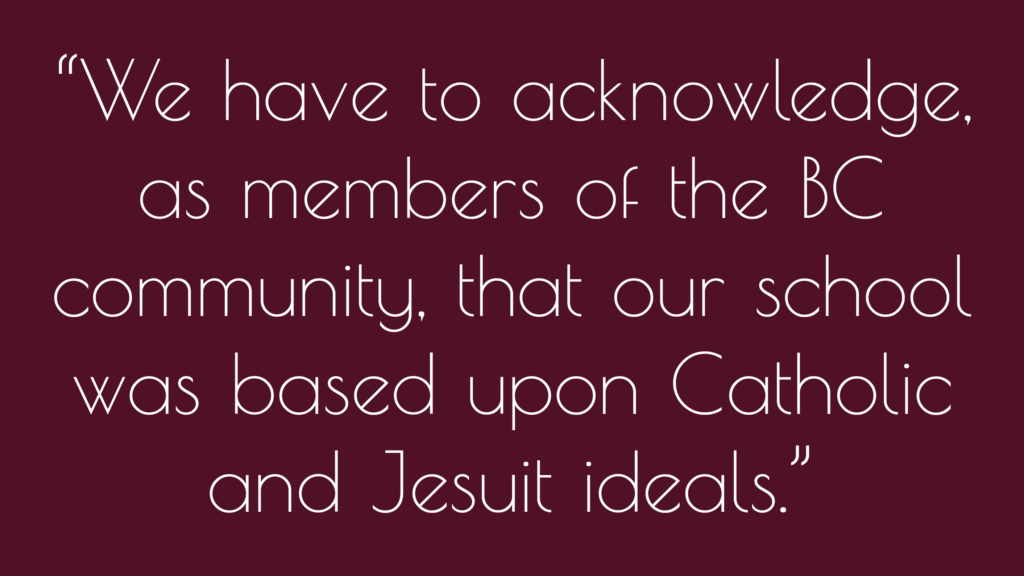 LTE: A Response to “Looking Forward to a Progressive Future”

Dear readers of The Heights,

I am writing to express my concern over the recent Heights column entitled, “Looking Forward to a Progressive Future,” by Michael Razis. Though I may agree with some of the article’s auxiliary propositions, I take issue with both Mr. Razis’ suggestion that Father Leahy has behaved “hypocritically” regarding students’ desire for a university-run LGBTQ center on campus along with the insinuation that the University should enact a LGBTQ center on campus at all.

Towards the beginning of the article, Mr. Razis brings up concerns that are of utmost relevance in today’s social and political climate, such as the University’s “dramatic transformation in diversity” and the administration’s “efforts to support diverse communities.” These are, no doubt, noble causes, and I support them fully.

My issue comes with the fact that Mr. Razis openly attacks Father Leahy and the Boston College administration as a whole for not enacting a BC-funded LGBTQ center when Father Leahy and BC are merely exhibiting the very Jesuit ideals this University was founded upon in 1863. How can you ask Father Leahy, as a representative of the Catholic Church, the Jesuits at Boston College, and the BC administration, to counter the principles that this University was founded upon to support an LGBTQ center?

The Catholic Church, as it stands today, is firmly in support of traditional marriage and traditional relationships, i.e. heterosexual relationships. Regardless of one’s personal beliefs on these topics, we have to acknowledge, as members of the BC community, that our school was based upon Catholic and Jesuit ideals and that our administrators must stay true to such ideals. We cannot ask Father Leahy to act in contradiction of the very values that he is supposed to be a symbol of on campus. Therefore, I would argue that in standing with his deep seated Jesuit ideals, Father Leahy is behaving in the exact opposite of “hypocritical.” The dictionary definition of hypocrisy is “having a pretense of principled beliefs that one does not actually possess.” If, and only if, Father Leahy were to endorse an LGBTQ center, he would be behaving “hypocritically” toward his Catholic and Jesuit beliefs.

Mr. Razis brought up the issue of Georgetown University’s foundation of an LGBTQ center and asked why BC could not do the same. In founding this center, Georgetown has acted in opposition of its founding beliefs and the Catholic Church. An organization cannot claim themselves to represent the Jesuits and the Catholic Church while encouraging topics that Catholics and Jesuits stand firmly against. If BC were to enact an LGBTQ center, the University would be contradicting its foundational values and would cease to represent both Catholicism and the Society of Jesus. If BC students wanted to attend a school with a university-run LGBTQ center, they shouldn’t have chosen a Jesuit, Catholic university because those ideals clearly conflict.

10 COMMENTS ON THIS POST To “LTE: A Response to “Looking Forward to a Progressive Future””