Home » Football’s Freshman Class Coming Into Its Own 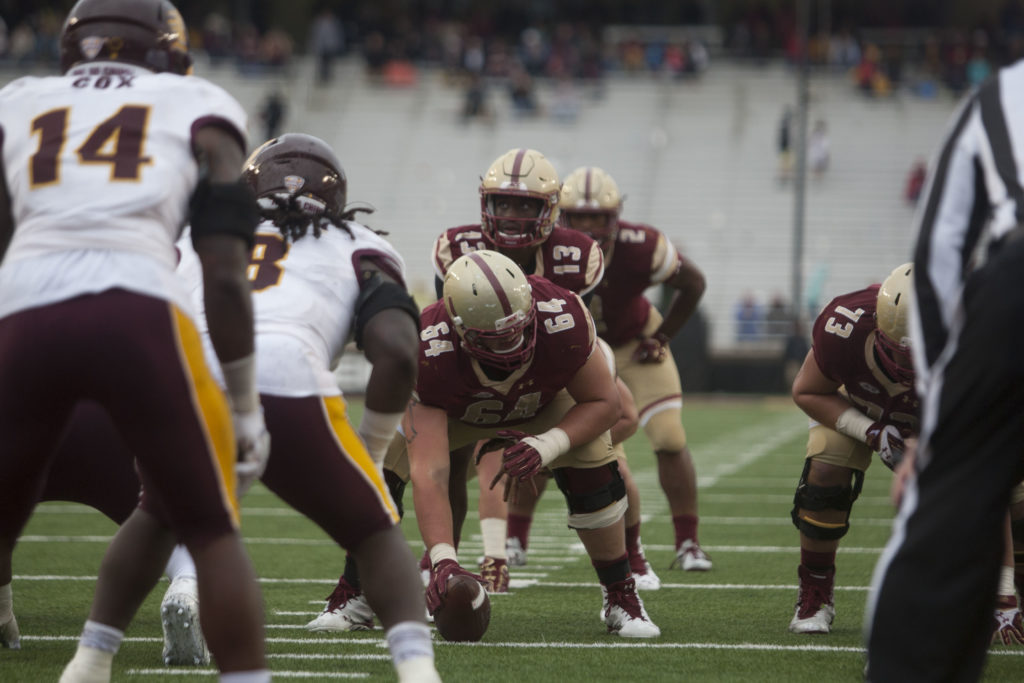 Football’s Freshman Class Coming Into Its Own

In Boston College football’s 41-10 dismantling of previous one-loss Virginia on Saturday, nearly all of the Eagles’ highlight-reel plays came at the hands of rookies. The quarterback who posted the highest rating in college football last week? The team’s leading receiver? The linebacker who returned an interception for a touchdown? The team’s workhorse running back? Two offensive linemen, including the center? All freshmen.

BC is growing as the season progresses, and it’s development is a large reason why it enters a primetime Friday matchup against Florida State with plenty of confidence.

“People asked at the beginning of the year, ‘how come you’re so upbeat?’” head coach Steve Addazio said after practice on Tuesday. “It’s because I knew what the future’s going to bring. You’ve seen that develop. I appreciate the fact we’ve got all these guys coming back—it’s nice to take a pause and say, wow, that’s coming.”

Quarterback Anthony Brown entered the UVA game, having completed just 5-of-17 passes in the win over Louisville the week prior. Not to mention that he was nursing a shoulder injury that he had reaggravated against the Cardinals. Regardless, Brown came out ready to play, attacking a Cavaliers secondary that was one of the best in the country. Brown completed 19-of-24 passes for a career-high 275 yards and three touchdowns. He added 32 yards on the ground as well, and is beginning to flex his muscles as more rollouts and bootlegs are added to the playbook.

“We’re trying to increase the diversity in our offense a bit,” Addazio said.

That being said, he knows that with a redshirt freshman, he must take a cautionary approach.

“All of a sudden, you can overload a young quarterback and it looks a little nasty. Right now, [Brown] has a good comfort level and that’s important.”

Part of the growth on offense can be credited to true freshman running back A.J. Dillon, who has clearly won the No. 1 spot on the depth chart over redshirt junior Jonathan Hilliman. Dillon, who led the team in carries on Saturday with 24, had a coming-out party in the Louisville win. A monumental 272-yard, four-touchdown performance established himself as the next big Eagles running back, following in the footsteps of Andre Williams.

Dillon has had plenty of holes open in front of him, in part due to the resurgent offensive line that has fought off its share of injuries. Center Ben Petrula has stepped up ever since Jon Baker went down with a knee injury in Week One, and he’s improved by the week. The Eagles’ offensive line as allowed just seven sacks, good for first in the ACC.

Not only does BC have freshman leading the way in passing and rushing, but its top receiver is also a freshman—Kobay White—making the Eagles the only team in the country to feature such a trio. White has a team-high 24 catches for 313 yards and scored his first touchdown against UVA, taking an inside screen 76 yards to the house.

It’s more of the same on the defensive side of the ball. The last time a BC freshman finished the regular season as a top-10 tackler was in 2012, when current Denver Broncos strong safety Justin Simmons finished seventh on team with 52 total tackles.

“He’s a young guy but he’s come a long way,” Ty Schwab, his teammate in the linebacking corps, said. “He works hard and studies really hard. He meets with Coach [defensive coordinator Jim] Reid all the time, and makes sure he knows his stuff going into games.”

The start of the year certainly was rough, but Brown and his fellow first-year players have taken tremendous strides. Addazio described young players as having “rollercoaster” seasons, but entering a huge Friday night game, the freshmen are heading straight up.