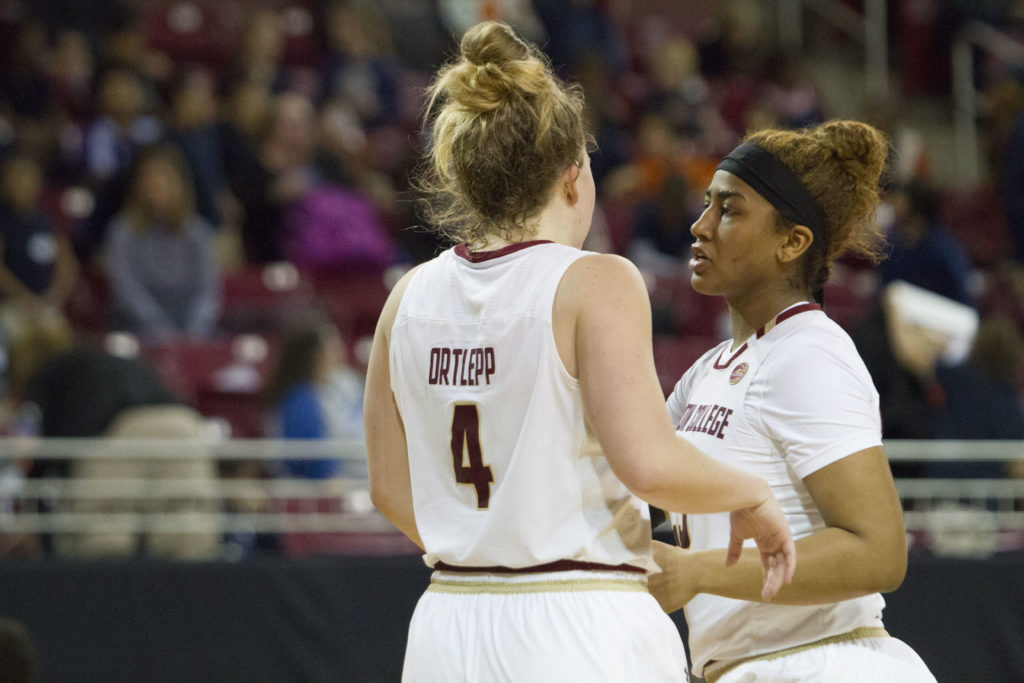 BOSTON — So far this year, Boston College women’s basketball has yet to string together a winning streak. Having alternated wins and losses throughout the first five games of the season, the Eagles got another chance to rattle off a potential second-consecutive victory on Sunday afternoon against Boston University. But, once again, BC reverted back to its losing ways.

A late run from the Eagles wasn’t enough to overcome a 19-point fourth quarter deficit, as BC fell to the Terriers, 61-57. Sydney Lowery led BC with 18 points, but only one other Eagles player reached double digits, as the team’s offense struggled to break the Terriers’ press defense. BU point guard Katie Nelson scored 19 points and hit five 3-pointers to finish off the Eagles.

The Eagles only came up six points short of their scoring average (63.5), and held the Terriers under their typical 69.4 points per game. But BC failed to take advantage of what appeared to be a weak BU defense. On average, the Terriers allow just a bit more than 72 points per game. But on Sunday, they limited the Eagles to just 57—a dominant performance that frustrated BC head coach Erik Johnson.

“I thought our offense never flowed tonight, and when it did, we didn’t knock down open shots,” Johnson said. “I mean, how many open layups did we miss tonight? BU gets a lot of credit. They hung on, they fought.”

Early on, though, the Eagles were able to pick BU’s press apart. The Terriers started applying pressure with a little over four minutes to go in the first quarter, and it only intensified. But BC picked the Terriers’ defense apart with crisp passes, ending up with multiple open layups and earning a few and-one opportunities. Only when BU eased the pressure, dropping a few players back and leaving just one wing player in the backcourt to pressure whatever BC player was handling the ball, did the Terriers begin to make defensive hay.

Toward the end of the second quarter, Nelson began to heat up. Whether it was off picks or when Beaudry passed successfully out of double-teams to the point guard, she brought BU back into the game. With less than two minutes to go in the second, BC held its largest lead at seven points. But at the end of the half, the Eagles were only up one, and Nelson had 11 points— all of which she scored in the last five minutes of the period.

Both teams went back and forth during the majority of the third quarter, but in the last four minutes the Terriers began to pull away. Naiyah Thompson and Corrine Williams hounded BC’s Andie Anastos and Taylor Ortlepp in the backcourt. Often, Milan Bolden-Morris entered the backcourt to help whichever point guard was the primary ball-handler at the time to ease the pressure, but the group started to try to force its way through openings, and it cost them. BU outscored BC, 14-8, in the third quarter, which may have cost the Eagles the game.

The trend didn’t change in the fourth quarter. The Terriers stretched the lead to 19 with less than five minutes remaining in play, all but putting the game out of reach. But the Eagles pulled themselves together and began pressing. Meanwhile, BU parked the bus, halted the press, and tried to dribble out the clock by utilizing all 30 seconds of the shot clock.

Unfortunately for the Terriers, the strategy backfired. With under a minute to go, the BC press forced a turnover and Lowery hit a jumper to cut the lead to eight. On the ensuing inbound pass, Anastos stole the ball, seemingly giving the Eagles an opportunity to cut the lead to five or six, but Georgia Pineau, who played 31 tough minutes in one of her best games of the year defensively, missed a layup and BC couldn’t get its hands on the rebound. The Terriers would miss three of their final four free throws, keeping BC in the game as Ortlepp and Bolden-Morris hit triples to reduce the lead to BU lead to three. But after the one BU free throw landed, Ortlepp’s final 3-point attempt was blocked and the game came to an end.

“It’s easier to play loose when you get down 19 points,” he said. “I’d love to say we finally got our mojo, but to be honest we had no choice. So we need to be able to play with, not reckless abandon, but play loose, swing the ball.”

In a sense, the performance was typical of this Eagles team. Not only has it traded wins and losses this season, but its scoring production has also been up and down. Johnson mentioned that his group is very young, and that he often plays two freshmen and three sophomores on the court at the most vital points of the game. Consistency is key as those players gain more experience.