Last year, Boston College football safety Lukas Denis recorded seven total tackles. He matched that mark again this season—not in tackles, but in interceptions, tying Iowa’s Joshua Jackson and Florida Atlantic’s Jalen Young for the nation lead and the fourth-most in BC single-season history. And now, just a week and a half after being selected for the All-ACC second-team, the first-year starter is an All-American.

On Thursday, the Walter Camp Football Foundation announced that Denis was one of four defensive backs to earn second-team honors. He joins defensive end Harold Landry, a second-team member last season, as one of 13 Eagles to ever receive the distinction. But as far as BC defensive backs are concerned, Denis is the first player to be named a Walter Camp All-American since former Indianapolis Colt Jamie Silva, back in 2007.

To go with his seven interceptions—five of which came in the first month of the season— the Everett, Mass. native has broken up 16 passes this year, the 11th-most in the FBS. If Denis gets his hands on the ball, there’s no telling when he’s going down. On average, the junior has returned interceptions 25.6 yards in 2017. Not only is Denis a ball hawk, but he’s also one of the Eagles’ most reliable last tacklers. He racked up 80 tackles during the regular season, more than all but three of his teammates.

Unless Denis decides to pursue the upcoming NFL Draft, he, along with Will Harris, will be the only two starters on BC’s backend returning for the 2018 season. 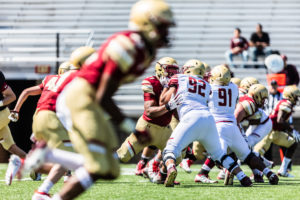