Home » Eagles to Play Spitting Image of Themselves in Pinstripe Bowl 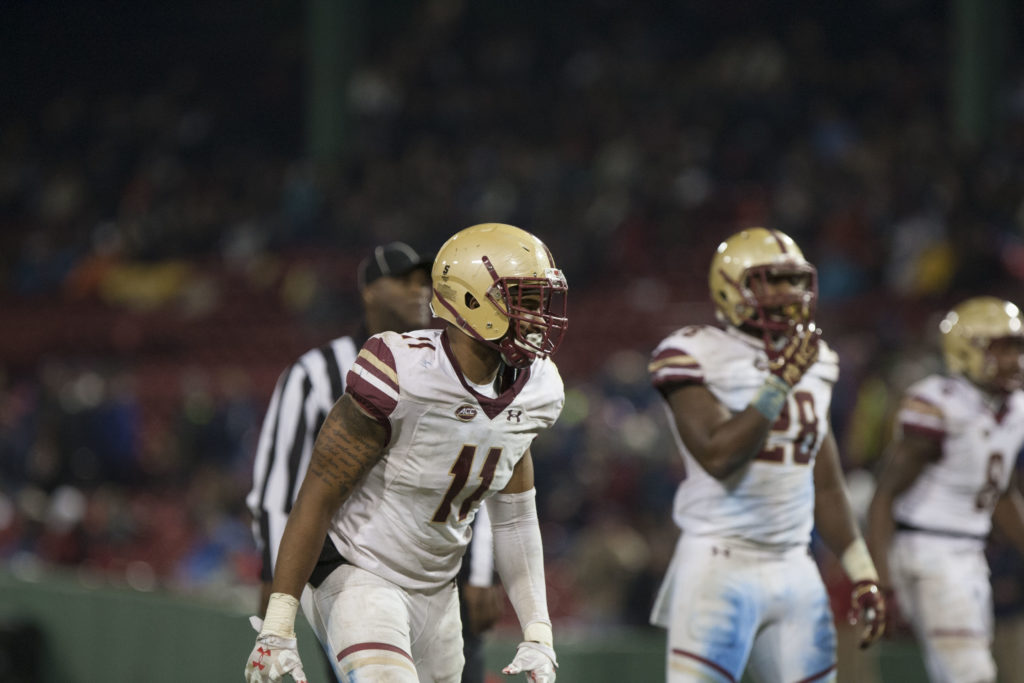 Eagles to Play Spitting Image of Themselves in Pinstripe Bowl

As the game clock ticked agonizingly slow to zero and Duke’s Grayson Allen trudged off the court—sporting a nasty bruise over one of his eyes—Boston College men’s basketball fans gleefully stormed the court at Conte Forum. There was a palpable joy in the air from beating the No. 1 team in the country, just days after losing Teddy Hawkins to a season-ending knee injury.

But just as importantly, the early December win was so meaningful because the Eagles beat Duke. They had beaten a program that is equal parts present talent and mythical aura—a cloud of arrogance, supreme skill, and incessant winning, stretching from Christian Laettner to Shane Battier to Allen.

All of which goes to say that BC football (7-5, 4-4 Atlantic Coast) fans must’ve felt incredibly guilty rooting for Alabama to make the College Football Playoff earlier this month. If Ohio State had made the Playoff, a chain reaction would’ve cascaded through the bowl season, knocking BC from desirable Tier I bowl games into one of the oddly named bowls played before Christmas—thus requiring a disconcerting amount of #RollTide content floating around Chestnut Hill.

But with Alabama snagging the fourth and final spot from the selection committee, the Eagles managed to secure a spot in the New Era Pinstripe Bowl at Yankee Stadium for the second time in four years. And in a wonderful coincidence, BC’s opponent on Wednesday in the Bronx will be the very team that is responsible for sending Alabama to the Playoff over Urban Meyer’s team, a team whose fundamental view of football is strikingly similar to Steve Addazio’s.

The Iowa Hawkeyes (7-5, 4-5 Big Ten) enter the Pinstripe Bowl boasting a resume that includes a 55-24 home drubbing over then-No. 6 Ohio State, a defeat that permanently stained the Buckeyes’ Playoff credentials. The game will mark the 15th bowl appearance for Coach Kirk Ferentz in 19 seasons at the helm, with his team looking for its first bowl victory since the 2010-11 season.

“This is a typical Iowa team. That’s why I respect it so much,” Addazio said during last Monday’s press conference, per BCEagles.com. “Everything is fundamentally sound and schematically sound. You’re not going to catch them schematically or anything else. They play physical, hard [and] run to the football on defense.”

Ferentz runs a pro-style offense, with a significant portion of the snaps under center and an emphasis on establishing the power run game to set up a heavy dose of play-action passing. Tempo is slowed in favor of ball control, with the offense huddling to call a play before basically every snap.

Sophomore quarterback Nathan Stanley serves as the triggerman. A stereotypical 6-foot-5 pure pocket passer, Stanley has thrown an impressive 25 touchdowns to just six interceptions this season. He moves well in the pocket and has the arm strength to make all the throws in a pro-style offense. On the downside, he completed just 56 percent of his pass attempts, 100th out of 126 qualified FBS quarterbacks. This inability to connect through the air prematurely truncates drives, as the Hawkeyes only pick up at least one first down on 57.7 percent of their possessions, an embarrassing 124th nationally.

Despite this, on drives that do pick up a first down, Iowa scores a touchdown 46.8 percent of the time, 20th in the country, indicating a unique ability to methodically march down the field and find the end zone. A huge component of these successful drives is the power run game, driven by senior running back Akrum Wadley, who turned a career-high 230 carriers into 1,021 yards and nine touchdowns. The Hawkeyes won all five games in which Wadley ran for at least 100 yards this season.

Though not extremely explosive, Iowa uses a lot of stacked formations in the run game, with multiple tight ends and a fullback, looking to provide consistent yardage for Wadley. Aside from some slightly concerning struggles in short-yardage situations—Iowa ranks 107th nationally in conversion rate on third and fourth down runs with two or fewer yards to gain—the strategy pays off. The Hawkeyes linemen frequently win the battle of the trenches, springing Wadley to the second level. In the Pinstripe Bowl, the line will have to adapt without star redshirt freshman left tackle Alaric Jackson, who is suspended for a violation of team rules.

After a few successful runs, Ferentz can call for play-action passes out of the same formations, completely fooling any defense that has overcommitted resources to stuff the run. Stanley frequently hits receivers behind the linebackers, with plenty of room in the middle of the field to pick up additional yardage. Junior receiver Nick Easley leads the team with 498 receiving yards and is quite comfortable running routes over the middle. In addition, in the red zone, Stanley will target 6-foot-5 Noah Fant. The sophomore tight end has just 28 catches on the season, but 10 of them have gone for touchdowns, as he tends to use his massive frame to box out defenders and reel in passes in the end zone.

On Wednesday, this matchup will turn into a mental game for the Eagles’ defense. Having faced a bevy of spread offenses and no huddle teams this season, the switch to a slower-paced opponent is appealing to some of the players, including senior linebacker Ty Schwab.

“They huddle, so that’s going to give us time to decipher where they’re lining up and be able to set the front and make our checks and kind of get ready to go before every snap and rushing everywhere,” Schwab said early last week.

Winning the pre-snap battle will be vital to success in this game. If the Hawkeyes’ offensive linemen can get to the second level, it will be really tough to stop Wadley from running downhill. On the other hand, if the Eagles check into the correct alignment and the linebackers and safeties flock to the correct gaps, Iowa might end up punting much more than it anticipated. Getting pressure up the middle in Stanley’s face will also be important, netting sacks, errant throws, and maybe even a few interceptions.

On the other side of the ball, Iowa plays a physical, ballhawking defense reminiscent of BC’s unit. Ferentz’s unit is tied for third in the country with 19 interceptions—one more than the Eagles’ defense. Projected first round NFL draft pick Josh Jackson has seven interceptions—including three in the Ohio State game—and gives the Hawkeyes a physical, 6-foot-1 cornerback than can neutralize the toughest opposing receiver in man coverage. Their secondary loves playing tight coverage and sitting on underneath throws, displaying great ability to drive on the football and either break up passes or force turnovers.

Iowa’s front seven is no joke either. Led by consensus All-American linebacker Josey Jewell—who won Big Ten defensive player of the year with 121 tackles, 11 passes defensed and two interceptions—the Hawkeyes have allowed opponents to score a touchdown on just 18.4 percent of their drives (16th nationally), not to mention just 17 touchdowns on their opponents’ 36 red zone trips. They are also incredibly stingy in short-yardage run situations, ranking sixth among FBS defenses in preventing run conversions on third and fourth down with two or fewer yards to gain.

In the Pinstripe Bowl, expect the outcome of the game to hinge on whether the Eagles can outmuscle the Iowa front seven to create running lanes for A.J. Dillon. The true freshman has been dominant in the back half of the season, with at least 149 rushing yards in five of the Eagles’ six contests. Some other running backs—most notably Wisconsin’s star freshman running back Jonathan Taylor—have made do against the Hawkeyes’ physical defense. If BC’s offensive line can continue its recent history of opening gaping holes against quality run stoppers, the team will be able to control both the clock and the football game. Additionally, Darius Wade must prioritize taking care of the ball against such a talented secondary, by far the best defensive backfield he’s seen as the starter this season.

The game will offer fans an illuminating look into the art of smashmouth football. These two teams have relatively few secrets to hide, especially with a full season of tape on record. Wednesday’s game will likely not be won by some radical, Earth-shattering offensive innovation. Instead, the teams will play old school football, and players like Schwab couldn’t be more excited.

And at the end of the day, it’s that kind of excitement for a physical, low-scoring matchup that will ultimately allow BC fans to forgive themselves for giving into the Saban worship for a brief moment.