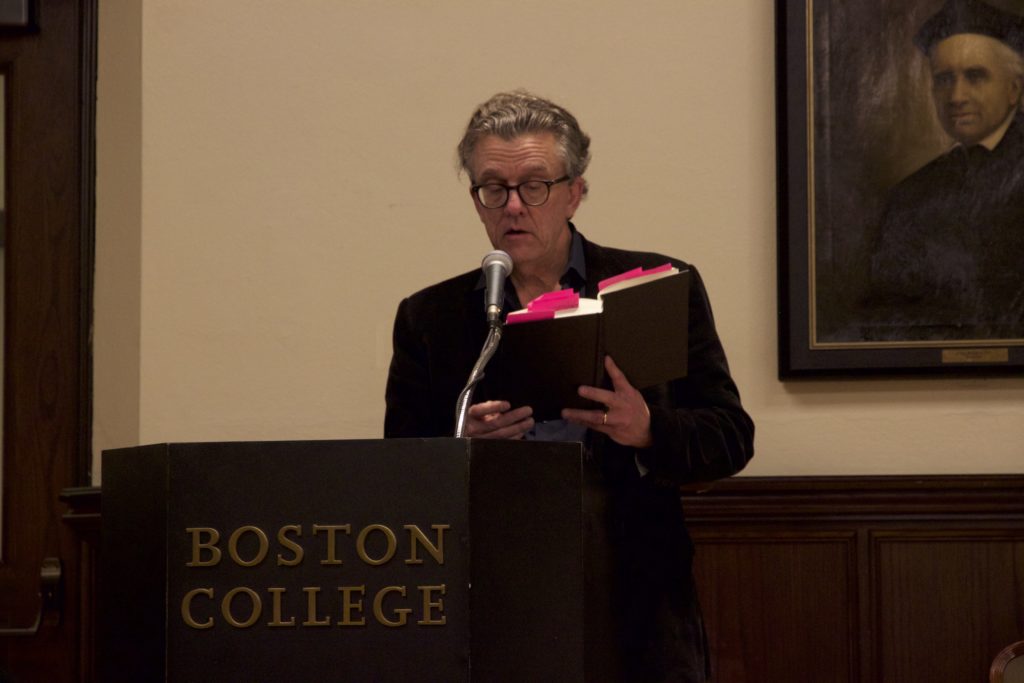 Kurt Andersen, a groundbreaking novelist, media entrepreneur, and public radio host, read selections from his new book Fantasyland: How America Went Haywire: A 500-Year History on Wednesday evening as part of the Lowell Humanities Series. In Fantasyland, Andersen explores the historical origins of the “post-factual, fake news moment we’re all living through,” arguing that truth-bending is something embedded in America’s national character.

In Wednesday’s reading, Andersen focused on three key points in American history that most significantly contribute to our current situation: the Puritans’ arrival to the New World, yellow journalism, and popular culture entertainment blurring the lines between reality and fantasy.

According to Andersen, a tendency to replace the objective with the subjective is a central aspect of what makes us American. From the Salem Witch Trials in the 17th century to conspiracy theories regarding vaccines, UFOs, and creationism to the 2008 Financial Crisis—which Andersen described as a result of people fantasizing that they could live like the rich—Americans were engaging in fantasization before the country’s genesis.

“This is American exceptionalism in the 21st century,” Andersen said. “Our drift toward … doing our own thing, and having an altogether uncertain grip on reality has overwhelmed our other exceptional national traits and turned us into a less-developed country as well.”

Andersen traced the beginning of Americans’ tendency to fantasize to the Puritans, who initially broke away from the Church of England to practice their own version of Christianity. They eventually yielded numerous subgroups, each with their own “truth” as to how God should be worshipped and what a good Christian is comprised of. One particular subgroup of the Puritans—the Pilgrims—eventually found their “promised land” in the United States, sowing the seeds of fantasization in the New World.

Andersen then read sections discussing the original generators of systematic fake news: yellow journalism newspapers of the 19th and early 20th centuries. In particular, Andersen focused on The Sun’s “Great Moon Hoax,” a series of six articles that falsely announced the discovery of life forms on the moon. Andersen not only explained that the story had grains of truth to it and that it seemed plausible, but also noted that people avidly defended the story even after it had been disproved. It seemed that the entertainment value had won everyone over.

“To express a doubt on the genuineness of the great lunar discoveries was considered almost as heinous a sin as to question the truth of Revelation,” Andersen said. “The news was believed not just by the rafters … [s]tudents, professors, doctors of divinity and law, and all the rest of the reading community looked daily to the arrival of the New York mail.”

Influenced by these sensational stories were a generation of entertainers—including P.T. Barnum—whose bread and butter was blurring the lines between the real and imaginary. Barnum opened his American Museum, which housed various hoax attractions.

“If some imaginary proposition is exciting and there’s no way to prove it untrue, then it is my right as an American to believe it is true.” Andersen said.

Andersen argued that Barnum’s fundamental fantasyland mindset and defense for it started a turn towards anti-Enlightenment thinking. Barnum’s plausible, but fake, objects made it difficult for audiences to distinguish between hoaxes and authentic artifacts.

The development of digital technology has further enabled our fantasizations by giving them a new level of “authenticity.” Andersen argued that advances in virtual reality and computer-generated imagery technologies have made our fantasies—which we were previously able to distinguish as fantasies—as authentic as reality. Even the web’s anonymity has allowed users to become alternate versions of themselves, acting in ways we would never have thought to do in real life.

Although he painted a bleak picture, Andersen holds hope for Americans to break out of this cycle of fantasization. He pointed to the numerous accomplishments America has achieved, such as decoding the human genome and electing an African-American president, despite having trouble distinguishing reality from fantasy. Additionally, he looked to humanity’s versatility, hoping Americans would be able to snap out of fantasy and live lives of reason.

“I do despair,” Andersen said. “But not everything has gone wrong … These last few decades may have turned out to be a phase … an unfortunate episode in the American experiment that finally will pass and can be chalked up to experience. America may now be at peak Fantasyland. We can hope.”