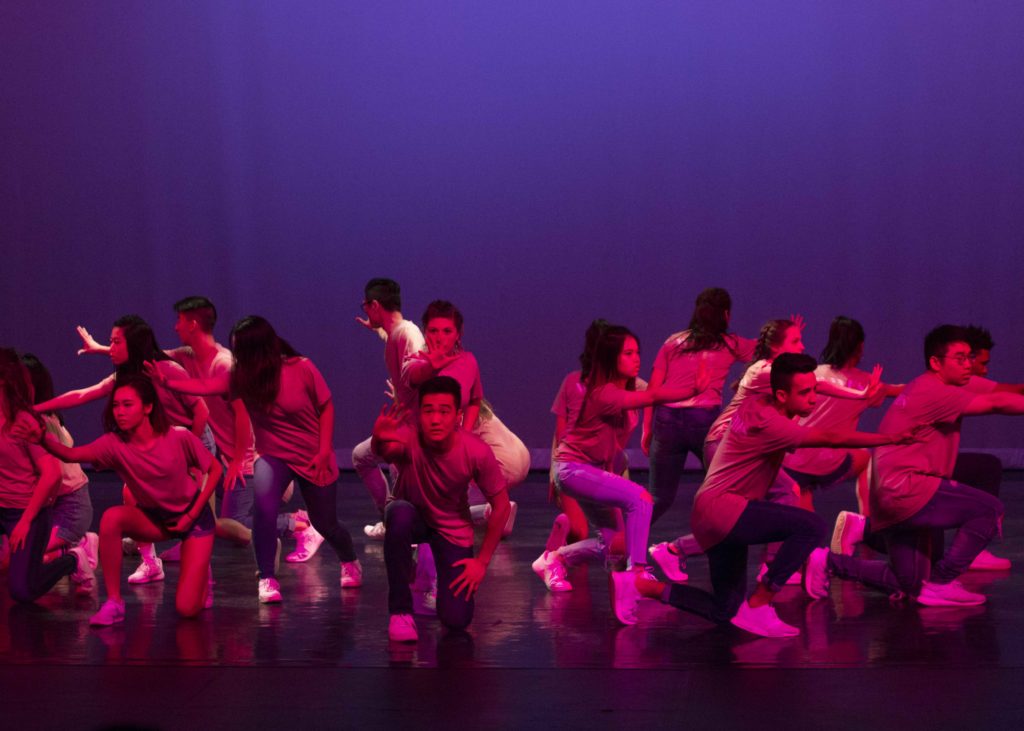 As the lights dimmed to begin the show at Robsham Theater, the crowd’s fervent cheering erupted to welcome UPrising’s hip hop showcase, “Waves.” The group choreographed and danced several detailed numbers to well-known hip-hop music, sharing its infectious energy with the spirited audience. The showcase also featured several Boston College dance groups, including Masti, AEROdynamiK, Fuego del Corazon, Dance Ensemble, and Synergy, as well as one Boston-based guest group, Queens with a Mission (QWAM). The vibrant collection of performances and dance styles provided an entertaining spectacle, and united the dancers and viewers in the spirit of hip hop.

“Waves” opened with a smooth, slow-tempo opening number. The dancers embodied the John Mayer-esque track, with crisp hand movements, highly stylized precision, and isolated body movements. UPrising has a remarkable unison between its dancers, and the cohesive dance allowed for a seamless transition between the medley of songs of the number. When a clear lyric stood out in a track, you could be sure one of the dancers would prominently lip-sync along, which let the dancers more completely channel the persona and attitude of the hip hop music. When Sam Smith’s “Too Good at Goodbyes” blasted onto the stage, the audience screamed in approval. Pairing emotive choreography with visually dynamic stage formations, UPrising set the bar high for the rest of the night.

The show switched off between its guest performers and UPrising numbers, which led to AEROdynamiK taking the stage. The number was packed with a confrontational, fun style and demonstrated pointed musical awareness through its choreography that seemed made for the songs. When Portugal the Man’s “Feel it Still” remix brought its poppy, upbeat sound to the stage, the group responded with effervescent movement. Complete with full-body leans and twists, the multitude of dancers utilized the whole stage, from moving on the floor to stretching toward the ceiling. Paramore’s “Hard Times,” provided a disco-pop, whimsical tinge to the number, and complemented AEROdynamiK’s expressive style.

Among the guest performances was Fuego del Corazon, which presented fiery Latin dancing and show-stopping lifts that contributed an intricate interpretation of the energy of hip hop dance. Masti appeared with its trademark Bollywood Fusion dance, its dancers all smiles as they carried out assisted backflips and bouncy movements to the likes of “Swalla.” Adding yet another shade of dance to the evening, Dance Ensemble filled the stage with sweeping, contemporary choreography. The group accentuated the soaring electronic music with a wave of dancers instantly dropping to the floor, which was a well-coordinated and visually appealing move.

The show also featured Queens with a Mission (QWAM), an all-male Boston dance group dedicated to expressing the spectrum of aspects of dance, which include reality, masculinity, and femininity. The crowd was a riot throughout the performance, loving the tribute to “Buttons” by the Pussycat Dolls wherein QWAM threw all their star power onto the stage and pulled off intricate choreography in high heels. In addition, Synergy took the stage with their signature hip hop attitude with a sultry number, complete with head tosses and dynamic choreography.

UPrising maintained its magnetic presence throughout the night, bringing flashy numbers to the stage, such as its Nicki Minaj medley. The dancers embodied Minaj’s cold, sleek, tough demeanor through each segment of the performance. The segments built on each other to develop the roaring energy required to carry out its graceful elements as well as its more staccato ones. The dance crew followed with a Rookie Set, performed by the new members of the group, and their execution was so well-presented that the audience wouldn’t have known these were new dancers.

UPrising’s Drake number began with “Hold On, We’re Going Home,” and opened with the silhouettes of the dancers, which allowed the audience to appreciate the whole of the dancers’ movements and their unity on the stage. Next, the dancers embodied the dramatic, aggressive style of Cardi B in “Bodak Yellow” by throwing their arms and performing extended sequences of frenetic hip hop moves. At one point, just four dancers remained on the stage in a line, and one at a time, they unleashed a brief solo. Their ability to maintain the audience’s interest with even one dancer at a time speaks to the group’s captivating style and adept skillset.

UPrising’s performances seemed to escalate as they transitioned into a Beyonce number. Opening with silhouettes and red lighting for “Formation” and paying tribute to the iconic song, the dancers were fierce and conveyed the larger-than-life persona of the pop culture queen. Finally, the show closed with UPrising’s Kendrick Lamar performance, which contrasted moments of stillness with explosive creativity. One segment for “Humble” showed small, isolated groups of dancers moving at a time, while everyone else stood in uniformity. The effect was a dance that attended to the song’s catchy lyrics, before transitioning into  lively closing sequence that had the audience singing along to the prolific track.