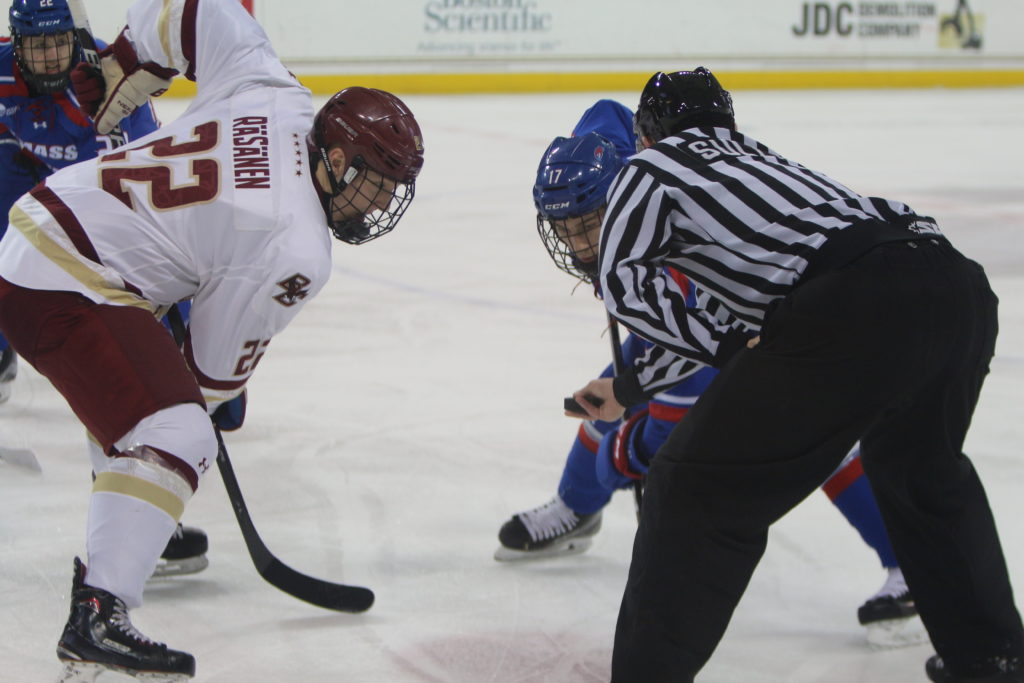 Boston College men’s hockey hadn’t beaten Massachusetts Lowell since 2016, but on Saturday night, they took advantage of an uncharacteristically sloppy River Hawks team to close out the weekend with a 5-2 victory. It wasn’t without a few hiccups, though, as an up-and-down season continued. After a scoreless 18 minutes to start the game, it seemed possible that it could follow in the footsteps of previous games. But that didn’t happen Saturday night, as the No. 16 Eagles (13-10-3, 13-5-0 Hockey East) rode a second-period offensive explosion to a convincing win.

BC avoided the penalty box in the early going, uncharacteristic of the young team. Lowell (15-12-0, 10-8-0), on the other hand, couldn’t stay under control, handing the Eagles a pair of power plays. David Cotton and Connor Moore scored over a four-minute span on the one-man advantages, making sure they didn’t squander the opportunity.

With every point the Eagles added on the board, Lowell’s defense crumbled a little more. BC has struggled with penalties this year, but the amount of time it spent with five men on the ice in the first two periods allowed head coach Jerry York’s team to take a convincing lead.

That being said, when Luke McInnis and Jacob Tortora sat for hooking and boarding, BC’s penalty kill faltered—leading to Lowell’s first goal of the game.

At times this season, the third period has been tough sledding for BC—that was certainly the case for the final 20 minutes against Lowell on Saturday night. Lowell pocketed two goals in the frame to avoid a shutout, making the game look a lot closer than it actually was. After five unanswered goals in the first two periods, BC wasn’t able to get the puck out of its own zone in the final period of play. The second frame showed the Eagles at their best, but the first and third revealed their weaknesses.

“We let it up a little bit in the third, but we took a deep breath, got back to our game, and I thought the outcome was what we wanted,” Moore told reporters after the game.

With a tough couple of weeks ahead of them, the Eagles can’t afford any more slow starts. The Beanpot looms, a symbol of the home stretch—games in which most teams are in tip-top shape. BC made up for a relatively quiet first period with a second-period explosion, but the first 15 minutes of sloppy passes and missed rebounds could have been costly. The Eagles were lucky that the Lowell offense—the fifth-best unit in Hockey East—stumbled out of the gate.

Despite taking 12 shots in the first period, BC only tallied one goal, even though it had multiple opportunities to light the lamp in the opening minutes. An early shot by Cotton presented BC with an empty net rebound opportunity, but there was no one there to connect with it. J.D. Dudek also had a chance when he skated down the line alone toward Lowell goaltender Tyler Wall, but he tripped on the ice at the last second, and the puck got away from him. It’s not that the Eagles lacked scoring chances, they just failed to capitalize on them. BC didn’t cash in until Cotton logged a power-play goal late in the period. Save for an outstanding second period, the rest of the game was more of the same—dicey puck control and, above all else, missed opportunities.

Regardless of the slow start and rough third period, Moore thought that, all in all, the Eagles’ performance was a sign of progress.

“Tonight we were really moving the puck,” Moore said. “Our power play has been improving throughout the year. I think we still have more stuff to do but I think it’s been going really well.”

The rest of the season could go one of two ways. If the Eagles play the way they did in the second period, BC could make a run deep into the postseason. The flip side, however, is if the team struggles like it did during the first and third periods, the Eagles could very well miss out on its second-straight NCAA Tournament.