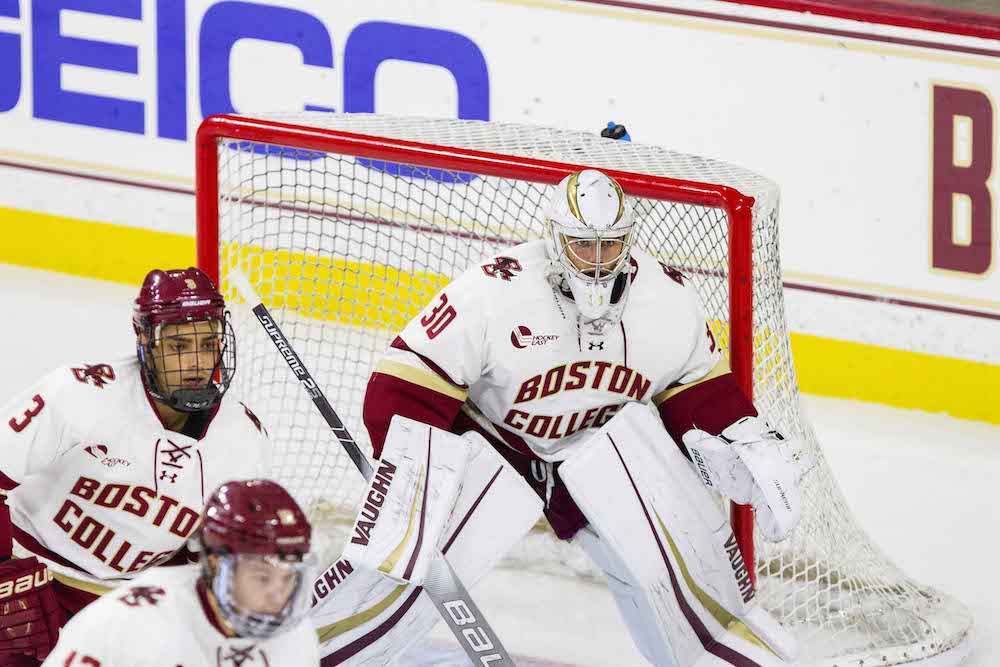 It didn’t matter in the end that Boston College men’s hockey committed seven penalties and was outshot by 15 on the road against Colgate. The reason? Freshman goaltender Spencer Knight, who turned away 39 shots in his first collegiate shutout, which was backed by more than enough goal support in a 3-0 win over the Raiders on Sunday afternoon in New York.

Just like in their win over No. 15 Wisconsin last Friday, the Eagles (2-0) faced a plethora of penalty kills against Colgate (0-3). And although nothing came of the seemingly insurmountable seven penalties called on the No. 6 Eagles, it’ll be necessary for the squad to keep themselves out of the box and on the ice going forward. Knight’s prolific effort kept the Raiders off the board—he stopped eight shots on the penalty kill—but 22 penalty minutes in two games has to be worrisome for head coach Jerry York.

The first penalty against BC came at the seven minute mark, when senior Ron Greco was called for interference. Despite the man advantage for the Raiders, playing 5-on-4, the two squads were tied for one shot apiece throughout the whole two-minute penalty. The same thing happened during the subsequent two Eagles penalties.

Despite Colgate taking only one penalty to BC’s three in the first period, it was the Eagles that struck first in the weekend matinee. Late in the first frame, senior defenseman Luke McInnis handed off the pass to captain David Cotton before receiving it back as the Eagles surged into the offensive zone. McInnis one-timed the puck past Colgate goaltender Mitch Benson, finding the back of the net for the first time this season and making his mark in his 100th career game.

Although the score read 1-0 in favor of BC, the two teams remained closely matched with the Eagles only outshooting Colgate, 12-10, in the first period—a statistic that would flip in the following frame. Yet it is not quantity but quality that matters in such contests. In the 40 minutes that followed, the Raiders outshot the Eagles, 29-14—but Knight remained unfazed by the onslaught of the Colgate offense.

The Raiders came out hot in the second period with a flurry of shots against Knight. But with a total of 21 shots came 21 saves by the rookie goaltender. The reinvigorated Colgate team, though, was still unable to fully contain the Eagles. Less than 20 seconds after the period started, Cotton snatched the puck from Colgate defenders, passing it to fellow senior Julius Mattila, who raced into the offensive zone virtually uncontested. With a cross-ice pass from Mattila to junior Logan Hutsko, the Eagles got on the board once more, building their lead to 2-0.

In the third frame, it was BC’s special teams that made the difference. With three more penalties called on the visiting team, it was essential to remain pristine and keep the puck out of their own net. And yet, the Raiders were unable to capitalize on any of their three power plays, including a 5-on-3 that resulted from back-to-back penalties called on McInnis and Graham McPhee.

While the Raiders had numerous chances to minimize their deficit, they were unable to create second-chance shots. Instead, the puck frequently went back out into neutral ice, giving the Eagles a chance to flip the rink quickly.

Then, late in the third, the tide turned again, with four penalties called against the Raiders, including double-major penalties and game misconduct calls. It was during one of those penalties—a cross-checking call on Raiders captain Bobby McMann—that Cotton sealed Colgate’s fate with a power play goal that found its way past Benson and into the back of the net.

The two major rulings, called on McMann and freshman Liam Watson-Brawn, resulted in the Eagles finishing the game with a five-minute power play, the last three minutes of which yielded a 5-on-3 advantage for York and Co. While BC was unable to capitalize, it maintained its 3-0 lead, giving Knight his first career shutout with the Eagles.

With their win over Colgate, the Eagles are off to their best start to a season since the 2011-12 campaign, a year that ended in the program’s fifth national championship. The path doesn’t get easier with two road games against No. 2 Denver, which remains undefeated thus far through four games. The Pioneers are averaging 10.5 penalty minutes per game, though, so these two meetings could quickly become a battle of special teams units.

Olivia Charbonneau is the associate sports editor for The Heights. She is unfortunately bad at game pigeon games, cannot pick a favorite hockey team to save her life, and maintains the position that coffee just tastes like dirt water. You can follow her dog on instagram @sebsgoldenlife and her on twitter @oliviacharb.