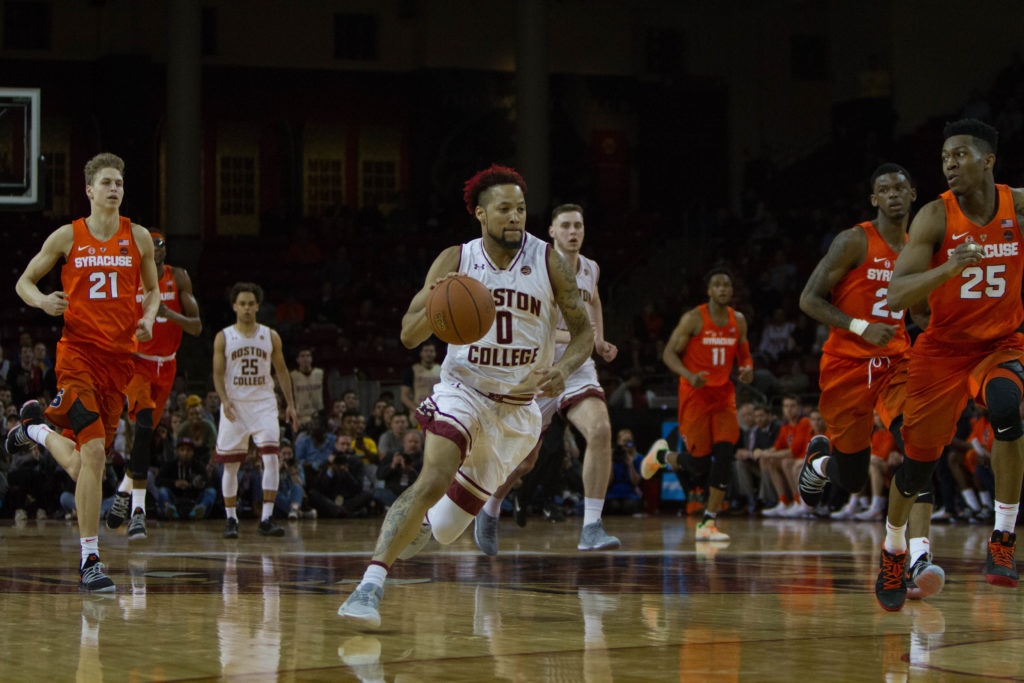 On Wednesday night, Boston College men’s basketball put together one of its best performances of the season, knocking off Syracuse, 85-70, leading for all but two minutes of regulation. As usual, the Eagles were headed by the dynamic backcourt duo of Jerome Robinson and Ky Bowman, who combined for 45 points as Jordan Chatman snapped out of his funk, managing to hit five triples and add 18 points of his own. Here are a few notes from BC’s first win in two weeks.

Syracuse is known for its 2-3 zone and this year’s iteration is long and athletic. In the teams’ first matchup in the Carrier Dome, the Eagles struggled with head coach Jim Boeheim’s acclaimed scheme, turning the ball over 17 times and looking lost offensively for much of the game. Wednesday was an entirely different story.

It’s well known that there are two good ways to attack a 2-3 zone: get a man to the free throw line, or run up and down the court in transition. Of course, this is easier said than done, but the Eagles managed to do both in their home finale. In the first matchup against Syracuse, it was usually Robinson, who flashed in the middle of the court. For a significant portion of Wednesday’s game, it was more of the same—the junior made his way to the high post area and either pulled up from mid-range or attacked the hoop. But head coach Jim Christian and the Eagles also sent Nik Popovic, Steffon Mitchell, Chatman, and even Bowman to ACC logo at times, mixing up personnel groupings and keeping the Orange on its toes. For the most part, BC did an excellent job getting the ball in the middle and making the right decisions once it penetrated the zone.

The Eagles also exposed Syracuse on the run. After misses, there was a noticeable effort from both Bowman and Robinson to push the ball quickly in an attempt to get an easy shot opportunity before Syracuse could get set. Even Popovic managed one of the plays of the game when he threw a behind-the-back pass to Bowman on a 2-on-1 fastbreak. It didn’t hurt that BC forced 15 Orange turnovers, essentially piling up 19 free points, many of which were uncontested layups on the break. All in all, BC was significantly more efficient on the offensive end than it was in the Carrier Dome five weeks ago.

Preventable Turnovers
Despite the efficiency the Eagles displayed, there was one blemish that marred an otherwise fantastic performance: turnovers. The Eagles as a team have been guilty of too many unforced mistakes this season. For an example, look no further than the game against Miami where BC panicked and collapsed down the stretch. As a whole, BC was certainly better Wednesday night, giving the ball away just 10 times. Still, many of the Eagles’ turnovers against Syracuse were head scratchers. On one possession, Popovic picked up his dribble, and, with all the time and the world to make a decision, threw an errant cross court pass intended for Bowman that led to a Syracuse fast break. On another crucial possession late in the second half, Robinson committed a 10-second violation where he looked indecisive in the backcourt, despite having multiple opportunities to push the ball across the midcourt stripe. It seems somewhat harsh to nitpick an impressive win for BC, but the preventable turnovers the Eagles committed Wednesday will have to be addressed by Christian.

As the Eagles stretched their lead to 15 with just under eight minutes left, an eerie feeling of deja vu crept into the building. Just four days prior, BC had led by 14 in Miami with just over six minutes left, only to watch its lead disappear rapidly and eventually lose the game, 79-78. And when Syracuse turned up the full-court pressure, forcing a 10-second violation with just over four minutes left and BC clinging to an 11-point lead, it was hard not to think that the Eagles were headed for another late collapse. This time, however, they remained calm, didn’t turn the ball over the rest of the way, and most importantly, hit their free throws. Luka Kraljevic, who was closing the game because of a hamstring injury to Steffon Mitchell, hit both of his attempts after missing a crucial free throw against Miami. Chatman hit 2-of-2, and Popovic, who also missed two attempts late in Coral Gables, Fla., made 3-of-4 to keep the Orange from mounting a late comeback.

BC has struggled noticeably on the defensive end this year, allowing opponents to shoot 43.8 percent from the floor, the fourth-worst mark in the ACC. Yet on Wednesday the Eagles managed to turn in one of their best defensive performances of the season. They held Syracuse to just 38 percent shooting and, most importantly, held the Orange to 10-of-24 from deep. Quite simply, all five players on the floor upped the ante on that side of the court. Bowman, Robinson, and Chatman were active fighting through screens and staying in front of their men, Mitchell brought his usual active presence before being forced out with a hamstring contusion, and even Kraljevic, who has struggled to stay out of foul trouble this season, did a fantastic job down low in his 14 minutes of action. On one particularly impressive possession with just under four minutes to go in the game, a good closeout by Robinson forced a tough Orange fadeaway jumper. A bad bounce gave Syracuse an offensive rebound, but three BC defenders swarmed the ball down low, forcing a turnover. The sequence was emblematic of an Eagles team that was locked in on the defensive end all night long.

Inability to Stop Syracuse’s Premier Scorers
As well as BC played on defense, it still allowed Tyus Battle, Syracuse’s most consistent offensive threat, to score 29 points. This is just the latest example of what has been one of BC’s myriad problems guarding teams this season: Once a player gets going against them, the Eagles have had a hard time keeping the damage to a minimum. Just a few weeks ago, Matt Farrell drilled 10 of his 12 triples against the Eagles on his way to 37 points. Even before that, North Carolina’s Luke Maye lit the Eagles up to the tune of 32 points in Chapel Hill, and, at times, lesser players like North Carolina State’s Braxton Beverley have looked unguardable against the Eagles. Part of this can be attributed to the fact that BC doesn’t have a shut-down perimeter defender on the roster. Bowman is often guilty of biting on too many shot fakes, while Chatman and Robinson have had trouble staying in front of their assignments throughout the year. All it takes is for on opposing player to get hot to make a game out of BC, as evidenced by Syracuse’s 10-0 near the end of the first half on Wednesday night.

Steffon Mitchell is quickly becoming a fan favorite on the Heights, and he turned in another excellent performance for the Eagles on Wednesday. He started off the night with a steal and a vicious dunk over a Syracuse defender, dished out four assists, grabbed four rebounds, one of which he turned into a putback dunk, and recorded yet another block to raise his total for the season to 32. He did miss several open jumpers in the high post—shots he will certainly need to hit in future years if he is to take his game to the next level—but if he fixes his shooting woes the Eagles will have quite the player the next three years.

Kraljevic has drawn his fair share of criticism from BC fans this season, and he has struggled with foul trouble and looked panicked on offense at times this season. Wednesday night, however, he showed his value as a defender, switching out onto Tyus Battle and Frank Howard, Syracuse’s primary offensive threats, and holding his own on the perimeter, all while battling Pascal Chukwu—the Orange’s tallest player—in the paint. If Kraljevic can cut down on his aforementioned fouling issues, he and Mitchell will provide BC with an excellent and athletic frontcourt in coming seasons.