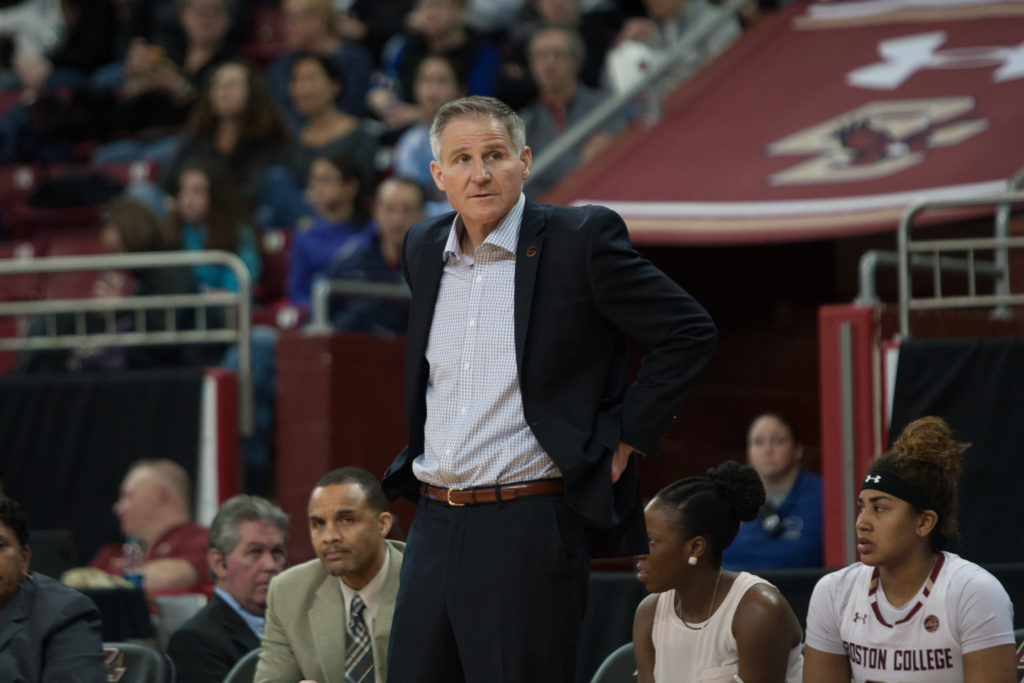 Boston College Director of Athletics Martin Jarmond announced the resignation of head women’s basketball coach Erik Johnson on Thursday afternoon, bringing an end to his six-year tenure on the Heights.

The news comes approximately 24 hours after the Eagles lost to North Carolina, 69-64, in the first round of the ACC Tournament, failing to advance in the annual conference competition for the fourth time in the past five years. During the postgame press conference, it almost appeared as if Johnson already knew that he was handing off the baton to the next coach in line.

“This is a team that, to put in context, had four seniors that maybe weren’t our leading scorers and the star players,” Johnson said, per BCEagles.com. “But they created a culture that is going to continue Boston College women’s basketball into the future.”

He leaves the program in good hands. Five of BC’s top-six scorers are underclassmen, including each of the top three, most notably Taylor Ortlepp—the sophomore point guard who capped off the season recording 23 or more points in three of her four final games.

Winning, on the other hand, has been a different story. Over the course of his BC career, Johnson posted a 68-115 record, going just 19-77 in ACC play. Not once did the Eagles finish above .500 during his time at the helm. His best season came in 2015-16, when BC won 15 games—five in the ACC—upset No. 4 Duke, and made it to the second round of the conference tournament. After that, everything went downhill. In the past two years, the Eagles have compiled a 16-44 record, not to mention 4-28 mark in ACC play.

That said, win or lose, Johnson was undeniably optimistic and had an admirable aura throughout his time with the program.

“Erik has put his heart and soul into leading our women’s basketball program, and we appreciate his years of service,” Jarmond told BCEagles.com. “We wish him and his family the best in all of their future endeavors.”

Jarmond’s search for a new head coach will begin immediately. For the moment, associate head coach Yvonne Hawkins will serve as the interim.

erik johnson women's basketball taylor ortlepp martin jarmond yvonne hawkins
Nell Tells All: After 100 Years, Are We Modern Yet?
Minors in Finance, Accounting, and Marketing to Be Offered to All Undergrads