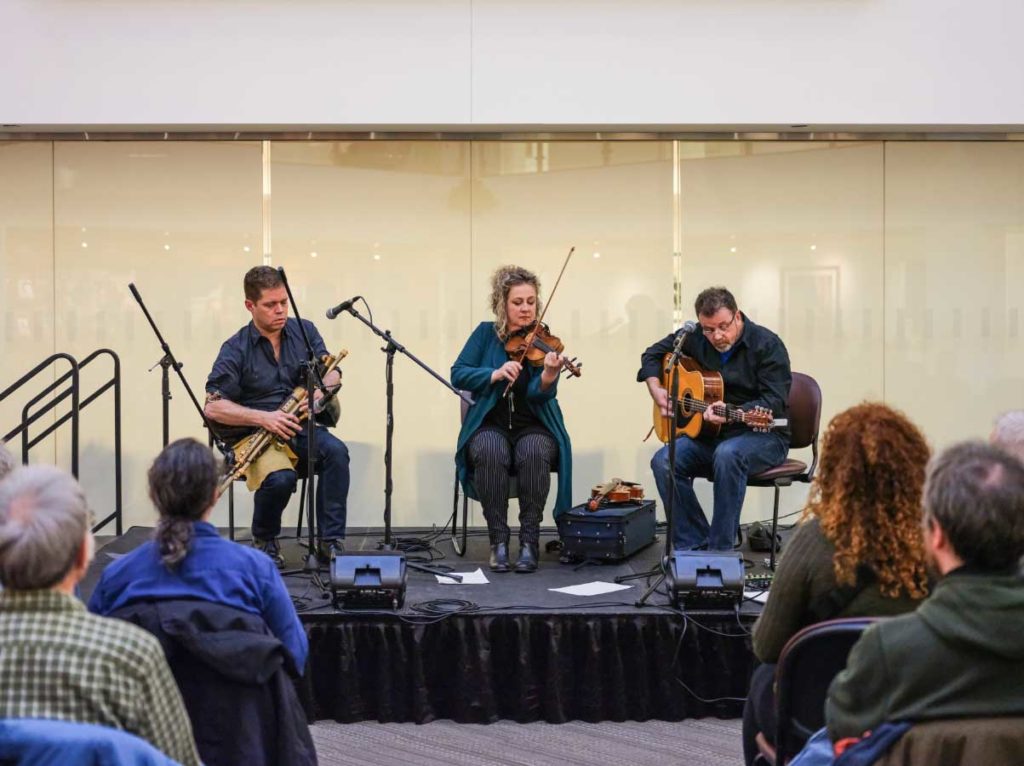 Less than a week after Boston’s favorite holiday, the Gaelic Roots Series hosted Open the Door for Three for people who didn’t get their fill of Irish jigs and merry music on St. Patrick’s Day. Held in the Cadigan Alumni Center on Boston College’s Brighton Campus on Thursday, the concert featured lively beats and old Irish tunes from the trio based in Portland, Maine.

The group performs traditional Irish music that was written centuries ago, as well as tunes that band members Liz Knowles, Kieran O’Hare, and Pat Broaders composed themselves. They perform songs inspired by their own childhood favorites alongside those that they believe have not been played in over 200 years.

Broaders, the guitarist and vocalist for the trio, introduced them and spoke about the first three songs they would be playing that evening. His brogue set the tone for the theme of the evening as he introduced “Boiling Water,” “Let Us Leave That As It Is,” and “Happy to Part.” The beginning of the evening picked up with the fiddle, and O’Hare switched from playing the whistle to the uilleann pipes, the national bagpipe of Ireland.

As O’Hare played the whistle, he shut his eyes and felt the music. He wasn’t the only one getting into the tunes—people in the audience tapped their feet to the music, and one gentleman wearing a green shirt in the second row clapped his hands on his legs along to the rhythm. Throughout the show, people let out sighs after a long fiddle solo or whistle part, and could be seen smiling and moving to the music.

After the opening number, Broaders spoke about the next piece they would be performing. While reading through a book in Ireland, he came across a piece that he thought seemed familiar. After further research, he realized that it was something his father used to play when Broaders was a child. He continued on to sing “Carrig River,” a song that has a melancholy sound, appropriate for its lyrics about the deaths of people during the Irish rebellion.

The group played “The Joyful Hour” next, the song inspiring the title of its most recent album. The whistle had a prominent part in this piece, whose tone was as cheerful as the name might suggest. O’Hare switched from the whistle to the uilleann pipes about halfway through, offering a unique sound that may be unfamiliar to those that do not often listen to Irish music. Throughout this song, O’Hare and Knowles, the fiddle and hardanger player, would look up and smile at one another, especially after one completed what appeared to be a challenging section of the song.

They continued on to play a double jig that they said would feel instantly familiar for anyone who has listened to Irish music before. The song that followed, “Church Hill,” had a sort of nostalgic sound as the uilleann pipes opened it up before it shifted into “The Monaghan Jig”—a piece that Open the Door for Three arranged to fit its own tastes, cherry-picking variations and changes that it heard performed by other groups. The fiddle part picked up, going so fast that when the song finally ended, Knowles said “that’s over with,” drawing laughter from the crowd.

Knowles then introduced the next song they would be playing, one that she said she makes sure to always explain before they play. “The Golden Glove,” also known as “Her Dog and Her Gun,” tells the tale of a young woman in Ireland who is engaged to a squire, but is in love with a local farmer. Knowles said that she loves this song because, unlike in other Irish tunes, the woman is actually happy in the end.

The tragedy in traditional music could be seen in “Miles Weatherhill”—after Miles is caught with his girlfriend, she’s sent home to live with family, prompting Miles to go on a killing rampage, eventually murdering everyone in the town.

Playful comments such as this were common throughout the evening, and they were always met by the approval of the audience. The listeners were an older crowd, and many were familiar with each other from attending Irish events in the community together. When the group concluded its final number, people rose to their feet in approval of the last two hours of music, until the group returned to play one extra song.

When it was truly done and had to leave the stage, the group stayed around to chat with the guests and sell its latest album, The Joyful Hour. After they browsed the display of CDs on the front table, people talked about the talent displayed that evening as they pulled on their coats and wished each other well until the next Gaelic Roots performance. 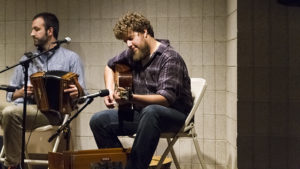