Twenty-seven features in, and we still don’t know what to expect from Steven Soderbergh. After bursting onto the indie film scene in 1989 with his breakout Palme d’Or-winner Sex, Lies, and Videotape, the acclaimed director has been making films that run the gamut, churning out well-crafted crowd-pleasers like Ocean’s Eleven, enigmatic experimental works like Schizopolis, and other films that occupy the elusive space in between accessibility and obscurity. His chameleonic persona and penchant for pushing filmic boundaries should be lauded, even if the fruits of his experimentation aren’t entirely successful—hence, the price of ambition. Following up his 2017 racecar romp, Logan Lucky, comes Unsane, Soderbergh’s mental-asylum thriller shot entirely on an iPhone 7 Plus. This strange melding of genre schlock and formal experimentation stands somewhere near the fulcrum of the director’s filmography—it’s being marketed heavily as an edge-of-your-seat thriller, but these straightforward genre elements represent some of the least interesting aspects of Unsane.

Sawyer Valentini (Claire Foy) is new in town. Our 20-something-year-old young professional protagonist has just made the move to a new city to avoid a stalker (Joshua Leonard), and life doesn’t seem any easier. Sawyer spends her days working in a bland office space and her nights knocking back drinks at the local watering hole. Any sense of enjoyment is upended by chronic nervous breakdowns prompted by memories of her stalker, and Sawyer soon seeks out help at a local hospital. In a Kafkaesque sequence, Sawyer is swept away in a frenzy of hospital bureaucracy and unwillingly committed to a week at a mental institution. She makes a friend in Nate (Jay Pharoah), one of the inmates, but Sawyer struggles to come to terms with her new home for the time being. The dimly lit labyrinth of hospital corridors house a grotesque cast of employees and inmates that perpetuate the unease and fear felt by our protagonist. Of course, things get worse when she realizes her stalker has taken a job at this very hospital (gasp!).

iPhones play a prominent role here, not just in the filming but also in the action of the story. Sawyer calls her mother over Facetime, she uses Tinder to meet guys at the bar, and she eventually uses Nate’s smuggled iPhone to illicitly communicate to the outside world from the hospital. In a flashback, we even realize that her stalker harassed her over iMessage. Anxiety surrounding surveillance and technology is not a new idea, but the grimy, lo-fi aesthetic of the iPhone footage helps create a paranoid mood. The camera observes Sawyer with a voyeuristic gaze, shooting her from behind bushes and trees, and this technique works well at the beginning of the film, but Soderbergh abandons it once our protagonist arrives at the hospital. Sweeping dolly shots down hospital hallways and harsh angle close-ups soon replace these voyeuristic techniques, as the iPhone cinematography seems to become less and less meaningful. The direction throughout is undeniably propulsive, but it adds little to the narrative as it goes on (even as it showcases the potential of low-budget filmmaking).

The film’s formal qualities are interesting to consider, but the question remains whether Unsane works as a thriller. The first half works fairly well by placing us in Sawyer’s subjective headspace, which allows us to question the protagonist’s sanity. Foy’s manic performance helps sell the character’s sheer desperation as she is flung into an environment that seems to defy any sort of logical cohesion. Around the midpoint, however, the film strays away from its subjective bias and begins to include scenes that take place between characters other than Sawyer. Without spoiling anything, this transition away from subjectivity reveals the film’s hand and essentially abandons any sort of ambiguity the film worked hard to create.

With much of the ambiguity removed, the film effectively morphs into a sillier, schlockier kind of thriller that also hopes to communicate some sort of message regarding gender politics and abuse of power that feel prescient. Unsane comes to the conclusion that reality is often scarier than fantasy, yet the film’s subtext is often undercut by narrative conventionality. Still, Soderbergh deserves credit for delivering visceral and effective violence when the narrative calls for it. So, while the film doesn’t entirely coalesce in a meaningful way, there are certainly aspects of Unsane that make it worth a watch. 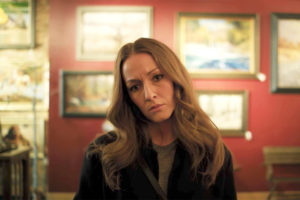