Home » Saba Grapples With Loss and Disillusionment on ‘Care For Me’
Arts, Music, Review

Saba Grapples With Loss and Disillusionment on ‘Care For Me’

You might know Chicago-based rapper Saba from his cut on Chance The Rapper’s “Angels” back in 2016. Often overlooked in the shadow of Chance’s success, fellow Chicagoan Saba has had difficulty breaking through to a larger demographic but has still managed to build and develop a steady core fan base in a hip-hop world of “here today, gone tomorrow”s.

Whereas Saba’s debut album, Bucket List Project (2016), showed flashes of brilliance with adept storytelling, wordplay, and production, it was a little choppy in its cohesion and delivery. But with the release of his sophomore album, Care For Me, listeners can see an artist coming into his own—creatively, sonically, lyrically—dealing with tragic loss and disillusionment with remarkable patience and poise.

In many ways, Care For Me is Saba’s response to the fatal stabbing of his cousin and fellow Pivot Gang rapper John Walt (real name Walter Long Jr.). The album works through the raw emotions that such a tragedy unleashes—sadness, anger, fear, confusion—deliberately and productively. It addresses different systematic and societal issues like police brutality, inner-city violence, and the effects of the social media age, for example, as well as personal issues in the present and the past.

The 10-track project opens up with “Busy / Sirens,” the first part of which is the album’s lead single. Saba announced its release back in February after deleting all of his previous Instagram posts and posting a new photo of him (dreadlocks cut) with the captain: “I AM VERY BUSY, I WILL HIT YOU BACK LATER.” Over a smooth, R&B influenced beat, Saba delivers deeply personal and honest verses with his typical mastery of vocal inflection and timing. His voice conveys weariness and anger simultaneously when he admits, “Jesus got killed for our sins, Walter got killed for a coat / I’m tryna’ cope, but it’s a part of me gone.” The two-part track transitions into a tremendously powerful insight into police brutality and African American identity, reminiscent of Chance the Rapper’s “Pusha Man / Paranoia” from Acid Rap, revealing Saba’s influences.

The second single from the album, “Life,” is the strongest cut on this project. With unreal production from Saba himself and fellow Pivot Gang members DaedaePIVOT and Daoud, “Life” sounds like A Tribe Called Quest redux with 808s (in the best way possible), featuring lyrics about life and the inevitability and impact of death. Saba continues to detail hardships he faced after the death of his cousin on this one with plenty of catharsis.

Another standout is “Logout,” which features a guest verse by Chance the Rapper. Another example of the outstanding production on this album, “Logout” addresses the effects of social media on our generation. Saba muses on the hook, “If you press logout you get forgotten, what’s a post but a reminder just how boring our lives are?” stuttering on the last word to reflect the latency of the digital age. Chance provides a verse, in his classic simple yet utterly poignant approach, about the authenticity (or lack thereof) in a society in which “everything’s on camera.”

A huge plus on this album is Saba’s creative ability for songwriting around a concept. The content of the different songs sets them apart from each other while maintaining the commonalities that hold the project together. On “Broken Girls,” Saba muses on his relationships with women. “Calligraphy” details his use of writing to cope with reality, and “Smile” addresses the idea of money buying happiness. “Grey” reveals his troubles with being an artist and the lack of sincerity in the music industry. Saba’s lyrics provide refreshment from a lot of the homogenous hip-hop we see today that often quickly burns and dies out. In an industry of replicability, Saba provides substance.

Another example of that substance is his incredible storytelling, particularly on “Prom / King”. Saba details his experience of high school prom with his late cousin Walter on the first part and transitions into a shockingly honest account of the moments leading up to his cousin’s death. His ability to craft a narrative through impressively delivered verse is very reminiscent of early Kendrick Lamar, specifically his own sophomore album good kid, m.A.A.d city from 2012.

Care For Me comes off as a lot more pessimistic than Saba’s debut Bucket List Project, but  deservedly so. As Saba grapples with the important problems of his own and of the world around him, it becomes apparent on this album that there probably isn’t really an answer to the riddles weaved into our lives. But that doesn’t mean we shouldn’t try or, as the title suggests, care.

chance the rapper saba care for me
“Okra,” “Driving,” and More in New Singles This Week
Given Turns Boston Marathon into Family Occassion 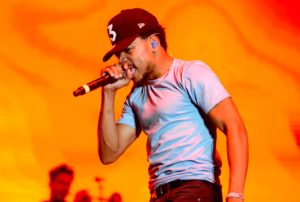