Home » Seminoles Complete Sweep of BC With Third Decisive Win 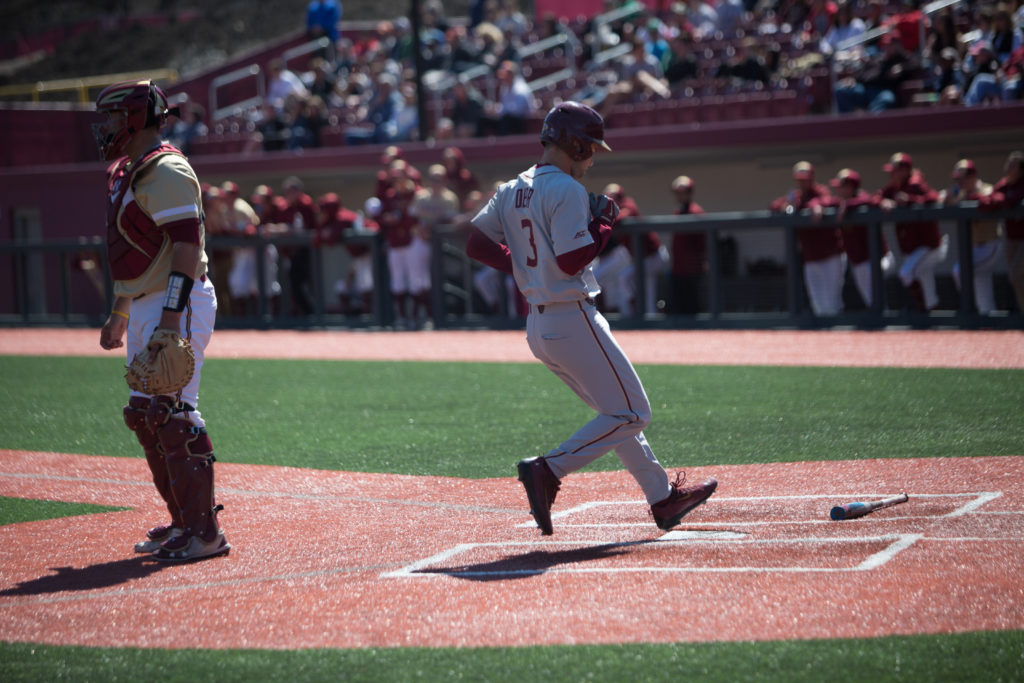 Seminoles Complete Sweep of BC With Third Decisive Win

Brian Rapp came set, ready to deliver a pivotal fifth-inning pitch to Florida State’s Nick Derr with a pair of Seminole runners lurking in scoring position, aiming to preserve a 1-1 tie for Boston College baseball. The Eagles were seeking to prevent a sweep after having seen a furious comeback fall heartbreakingly short in 11 innings on Friday and blowing an early lead, en route to a six-run defeat in Saturday’s Seventh Annual ALS Awareness Game at Fenway Park.

As Rapp began his windup, an impressive crowd anxiously awaited the result of the pitch. Instead, they heard “that’s a balk!” exclaimed by second-base umpire A.J. Lostaglio. Fans and players alike were shocked as the go-ahead, eventual game-winning run crossed the plate on the illegal deception call. Head coach Mike Gambino trotted out to talk to Lostaglio, but later acknowledged that it was the right call.

“I agreed with the fact that it was a balk,” Gambino said after the game. “I thought it was an awkward time to call a balk. He had said something [to Brian] a couple pitches before … so I think the call was right.”

The balk was the first in a chain of miscues that spelled disaster for the Eagles, as FSU completed the sweep with a 6-1 win, despite managing just five hits.

Although he was the Sunday starter, Rapp sported the lowest earned-run average of the Eagles’ (13-26, 5-16 Atlantic Coast) rotation coming into this game, and he was impressive early. The senior retired the first nine FSU (29-12, 11-9) batters on just 21 pitches, striking out three. Rapp was effectively working the corners with his fastball, especially up in the zone, with FSU hitters harmlessly popping the ball up.

The Seminoles’ Andrew Karp matched Rapp early on, though. Jake Palomaki led off with a bloop hit that turned into a double, thanks to a high turf bounce. Soon after, Chris Galland walked, but Karp quickly settled in, retiring the next seven. FSU made six errors on Friday, and three more on Saturday, but the Seminoles’ Reese Albert flashed the leather in the second, laying out in deep right center to take away an extra-base hit from Jake Alu.

The Eagles broke through in the third, plating a run after three-consecutive singles from Palomaki, Galland, and Brian Dempsey. Karp limited the damage with a subsequent strikeout and weak groundout. Despite taking the lead, the Eagles were left grappling with missed opportunities as they left four runners in scoring position in the first three innings.

It was the same story in the fourth, as the Eagles used a walk and two singles to load the bases, but once again, Karp pitched out of trouble. The junior, who multiple scouts had their radar guns on all afternoon, was making big pitches in big spots, but not without cost—he nearly surpassed 70 pitches through four innings.

Rapp surrendered his first hit in the fourth, and a leadoff walk, followed by a single in the fifth, proved to spell disaster for the Eagles. The Seminoles notched just two hits in the frame, but scored four on the strength of three walks, the balk, and 34 pitches from Rapp—just five shy of his combined total of the previous four innings. After stealing the spotlight with his glove early on, Albert came through with an RBI single.

The balk appeared to play into Rapp’s psyche for the rest of the inning. He walked two of the next three batters, and a risk-or-reward throw to the plate on a Mike Salvatore safety squeeze went against the Eagles, as Albert crossed the plate when Rapp fired home. Catcher Jake Goodreau, trying to catch and tag in the same motion, could not corral the throw, as the ball trickled behind home plate.

Meanwhile, Karp was hitting his stride in the middle innings. After stranding six Eagles in scoring position in the first four frames, BC could not get a runner to second in the fifth and sixth. Dempsey tried, but was caught stealing for the fifth time in eight attempts this season. Karp exited in line for the win after six innings of one-run ball, scattering six hits and three walks alongside seven strikeouts.

Rapp rebounded in the sixth, despite struggling to locate his fastball. He relied more on his slider to post a scoreless frame. With 95 pitches, Gambino sent Rapp out to start the seventh, presumably due to an exhausted bullpen that received just eight combined innings out of starters Jacob Stevens and Dan Metzdorf the previous two days. Rapp was chased after surrendering a leadoff double to Derr, who came around to score after a passed ball and a sacrifice fly to push FSU’s lead to four.

The Eagles threatened in the bottom of the seventh, drawing three-consecutive full counts and a 32-pitch effort from Seminoles reliever Jonah Scolaro, but had nothing to show for it. BC stranded its ninth and 10th runners on second and third as Scolaro fanned late entrant Mitch Bigras and Goodreau to get out of trouble. Scolaro stayed on for the eighth where he struck out a demoralized Eagles lineup in order.

Derr tacked on an insurance run in the ninth, doubling off the left field wall to plate Albert for his second run of the afternoon. Thomas Lane worked two and a third strong relief innings before departing for lefty Zach Stromberg, who retired the two batters he faced.

Scolaro recorded the save by completing his third inning of work in the ninth, retiring eight of the final 10 batters he faced—a more than impressive outing from the freshman southpaw. With the sweep, the Eagles remain last in the ACC Atlantic Division and will have to quickly turn it around in their final three conference series to earn a bid in the conference tournament.

“We had a chance to win three baseball games,” Gambino said. “We all know we gotta clean some things up. We’ll just keep working and keep getting better, and that’s our focus.”