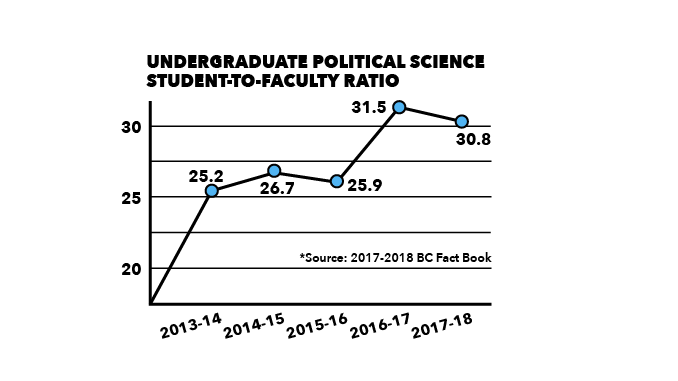 This story is the first in a series about hiring and retaining faculty at Boston College.

Political science majors are once again able to take selected courses through the International Studies Program that will serve as credit toward their major requirements next semester. This policy was also enacted last semester because many of the non-introductory political science courses were already filled after upperclassmen finished registering.

Nine hundred twenty-four students are currently majoring in political science, according to Kenji Hayao, the director of undergraduate studies for the department. The major has grown by 280 students since 2013, and the number of political science majors has increased 56 students per year on average. Meanwhile, the faculty size for the department has remained relatively unchanged over this period of time, hovering between 26 and 29 professors.

“We certainly think it is a problem, but not a problem that is insuperable,” said Susan Shell, chair of the political science department. “We are trying to deal with it as best we can.”

The department has attempted to resolve the problem by hiring more faculty members. But given that it aims to hire the highest-quality faculty and that talent acquisition is a departmental effort, the process is often quite time-consuming.

“Even though we want to have more faculty members, and certainly we’ve asked for more, it’s not like we could hire five people right away,” Hayao said. “We just would not be able to do it.”

Susan Shell, chair of the political science department, explained that the department is currently looking for one faculty replacement and hopes to begin searching for two additional replacements in the near future. The department does not, however, have a concrete idea of how many faculty members it should hire to meet the current student demand.

“Political science has been a popular major … and we are planning a careful expansion,” Shell said. “I am confident the administration will cooperate with us, given all the other demands on University resources to make that possible.”

“Political science has long been one of our most popular majors, and the quality of the faculty members within the department has been a major reason why,” Dean of the Morrissey College of Arts and Sciences Rev. Greg Kalscheur, S.J. said in an email. “We remain committed to working with Political Science, and all of the departments in the Morrissey College, to manage course offerings in a way that will ensure that all students can best fulfill their major requirements.”

One possible solution to address the problem would be to increase class sizes, but this would contradict the department’s vision for the undergraduate political science experience. Shell said that the department is committed to offering moderately sized courses taught by full-time faculty to devote more attention to students. But to meet this promise, the department must cap courses at a certain number of students—Shell noted, however, that faculty tend to be flexible in giving students overrides on an individual basis when warranted.

Another solution would be to introduce a selective application process to becoming a political science major, thereby restricting the number of students who are allowed to take the courses. But the department is unlikely to follow this course, as Shell and Hayao hinted that this track would be a “last resort.”

“In general, I’m not aware of students who aren’t ultimately able to satisfy the requirements of the major, even if there may be some inconveniences in getting the courses that they want,” Shell said. “I don’t mean to deny that there’s a problem with it, we need more faculty resources.”

Hayao suggested that the challenges that the department is facing in meeting student demand may also be due to a wider generational turnover with faculty at universities across the country. Shell also speculated that BC will add more faculty members not just in political science, but in other major departments across the University.

“This is going to be a problem, because this generation [of faculty] will start to retire in the next five to 10 years, not just in political science but across campus,” Hayao said. “There’s going to be a turnover in faculty members, and people in the University understand that it is coming up.”