For the third year in a row, Boston College softball enters the ACC Tournament as the No. 4 seed. And, for the second time in the last four years, the Eagles will take on Notre Dame in the quarterfinals, looking to bring a prolonged history of early exits to a halt.

BC (30-22, 13-10 Atlantic Coast) has lost in the conference quarterfinals for nine-straight seasons, faltering in a variety of ways—an upset at the hands of the Irish (31-20, 13-10) a season ago, shutout losses in three of the four years prior, and painfully narrow losses to the eventual champions. The Eagles are just 2-14 in the tournament historically, but boast one of their strongest teams in recent memory, placing five players on the All-ACC teams—the most since they joined the conference.

The game will be available on WatchESPN, broadcasted by ACC Network Extra.

1) Annie Murphy had already been named to the All-ACC Second Team twice in her career, but followed up the selections with an incredible senior season—she started all 52 games and hit .367 with 30 RBIs en route to First Team honors. She tore through conference opponents, leading all hitters with a .440 batting average in ACC play.

3) Jessica Dreswick has impressed in the circle since a shaky outing against Notre Dame, but Allyson Frei’s late-season slide could be cause for concern. The redshirt junior has seen her ERA climb by 61 points since that series, having given up four or more earned runs in three of her last five outings.

1) Alexis Holloway may only be in her first year, but she’s established herself as more than a worthy adversary for the Eagles vaunted duo. Holloway finished ninth in the conference with a 2.29 ERA, sixth with 155 strikeouts, and fifth in innings pitched at 178 and two-thirds.

2) The hitter to watch in the lineup is also a freshman—Abby Sweet. The center fielder hits out of the leadoff spot to the tune of a .350 batting average, reaches base at a .440 clip, and additionally is a near-perfect 14-for-16 on stolen base attempts.

3) Irish head coach Deanna Gumpf preaches a contact-first approach, as evidenced by her team ranking last in the conference in both strikeouts and walks, consistently putting the ball in play—even with limited walks, it is third in on-base percentage.

The teams met for a three-game weekend series starting on April 20, and BC secured the four-seed via the tiebreaker by taking two of three from Notre Dame. The Irish won the Friday night opener, 8-4, but the Eagles responded with wins on each of the weekend days. BC was guided by three hits apiece from Annie Murphy and Lexi DiEmmanuele in a narrow 6-4 win on Saturday, then wrapped up the weekend with a 9-6 win behind three hits and five RBIs from Emme Martinez.

A loss in the quarterfinals would hand the talented senior class of Dreswick, Murphy, Chloe Sharabba, and Jordan Chimento its fourth quarterfinal loss in a row. It’d be a brutal way to go, especially after securing a third-straight 30-win season. Head coach Ashley Obrest has plenty of talent and there’s been flashes of greatness throughout this year, whether it was the lengthy win streak, or an impressive conference win over Florida State. It’s just a matter of overcoming that first hump, a first-round win that has eluded them for almost a decade. Notre Dame isn’t the ideal opponent, by any means—the run differential in the three-game series favored the Eagles by just one. Even more prevalent is that the Irish knocked them off last season in an identical 4/5 seed matchup, so the history is there. With a win, BC will need the pitching staff to shake off any late season struggles, and the Murphy-led lineup will need to continue to impress. 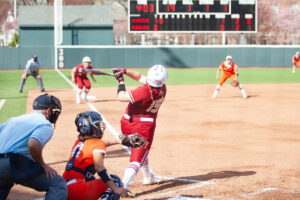