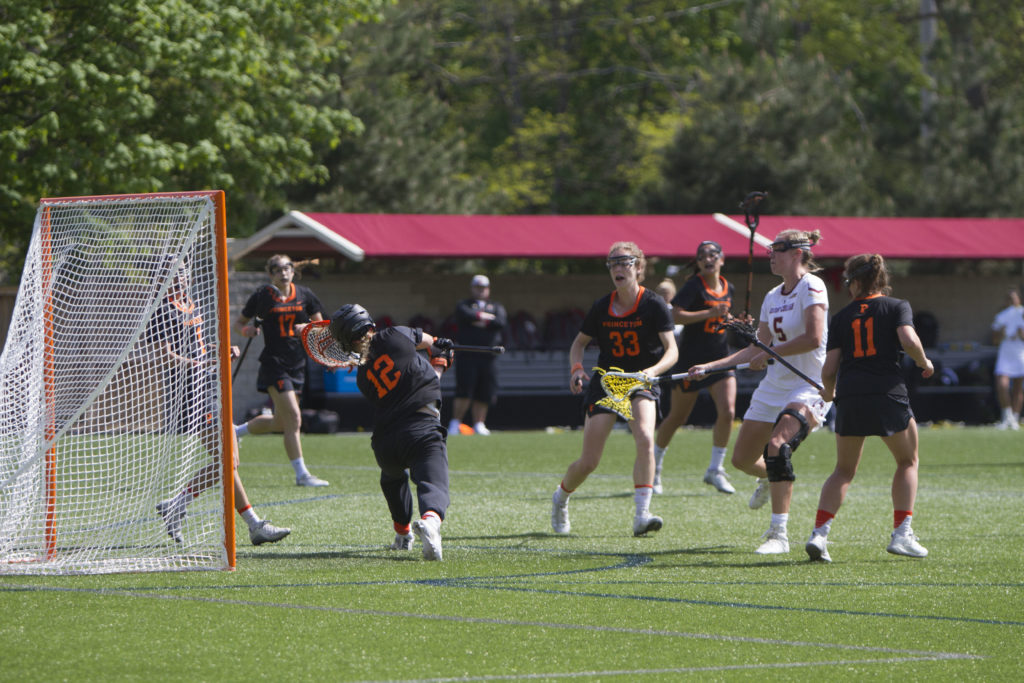 Two weeks ago, Boston College lacrosse—once the top-scoring team in the nation—struggled to find of the back of the net when it mattered most: the ACC Championship. In fact, North Carolina held the Eagles scoreless for over 10 minutes of play on two separate occasions. Sam Apuzzo—the country’s third-leading scorer—finished with four goals, but, at times, was nowhere to be found. Like most teams, the Tar Heels tried to take the Tewaaraton finalist out of the game.

Not only did UNC curtail Apuzzo’s production, but it also shut down Dempsey Arsenault, BC’s primary facilitator. The junior managed one goal and two assists on the day, marking just the third time all year that she failed to rip twine more than once in an ACC game. The Eagles were out of sync, and, quite frankly, looked helpless on the offensive end of the field. Kaileen Hart and Tess Chandler knew that shouldn’t have been the case.

“When teams stop Sam and Dempsey for a little bit, that’s when we need to step up, and we felt like we didn’t do that in the UNC game,” Hart said. “We were kind of pissed off at ourselves.”

Instead of hanging their heads, the seniors took to the field. In the two weeks leading up to the Eagles’ first game of the NCAA Tournament, Chandler and Hart put up a number of shots on goal before and after practice. It’s safe to say that the extra hours paid off.

On Sunday afternoon, Princeton did its best UNC impression, silencing Apuzzo and Arsenault for the first 29 minutes and 37 seconds of play. But this time around, their captains filled the void, big-time. Hart scored four first-half goals, propelling BC to an early lead, and Chandler took over the game in the second half, feasting inside the eight. When all was said and done, the duo recorded five goals apiece, tying career-highs, all while guiding the Eagles to a 16-10 victory—one that sends the program to its second-consecutive and third-ever Elite Eight.

Fittingly, Chandler drew first blood. About a minute into the game, Lauren Daly, who logged eight saves on the day, stopped an Allie Rogers shot, and fourth-seeded BC (20-1, 7-0 Atlantic Coast) pushed the ball up the field. Eventually, Emma Schurr, after pulling out Tigers goaltender Sam Fish, flicked a pass to Chandler. The redshirt senior capitalized, whipping a shot into the back of the cage before Fish could get back into position.

Soon enough, Princeton (13-6, 6-1 Ivy League)—a team that won its past two games by a combined four goals—clapped back. Tess D’Orsi scooted by her defender on the left side of Daly and capped her first scoring play of the day. The quick response was deceiving. It’d be another 13 or so minutes before the the turnover-prone Tigers got on the board again.

In the meantime, Hart took matters into her own hands. Over the course of five minutes and 16 seconds, the senior strung together a hat trick. Using a variety of hesitation moves to shake defenders, Hart bullied her way through the Princeton defense at will, giving BC an early three-goal lead. Cara Urbank must have been taking notes. A couple minutes after Hart polished off her scoring spurt, Urbank recorded an unassisted goal of her own. Dancing inside the 18, the sophomore faked a shot, sprinted left, and then cut back, creating enough space for her to hurl the ball past Fish.

Just when it looked like the game was getting out of hand, Kyla Sears—the Tigers’ leading scorer—came to the rescue. From the right side of the goal line, the freshman sprinted by Hannah Hyatt and Christina Walsh, setting up a one-on-one with Daly. Sears went low, and Daly went high, as the junior goalie watched the ball bounce into the net. Moments later, Colby Chanenchuk lofted a pass to a cutting Elizabeth George, who promptly ripped twine, drawing within two goals of BC.

Perhaps frustrated with her reduced scoring output, Apuzzo fouled George after losing the ensuing draw control—as a result, Apuzzo was issued a yellow card. Rather than milking the shot clock to expedite the junior’s return, Hart went to the cage and scored her 50th goal of the season. Right on cue, Chandler chipped in another with close to eight and a half minutes remaining in the period. Hovering along the goal line, Schurr floated a pass to a charging Chandler, who—in one motion—caught the ball and swung her stick, restoring the Eagles’ four-goal advantage.

All Princeton had to offer the rest of the half was one goal. BC, on the other hand, upped its lead to five in the waning minutes of the period, thanks to Urbank and Apuzzo. Even though the Eagles—who recorded 15 of the game’s first 24 shots—were in the driver’s seat, they were far from perfect. Just like the Tigers, BC had hard time controlling the ball. Turnovers were anything but a rarity: By the game’s end, the two sides piled up a total of 37, flip-flopping possession on a regular basis.

The teams coughed up the ball and exchanged a few fouls in the beginning of the second frame, effectively freezing the game at 9-5. But Kathryn Hallett got things going, three and a half minutes into the period, with her 29th goal of the year. The scoring play was just the start of a 3-1 Princeton run. Sears and George tag-teamed to log the next two goals after Chandler polished off her seventh hat trick of the season. All of a sudden, the Tigers were back within three with 20 minutes to force their second-straight overtime affair.

Approaching the midway point of the period, Chandler caused a crucial turnover in Princeton territory. The Hopkinton, Mass. native scooped up the ground ball, ultimately setting the stage for Arsenault’s first and only goal of the afternoon. In every sense of the word, the sequence rejuvenated the midfielder, who went on to assist three of BC’s final six scoring plays.

D’Orsi fueled the Tigers’ final push, scoring two of Princeton’s last three goals of the afternoon, but the comeback effort fell far short of matching the ACC regular season champions. In the final six minutes, Chandler and Hart finished the game just like how they started it. Hart drew the Tigers goalie out of the crease with a shot fake and bounced the ball toward the far-post side of the net. Then, to put an exclamation point on the postseason victory, Chandler received an Apuzzo feed and megged a lunging Fish.

The two captains accounted for 10 of BC’s 16 goals, and—arguably more impressive—18 of the team’s 35 total shots. Putting the ACC Championship behind them, Chandler and Hart have vaulted the Eagles into a heavyweight matchup with fifth-seeded and undefeated Stony Brook—a game that head coach Acacia Walker-Weinstein couldn’t be more excited about.

After watching UNC ruin their own perfect season, the Eagles will now have a chance to play spoiler with a trip to the Final Four on the line in Newton. 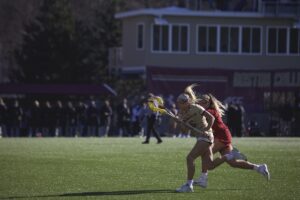 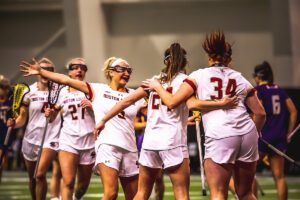