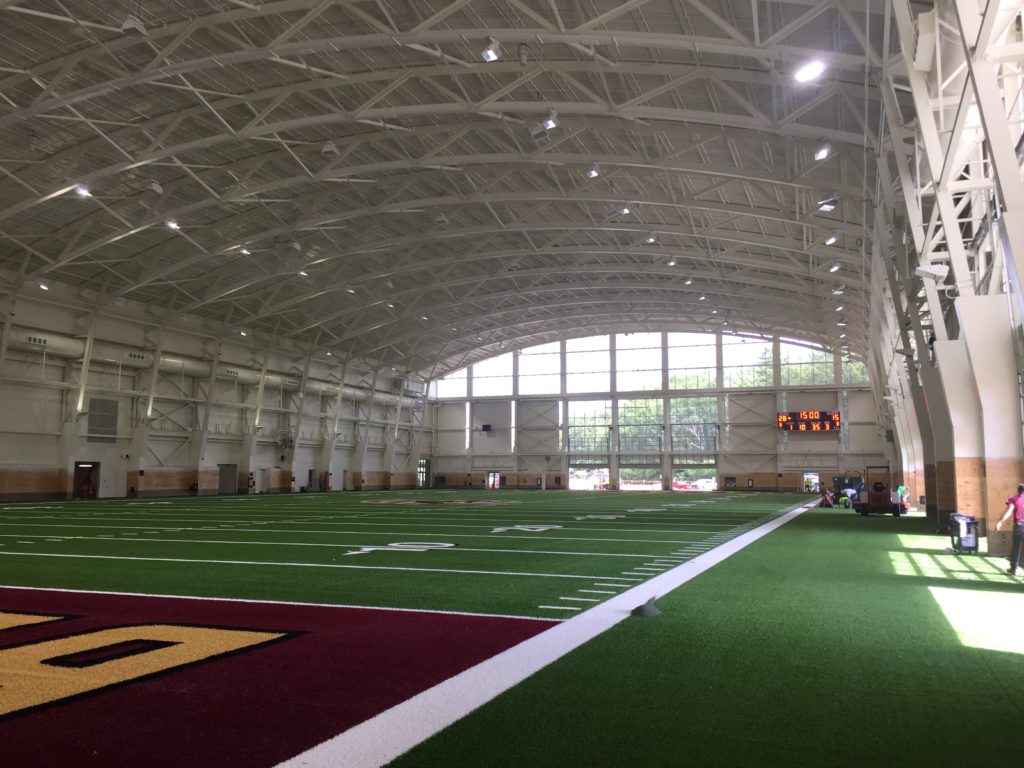 At the turning point of last season, Boston College football head coach Steve Addazio proudly declared, “It’ll come together, and it’ll be beautiful.” Now, the phrase can be applied in a much more literal sense.

Wednesday morning, Addazio and Director of Athletics Martin Jarmond were on hand to present an early look at the latest BC Athletics investment, a $52.6 million, 115,700 square foot athletic field house.

The Fish Field House—funded by over 200 individual donor families—is named after current BC Trustee Associate and Board of Regents Chairman John Fish, the Suffolk Construction CEO, whose family gifted a large sum to the project. Although still in the final stages of completion, the project, which will also be used by 10 other varsity sports programs, is fully equipped with both an indoor and outdoor field, as well as a workout area for the team.

The indoor field boasts a monstrous 32-by-18-foot video board—now the second largest of any ACC practice facility—in the south endzone, in addition to two large scoreboards identical to the ones found within Alumni Stadium. The turf, too, matches that found on BC’s home field, as the team architects made a point of maintaining consistency, as far as field details are concerned.

One difference to note, however, is the goal posts in each end zone. Rather than being erected from the ground up, the yellow beams hang among the rafters, and can be lowered down when necessary. Furthermore, the indoor field features multiple video cameras and a coaches booth, meaning that Addazio and his team are now able to access and analyze practice footage like never before.

As for the outdoor field overlooking the Chestnut Hill Reservoir, the Eagles plan to use the space during nice weather practices, as well as to prepare for road games in which they will be playing on grass—four of which are included on this year’s schedule.

Directly adjacent to the outdoor field is the indoor workout room. The 8,000-square-foot space is more than twice as large as the Eagles’ previous strength and conditioning facility inside Conte Forum, exclusive to the football team, and resides next to a team nutrition station.

Both Jarmond and Addazio alluded to the fact that the Fish Field House, coupled with the current rise of ACC Preseason Player of the Year A.J. Dillon, is enough to slingshot the Eagles’ recruiting pitch past a number of other ACC programs’. It won’t be long before fans and students find out just how much of a difference the installation can really make.