Dillon’s debut season was a tale of two halves: In the first six games of the year, he gained 333 yards and scored one touchdown. In the final seven games, he chewed up 1,256 yards from scrimmage and found the end zone 13 times.

In BC history, only star quarterback Matt Ryan has won ACC Player of the Year (2007). That season, he passed for 4,507 yards and 31 touchdowns. The last rusher in ACC history to win was Pittsburgh’s James Conner, who recorded 1,765 rushing yards and 26 touchdowns in 2014 to claim the hardware.

In terms of the preseason award, the last Eagle to receive the honor was running back Montel Harris. He was given it before his senior season in 2011—after totaling more than 3,600 yards during his first three years in Chestnut Hill. Unfortunately for BC, he sustained a knee injury halfway through the season that ended his campaign early, right after he broke BC’s all-time rushing record. He never appeared in another game for the Eagles—he was dismissed from the team for violating team rules a few months after he was medically cleared to redshirt for the 2012 season. 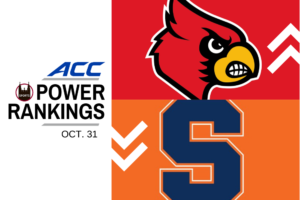