Behind Enstrom’s Brace, Eagles Hang on to Beat Quinnipiac

Boston College men’s soccer has only posted one winning record in the past five seasons, and it’s not because of its performance in non-conference play. In fact, the Eagles have had the upper hand in the majority of their out-of-league matches during that span, particularly those at the start of the season. Over the course of the past three years, BC has stitched together a 6-0 record in August, outscoring Quinnipiac and Boston University by a combined 13 goals. Luckily for the Eagles, they’re opening the 2018 season against the same two opponents, and on Friday afternoon, it already looked as if they’d waltz to another undefeated start.

For the second-consecutive season, Simon Enstrom—who currently ranks eighth on BC’s all-time scoring chart—logged the team’s first goal of the fall. Not only that, but the senior captain tacked on another scoring strike less than 20 minutes later to give the Eagles a sound 2-0 lead. Although BC dominated possession the rest of the half, Quinnipiac wasn’t about to let its New England foe off easy, not for the fourth year in a row.

With nine minutes remaining in regulation, Eamon Whalen scored off a header to cut BC’s lead to one, marking the Bobcats’ first goal against the Eagles since 2013. But when it mattered most, goalkeeper Joe Fryatt and the BC backline buckled down to secure the 2-1 win—the Eagles’ fourth-straight season-opening victory.

BC (1-0) controlled possession throughout the first 45 minutes of the match, logging four shots during the period. That said, it really wasn’t until the 10th minute that head coach Ed Kelly’s team got a great look on net. Both Enstrom and midfielder Kristofer Konradsson whipped up shots from distance, but neither found the back of the cage. Enstrom wouldn’t have to wait much longer to etch his name in the scorecard, though.

About two minutes later, the Huddinge, Sweden native capitalized on a poorly played Quinnipiac (0-1) pass in the Eagles’ half, dribbled toward the 18 and then—between two Bobcat defenders—ripped a shot past the outreached arms of a leaping Chrysostomos Iakovidis. Just like that, Enstrom was on the board and licking his chops for more.

Before the senior could bag his first brace of the season, his fellow captain tried his hand at goal scoring. In the 22nd minute, midfielder Lasse Lehmman floated the ball to the right corner of the field for Trevor Davock, who corralled the pass and flicked it over his defender to open space inside the box. Eying Joshua Forbes, Davock served a cross to his senior teammate, but before Forbes could get a shot off, Quinnipiac booted the ball out of its own territory.

Approaching the 30-minute mark, Enstrom made the most of another Bobcats mistake—this time, he had a little help. Following a long Davock throw-in, Lehmman intercepted a Quinnipiac clearance attempt and fed Enstrom, who was all alone inside the 18 with only the keeper to beat. As soon as he received the pass, the senior drifted toward the right, pulling Iakovidis with him, and then drove a low shot into the left corner of the cage for his second scoring play of the afternoon.

The Bobcats started to build momentum toward the end of the period, even crossing the ball into the box for Jeppe Haehre with 16 seconds left in the half, but the game really started to balance itself out after intermission.

Following another 20 or so minutes of turnover-heavy soccer, Quinnipiac head coach Eric Da Costa subbed in junior Conor McCoy. The second-team All-MAC defender only notched one point last season, but was certainly the spark plug on Friday. Minutes after McCoy checked in, the Bobcats made a run. Pushing the ball upfield on the counterattack, Romain Daniellou completed a pass to Salah Oumorou. The sophomore was stopped short of the net, but thanks to a Joe Kellett deflection, the offensive surge wasn’t for nothing. On the ensuing corner, McCoy fought for positioning and got a piece of the cross, coming away with the Bobcats’ best scoring chance in quite some time.

From then on, Quinnipiac didn’t take its foot off the gas, ultimately outshooting the opposition, 6-2, in the second half. Freshman defender Jordon Bennett was at the source of the Bobcats’ late-game revival. Playing right back, the Tumi Umi, Australia native frequently creeped toward the Eagles’ half, working the right corner of the pitch. In the 79th minute, Bennett found an opening in that exact location and lifted a cross for a streaking Whelan. Fortunately for BC, Forbes disrupted the play, forcing Bennett to put too much power on the service, as the ball sailed past Whelan and everyone else on the field.

But, just two minutes later, Bennett gave it another go. Accounting for his previous mistake, the freshman used his finesse to loop the ball into the box for a leaping Whelan. The 6-foot forward timed his jump perfectly and headed the cross past Fryatt for the Bobcats’ first goal of the game. The Eagles resembled a different team than the one that flaunted a two-score lead in the first period. Quinnipiac was getting every look it wanted in the final 10 minutes of regulation. Its best chance to equalize came in the 88th minute.

Matthew Taylor located Bennett, where else but on the right side. On cue, the defender dialed up a cross for Rashawn Dally. The senior took one touch before launching a shot on net. Fryatt watched as it traveled over the net, inches away from the crossbar. BC held on for the win, improving to 18-11-2 in season openers under Kelly.

Enstrom is picking up right where he left off last season, but until the team faces Providence on Aug. 31, it’ll be hard to take any stock in Friday’s victory. One thing’s for certain—BC can’t afford that kind of second-half breakdown against any other opponent this season, not if the Eagles are going to come anywhere close to their 2017 scoring average of 1.29 goals per game. 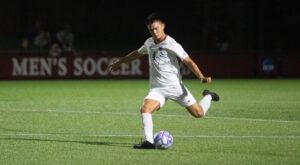