Home » After 32-Year Hiatus, BC Set to Renew Rivalry With Holy Cross 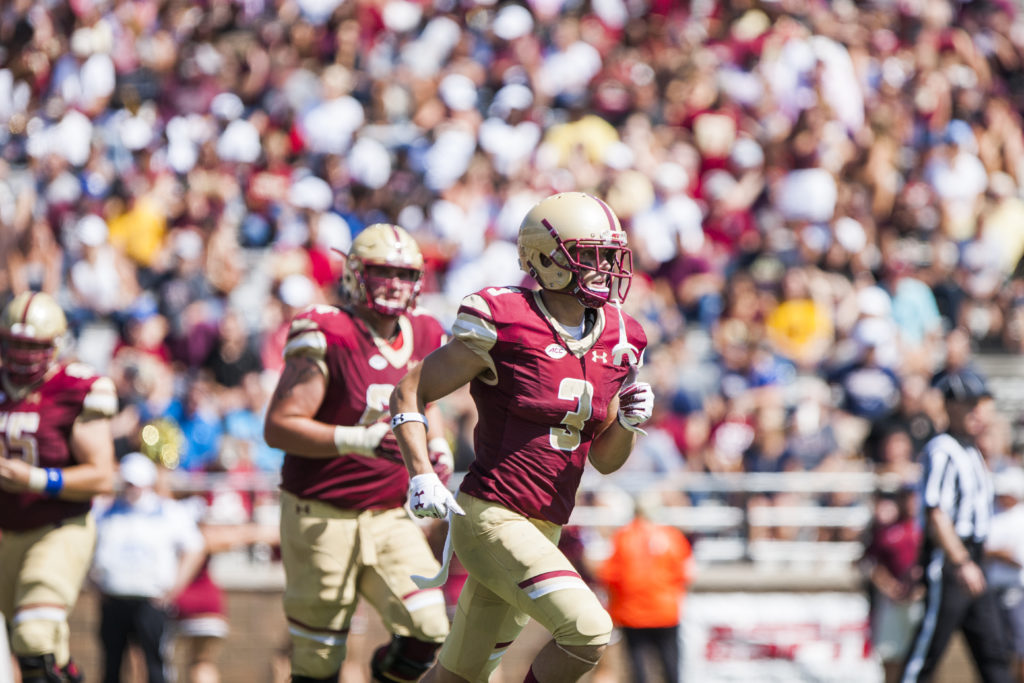 After 32-Year Hiatus, BC Set to Renew Rivalry With Holy Cross

It’s no Lehigh-Lafayette, Harvard-Yale, or Army-Navy game, but the Holy Cross-Boston College rivalry is one of college football’s most storied matchups. For the majority of the 20th century, the annual game between the two schools—located just 41 miles apart—was a New England attraction. Head coach Steve Addazio remembers those days vividly.

During Monday’s weekly press conference, the sixth-year Eagles coach smiled while recounting numerous trips that he and his friends made to Massachusetts to watch the two in-state programs square off in the cold fall weather. Since Addazio was playing ball at Central Connecticut State at the time, the drive was hardly taxing and well worth a couple hours on the road. In his eyes, he was heading to a “big-time college football environment”.

Now an inter-division game being played in the heat of September, the rivalry doesn’t have quite the same appeal as it did in the ’80s, but come Saturday Addazio will be watching those same two teams butt heads—only this time, he’s responsible for the outcome.

The Week Two matchup brings an end to the game’s 32-year hiatus. After playing each other practically every year from 1896 to 1986, Holy Cross decided to join the FCS and terminated the series. But, thanks to the restoration of the Crusaders’ football scholarships, the two sides agreed to renew the rivalry back in Jan. 2014, scheduling a pair of games to be played at Alumni Stadium in 2018 and 2020.

Overall, the two teams have met 82 times, with BC leading the all-time series, 48-31-3. At first, the matchup was extremely competitive, but over time it became more of a tradition. In fact, the Eagles won 17 of the last 20 contests, by a wide margin too. This year’s meeting will most likely serve the same purpose—a reunion of sorts.

BC is coming off one of its more dominant performances in recent memory. Anthony Brown recorded 279 yards and four touchdowns through the air, orchestrating six touchdown drives—four of which spanned at least 70 yards—in the first half of the Eagles’ season opener against Massachusetts. A Lukas Denis pick-six capped a 48-point first half that set the stage for a five-touchdown blowout. When all was said and done, BC racked up 622 total yards offense, the most it’s logged in a single game since 2003.

That was UMass—a team that rolled over FCS Duquesne by a score of 63-15 in its own season opener. It’s safe to say, Holy Cross, another Subdivision One program, will have its hands full this weekend.

If it wasn’t for a second-half comeback this past Saturday, the Crusaders could have very well been blown out themselves. Patriot League foe Colgate marched into halftime with a 24-0 lead, in large part because of quarterback Grant Breneman’s performance. In what was surely a too little, too late effort, Holy Cross threw up 17 points in the final two frames. Running back Domenic Cozier was at the heart of the second-half rally, scoring both touchdowns—one through the air and one on the ground—to give the Raiders a scare.

The duo of Cozier and fellow running back Miles Alexander presents the biggest threat to BC’s defense. Against Colgate, the two combined for 208 yards from scrimmage. Of course, Crusaders quarterback Emmett Clifford has Blaise Bell and Martin Dorsey on the outside, but the junior is as inexperienced as they come. Sitting behind Peter Pujals, who spent this summer with the Minnesota Vikings as an undrafted free agent, as an underclassmen, Clifford has just 23 completions and two touchdowns to his name. If he faces the same kind of pressure that haunted Andrew Ford and Ross Comis last week, the junior could be in for a long day.

BC’s pass rush shined in Week One, totaling six sacks on the afternoon. But the defense was almost an afterthought—Brown stole the spotlight, posting career numbers in just one half of play. Hitting short, intermediate, and deep throws, both stationary and those on the run, the redshirt sophomore looked better than ever before, nine or so months removed from tearing his ACL.

“I thought Anthony Brown came out and played with great confidence, which was a real important thing to see in Week One for him,” Addazio said. “He ran the team well. He threw the ball well. He handled all the mental checks within the game and was a great leader on the field.”

The second-year signal caller spread the ball around to nearly all of his targets. By the end of the game, 11 different players had nabbed at least one ball. But it was the tight ends that stuck out the most. Ironically, of the Eagles’ top five tight ends, Tommy Sweeney—a member of this season’s John Mackey Award Watch List—was the only one not to haul in a reception. Ray Marten, Korab Idrizi, Jake Burt, and Hunter Long all etched their name into the box score, and Addazio was the least of surprised.

“It was a good day for the tight ends,” he remarked. “But they’re featured in our offense, so you’re going to see them involved heavily all the time. That’s not like a new phenomenon—that’s who we are.”

Odds are, the tight ends, along with the rest of the offense, will put on an encore performance this weekend. After all, BC has outscored its last three FCS opponents—Wagner, Howard, and Maine—a combined 142-10. That’s not to say that Addazio is writing the matchup off, though. He emphasized that all eyes are on Holy Cross, even with a short week at Wake Forest on the horizon.

“The most improvement your team has to make is really within the first few weeks of your season,” Addazio said. “You’re in a footrace to get better in the early part of the season, and I think [our players] totally get and understand that.”