Home » Taking a Step Back From Campus 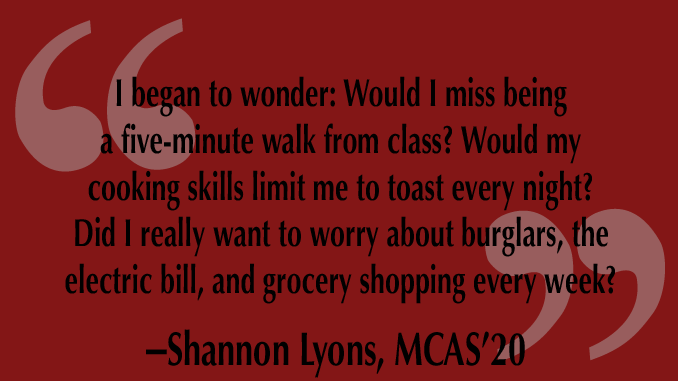 Taking a Step Back From Campus

My grandfather is one of the most persuasive people I have ever met. If and when he decides to share his opinion with you, which he does not always do, he sits up straight in his chair, looks you dead in the eye, and proceeds to present you with three clear, compelling reasons you should agree with him.

The day that I told my grandfather I was planning to live off campus this semester, his jaw nearly dropped to his feet, and his posture instantaneously became that of a ballerina. As soon as I saw his penetrating gaze, I knew a counter-argument was looming. I sighed, sat back in my chair, and listened carefully as he began to make his case.

“Number one,” he said. “If you live off campus, you’ll have to walk 20 minutes every day to class. Number two: You’ll be responsible to cook and clean for yourself. Number three: There’ll be no supervision.”

This exact conversation was not a one-time occurence. Over the course of the summer, I spent many afternoons listening to my grandfather explain why I should reconsider my housing choice. Given that I had the option to live on campus, he believed I was making the wrong decision—and because I so deeply value his opinion, I have to admit that I experienced moments of doubt. I began to wonder: Would I miss being a five-minute walk from class? Would my cooking skills limit me to toast every night? Did I really want to worry about burglars, the electric bill, and grocery shopping every week?

Ultimately, however, the temptation of living with all my friends and the freedom of having our own space prevailed. Though I’ve only lived here a week, I feel strongly that I made the right decision.

Among many cautious parents and wise grandparents, there seems to be a stigma surrounding the idea of “off-campus housing.” The word “freedom” is understood to mean recklessness. “Fun” translates to danger. “Independence” implies the potential for disaster. While it is true that being away from RAs, campus police, and school administration increases the risk of rule-breaking, that is not the reason I am so fond of the dusty apartment I call home.

Having lived on Upper Campus as a freshman and CoRo as a sophomore, I spent the first half of my college experience eating, sleeping, and breathing in the heart of campus. As a freshman, this was exactly what I needed. Being a mere five-minute walk from my classes, the library, and the Plex made everything feel more manageable and lent a sense of familiarity to what initially felt like a foreign place. Campus quickly became my home base: a place where I could socialize, study, sleep, eat, and exercise. As a college newcomer, I was infinitely grateful for this sense of containment, this territory within which all my needs were provided for.

It really wasn’t until the latter half of my sophomore year, however, that something in my perspective began to shift. I suddenly began to crave a sense of division—it wasn’t that I wanted to remove myself from campus altogether, but rather that I wanted to separate the various aspects of my life and create an element of space between them. Living on CoRo, I studied in the same room that I hung out with my friends on Saturday night. I slept less than a hundred yards from the classrooms where I took my exams. I drank my morning coffee at the same table that I ate my dinner. There is, of course, nothing objectively wrong with this. Retrospectively, however, I’ve realized that there is something valuable about segregating the different facets of the self, separating work from play and sleep from study.

Though I’ve only lived off campus for less than a week, I already feel a newfound ability to compartmentalize the roles that I play in my day-to-day life. Surprisingly, the somewhat tedious walk home from class allows me to decompress and to switch out of the mode of a student. Suddenly, I am an ordinary person in the “real world” returning home from a long day’s work. Making dinner for myself, wiping the bathroom counters down, and locking the doors at night lends me a sense of responsibility that is precisely nonacademic, and there is something strangely refreshing about that. Paradoxically, living away from the buildings where I study and take exams motivates me to exert more effort when I return to them the next day.

Walking to class in the morning along Comm. Ave., I can see St. Ignatius Church ahead, with its brilliant stain glass windows sparkling in the sun. In the distance, I can see hundreds of students streaming up the Million Dollar stairs, talking to friends and preparing for their day. On some mornings, I can hear the bells of Gasson Hall ringing out into the late summer air. It’s during moments like these that the “big picture” suddenly crystallizes and everything comes into perfect clarity. It’s during moments like these that I realize I’m exactly where I’m supposed to be.