Born in Portland, Oregon in 1953, Weems began involving her art in social activism in the ’70s. Initially involved in theater and dance, Weems found photography as her medium of choice, but also expanded her artistry to videos, performance, and installations. Her art dives into the nation’s violent history towards its citizens of color through somber and satirical treatments of stereotypes that still have consequences today. Her work takes inspiration from archival pieces in the history of the United States, often featuring old photographs that she alters and adds to, but also works as an original photographer. Especially in our current climate of uncertainty, Weems’s work shows the brutal truth, but also offers a glimmer of hope.

“Constructing History: A Requiem to Mark the Moment” was created during the presidential election of 2008, when Barack Obama and Hillary Clinton competed for the Democratic nomination. As Obama beat Clinton and then McCain to become the first African-American president of the United States, Weems believed that the historical moments saw its roots in the assassinations and violence of the late ’60s. Working with students from the Savannah College of Art and Design and members of the Atlanta community, Weems recreated images of history using classrooms, allowing students to enter and become that history. The images consist of the subjects in black and white, showing momentous events such as “The Assassination of Medgar, Martin, Malcolm,” allowing a new generation who were not yet born during that time to experience and feel the history with their own construction.

“The Hampton Project” critiques the Hampton Normal and Agricultural Institute in Virginia, which was founded to provide vocational training to Native Americans and recently freed slaves after the Civil War. Although the mission was optimistic, the school enforced strong assimilation that stripped the students of their own unique cultural heritage and identity. This sections consists of muslin canvasses hanging from the ceiling, on which are printed photographs from the school and scenes such as Ku Klux Klan parades, encouraging the audience to ponder the relationship between education and systematic injustice.

Weems’s next series ties into her theater and dance background, as she herself becomes the subject of her photography. “The Louisiana Project,” also called “Missing Links” refers to an infamous Mardi Gras parade in 1873 titled “The Missing Links of Darwin’s Origins of Species,” where white supremacists twisted Darwin’s theory to criticize positions the liberated African-Americans were able to achieve. Satirizing this sentiment, Weems puts on various animal heads and uses playful poses to counter the dehumanizing sentiment with grace and humor.

“Ain’t Jokin’, American Icons, and Peaches, Liz, Tanikka, and Elaine” are series from early in Weems’s career, where she addresses stereotypes of African-Americans, and tears them down. Through her satirical photos, Weems took control of negative caricatures associated with African-Americans and used them against themselves.

“From Here I Saw What Happened and I Cried” is an archival exhibit that the J. Paul Getty Museum commissioned from Weems in 1995, where she used archival images of mid-nineteenth century African-Americans and altered them to convey a new meaning and significance. Using techniques such as cropping, tinting, and overlaying images from the archives and other sources, she creates a narrative of American race relations from past to present. Especially effective are bold texts that she adds onto the photo, including captions such as “You became a scientific profile; A negroid type; An anthropological debate; A photographic subject,” Neems further explores the dehumanization of black subjects throughout American history. The exhibit also features the video Lincoln, Lonnie, and Me, Weems uses the “pepper’s ghost” effect developed in the nineteenth century to discuss and meditate on race and gender, featuring apparitions such as Abraham Lincoln, a boxer, a dancer, and a Playboy Bunny, with commentary from her friend and fellow artist Lonnie Graham and Weems herself.

Weems’s most recent works—“All the Boys,” “Usual Suspects,” and “People of a Darker Hue”—address recent events of police brutality. With print outs of police reports, photographs of young, African-American men suspected of crimes, Weems addresses the injustice in the police system.

Highlighting injustice, but also preaching empowerment, Weems’s work is both critical and hopeful. Using a dark humor in many of her works, Weems satirizes demeaning and hurtful actions and instead, takes power over them, creating a narrative that has aesthetic and political power and that encourages people to think more about the politics and the history of this nation. 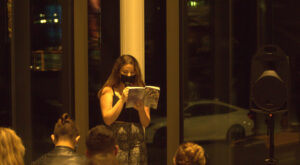 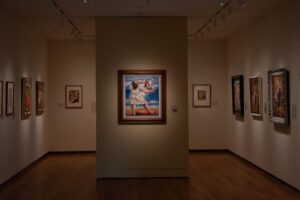 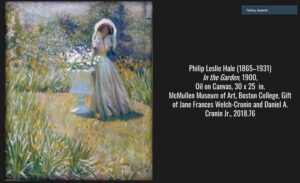