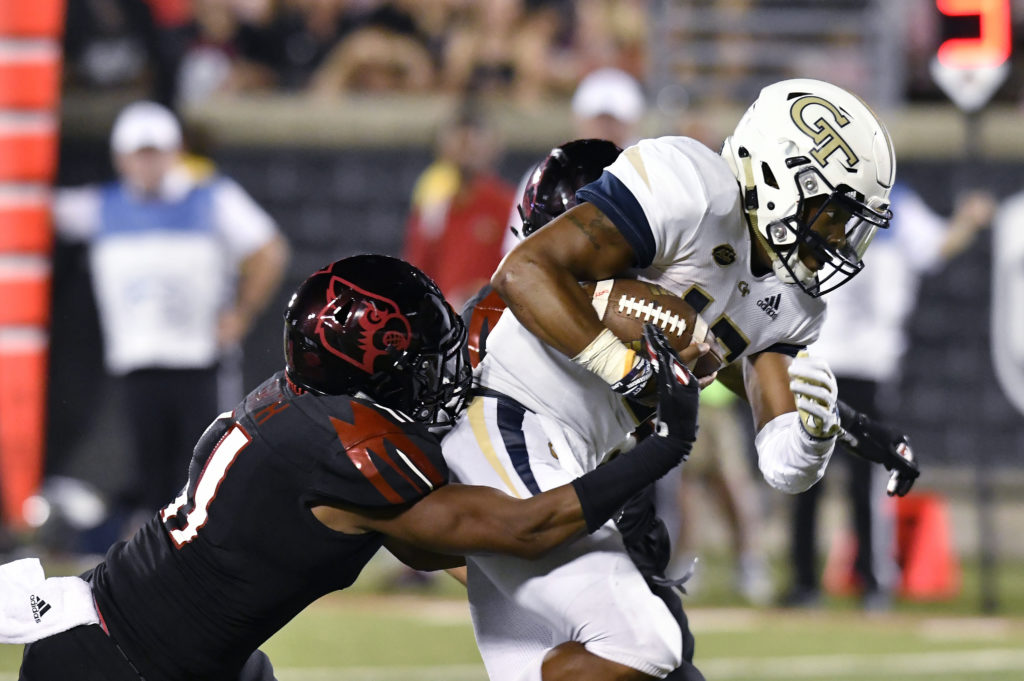 BC Poised for Big Day on the Ground Against Reeling Cardinals

The last time Boston College football hosted Louisville, Lamar Jackson picked apart the Eagles’ secondary, both through the air and on the ground. Scoring at will, the Heisman Trophy winner racked up 416 total yards and a whopping seven touchdowns, guiding the Cardinals to a lopsided 52-7 victory—a blowout that head coach Steve Addazio did not forget.

“People put the tags of geniuses on people,” the sixth-year Eagles coach told reporters during Monday’s weekly press conference, per BCEagles.com. “Sometimes when you got erasers like that, it makes a lot of people real smart, because [Lamar] was an eraser. You could have the perfect defense called, and he can go 90 on you.”

Luckily for Addazio and the entire BC coaching staff, Jackson is no longer keeping Louisville afloat—instead, he’s backing up Joe Flacco in his rookie season with the Baltimore Ravens. The departure has to come as a huge relief for the Eagles. After all, if it wasn’t for A.J. Dillon, BC would currently be staring at a four-game losing streak against the Cardinals.

In last year’s matchup, Jackson put on an encore of sorts, logging a total of 512 yards of offense—112 more than the Eagles had tallied in a single game all season—and five touchdowns. But Dillon stole the show with 272 yards, four touchdowns, and debatably the stiff-arm of the year, leading BC to a narrow 45-42 win, its first over Louisville since 1994.

This time around, however, the Eagles might have to beat the Cardinals without their star running back. On Monday, Addazio said that the sophomore—who didn’t even make the trip to North Carolina State last week—is day-to-day and still rehabbing his injured left ankle. Then, on Wednesday, ESPN college football writer David Hale tweeted that Addazio called Dillon a game-time decision and ultimately described the running back’s return as a “race against the clock” amid the weekly ACC football coaches teleconference.

Addazio says AJ Dillon will be a “game time decision” vs. Louisville. Said a few days ago, would’ve said he was out, but he’s progressed quickly. Calls it “a race against the clock."

Yet, regardless of who’s carrying the rock, there should be quite a few holes on Saturday. As of now, the Cardinals have the 118th best—in other words, the 11th-worst—rushing defense in the country. On average, first-year defensive coordinator Brian VanGorder’s unit is giving up 231 yards on the ground per game.

Just this past weekend, Georgia Tech rolled over Louisville, recording 542 rushing yards and eight touchdowns, meaning that the Yellow Jackets ran for two more scores than they converted third downs. To be fair, GT’s spread-option attack is unrivaled. In fact, the Yellow Jackets lead the FBS in rushing. That said, the Cardinals’ inability to stop the run is very much real. In all but one game this year, Louisville has conceded 165-plus rushing yards.

If Dillon doesn’t play, Ben Glines will likely receive the bulk of the workload on Saturday, but Addazio emphasized that he wants to get Travis Levy and even David Bailey—who hasn’t played since Week Two—involved as well. Addazio said that BC was so accustomed to playing with Dillon that now it’s tasked with learning how to establish a new offensive rhythm.

Evidenced by last week’s struggles, the adjustment certainly is a process. Up until their final drive of the third quarter, the Eagles had only totaled 109 yards of offense.

“We saw some really fabulous plays out there,” Addazio said. “The shame was we left more than a handful in the first half, we left them on the field. And they were pretty obvious to see.”

The only reason why BC had a chance to stage a fourth-quarter comeback was because of its four takeaways and, more notably, its special teams play. Special teams coordinator Ricky Brown’s unit—a group that was ridiculed throughout the first five weeks of the season—balled out against N.C. State, jarring a punt return loose and blocking both a field goal and a punt, the latter of which resulted in six.

Unfortunately for Addazio, between injuries and fatigue, the other two phases hardly functioned at the same level. Largely due to the fact that the Eagles were only 1-of-10 on third down, their defense was stuck on the field for 41 and a half minutes. To cope with the lopsided possession battle, Addazio shifted players around to give certain guys breathers throughout the game. Mike Palmer ended up playing a lot of safety, Lukas Denis slid down to corner, and John Lamot saw quite a few snaps at the linebacker position.

“Thank God we have a little depth there, so that we can make a couple of those moves,” Addazio said. “Some things looked good to us. Some things didn’t look as good. So we are just going to march forward.”

BC and Louisville might be trending in opposite directions, but it’s clear that both are still working out their fair share of kinks, whether they be injury-induced or schematic-based.