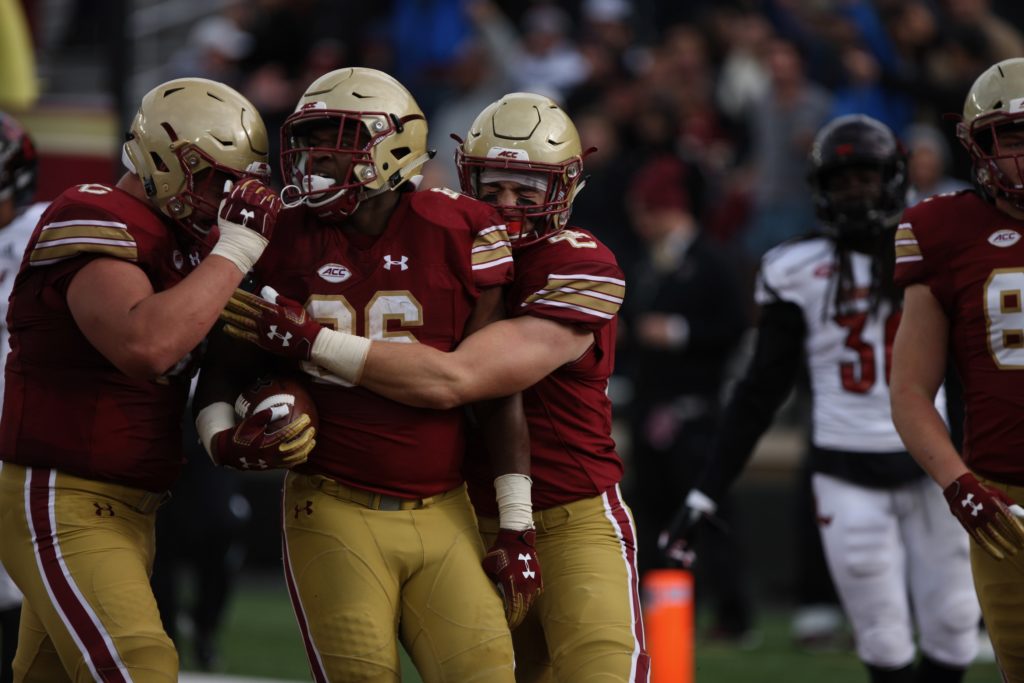 Boston College football running back David Bailey’s first career rushing touchdown was somewhat of a tease. The true freshman found the end zone in the back half of the Eagles’ season-opening rout of Massachusetts. He ran the ball 11 times the following week for 80 yards before sitting out the next four games, including last Saturday’s loss at No. 23 North Carolina State. But with Heisman Trophy candidate A.J. Dillon out with a left ankle injury for a second-consecutive week, and Ben Glines struggling on the ground, Bailey heard his name called for the first time in a month.

The true freshman made the most of the opportunity, doing his best Dillon impression—one that was extremely believable. Not only is the 6-foot-1, 245-pound Bailey practically identical in size to his sophomore counterpart, but he also runs like him too. The deceptively agile Ridley, Md. native spearheaded a second-half Eagles rushing attack that butchered Louisville for 178 yards, making up for two early turnovers and seven total penalties in the process. Jawon Pass and the Cardinals couldn’t keep pace, and BC walked away with a 38-20 victory.

Louisville won the coin toss and elected to receive, eager to get off on the right foot after playing from behind all last week against Georgia Tech. Instead, the Cardinals went backward. Louisville mustered a combined -1 yards over the course of its first two drives. Wyatt Ray dragged down Pass—his first of three sacks—and Connor Strachan mauled Hassan Hall behind the line of scrimmage. Four days removed from Tutu Atwell’s comment that, when looking at BC’s defense, he sees “a lot of slow people”—a statement that head coach Steve Addazio says his guys took offense to—the Eagles flew to the ball relentlessly, making the Louisville wideout eat his words.

“There was a different energy in the hotel today before we left,” Addazio said. “There was one of those deals where we felt like this was going to be real street fight out here today.”

Jim Reid’s defense was one thing, the rain was another. Although it was just a slight drizzle, the early-game precipitation had a noticeable effect on the Cardinals. A dropped pass and mishandled snap/handoff curtailed their opening two series. Not only that, but practically the entire team donned rain jackets on the sideline. BC, on the other hand, was unfazed—it was just another fall New England day.

The Eagles jumped out to a two-touchdown lead, engineering back-to-back scoring drives to start the game for the second time this season.

Thanks to prime field position, it only took five plays for BC to get on the board. At the Louisville 26-yard line, Anthony Brown faked a handoff to Glines and rolled right before connecting with a wide-open Hunter Long. The redshirt freshman tight end hauled in the reception, turned, and sprinted to the end zone, reaching the ball past the pylon for six. After being reviewed, the scoring play was upheld, marking Brown’s 14th touchdown pass of the season—the most of an Eagles quarterback in a single season since Chase Rettig’s 17 back in 2013.

The next drive, offensive coordinator Scot Loeffler reached into his back pocket and called for the flea-flicker. Just as he did last year at Virginia, Brown executed the play to near perfection, hitting Michael Walker in stride for a 42-yard completion. Glines finished the job, dancing outside the tackles and scampering into the end zone for his sixth total touchdown of the season.

BC was in complete control, and Louisville’s defense was anemic at best. Dating back to last weekend’s blowout loss to GT, Bobby Petrino’s team had gone 10-straight drives without preventing a touchdown. But all it took was two Eagles turnovers for Louisville to change the complexion of the game.

Glines fumbled at BC’s 6-yard line, essentially gifting the Cardinals four free chances to punch the ball into the end zone. They did just that: On 4th-and-1, backup quarterback Malik Cunningham pushed through the Eagles defensive line, spun while being tackled, and attempted to lunge the nose of the ball past the goal line. Initially, he was ruled short, but after a five-minute review, the call was overturned, and Louisville cut its deficit in half—well, almost.

Zach Allen blocked the ensuing extra point, preserving an eight-point BC lead. Yet, just when it looked like the Eagles were going to resume their scoring spurt, Walker coughed up his second kickoff of the season. An unsportsmanlike conduct penalty backed up the Cardinals a bit, but, ultimately, the flag didn’t matter. Pass orchestrated a five-play, 40-yard scoring drive—one that culminated in a 3-yard Hassan Hall rushing touchdown.

When the Eagles finally got the ball back, the offense looked out of sorts. Glines struggled to find running room, and Brown’s accuracy dipped. Even a Hamp Cheevers interception wasn’t enough to spark Loeffler’s unit. So, like the past few weeks, BC’s defense was stuck on the field.

Using the read-option, Pass moved the sticks at will, recording 26 yards on the ground amid a nine-play, 73-yard touchdown drive. With the goal line in sight, the sophomore signal caller faked a handoff to Hall and dashed into the end zone, practically untouched.

Trailing, 20-14, Addazio turned to Bailey—someone who he wished he had played the week prior at N.C. State.

“Every week I am always ready—it’s the next-man-up mentality,” Bailey said. “Coach called my name today, and I went in and played ball like I always do.”

As soon as he entered the game, the Eagles’ run game looked different, somewhat reminiscent of Dillon’s ground-and-pound attack. Bailey alone wasn’t enough to turn around the BC offense—not yet, at least. That was left to the Eagles special teams.

For the second-consecutive week, BC blocked a punt—this time Nolan Borgersen did the dirty work—and Travis Levy tracked it down in the end zone for a touchdown. Then, Colton Lichtenberg tacked on a 39-yard field goal at the end of the half to give BC a four-point cushion entering intermission.

In the second half, Bailey stole the show. The true freshman carried the ball 23 times for 87 yards. Of those 23 rushing attempts, eight came on the Eagles’ opening series of the fourth quarter—a drive that enabled BC to pull away from its Atlantic Division foe. Bailey capped off the 93-yard series with a 1-yard touchdown, what would have been his second of the day had a 32-yard third-quarter score not been called back.

As Louisville’s run defense collapsed, so did its offense. After scoring three touchdowns in the span of 11 minutes of game time during the opening half, the Cardinals—at one point inserting third-stringer Jordan Travis—showed little to no signs of life in the final portion of play.

Eventually, the Eagles started to milk the clock and, in doing so, scored one final touchdown. Glines picked up 41 yards on a draw play out of the shotgun, eclipsing the 100-yard mark for the third time this year. Then, at the goal line, Jeff Smith dove past the pylon on a jet sweep, officially putting the game to bed.

When all was said and done, Brown finished 16-of-22 for 179 yards and a score. Bailey and Glines paved the way for a 251-yard day on the ground. And, debatably more impressive than any other statistic, the Eagles held Louisville to a mere 47 rushing yards. Even without Dillon, BC pulled itself together when it mattered most, beating up on an ACC bottomfeeder before the toughest stretch of the season.

“I guess we were just on our shit today,” Brown said. “And we needed to be.”