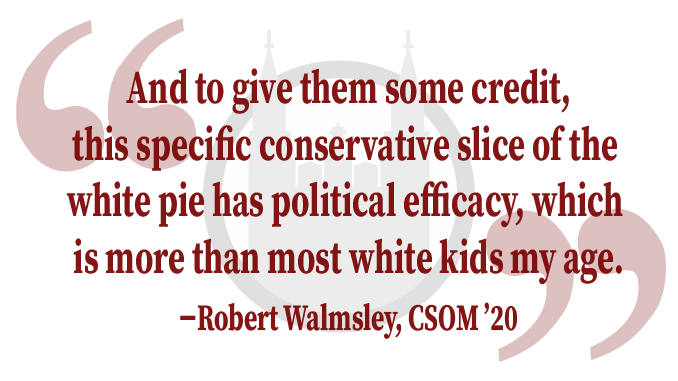 Calling an Inactive Demographic to Action

I’ll be honest, there are few topics that I have the authority or knowledge to write meaningful columns or hold substantive conversations about. I poke fun at this frequently in my articles, and most of the time I end up making a joke about some uneventful happenings around campus. I’m a 20-something college kid with an inkling of knowledge in my field of study, so what do I know? There is one subject, however, in which I have plenty of jurisdiction to speak, yet it’s often through the lens of shame: being a white male.

Us white boys have had it real tough lately, most notably past versions of ourselves unearthed in extensively detailed calendar-form. We’re being attacked, for God’s sake. Guilty until proven innocent! Yes, the white males, the faultless model citizens representing the good in a morally divided political landscape, are the ones marginalized. Not those whose identities are being written out of existence, nor those that need to stage die-ins to fight for treatment we’ve taken for granted for millennia. Nope, none of them. Just us.

At least, this seems to be the pervasive sentiment in some conservative circles lately, and one that is corrosive not only to progressive thought but also to the motivation of future political participants. The motivation within the young white male community comes out of a derived pity for oneself stemming from the antagonistic view toward the #MeToo movement instead of outrage over atrocities to legitimately marginalized groups, which should be the reason for political movement.

The misplaced motivation is detrimental because it’s not malleable—it’s already fortified within their political views. And to give them some credit, this specific conservative slice of the white pie has political efficacy, which is more than most white kids my age. Taking it even a few thousand steps further, the ignorantly radicalized Charlottesville tiki torch-bearing “protestors” are obviously firmly on one side as well. They’re still dangerous—I mean they’re white supremacists—but I don’t think they’ll be converting anytime soon. The biggest issue within the white young adult demographic isn’t the defense of historical standing within society—it’s the absence of recognition of their standing altogether.

Pew Research says indifferent citizens, or as it fittingly typographically classify them, the bystanders, are “missing in action politically.” Now, there are many reasons people aren’t politically engaged. Some don’t have the capacity due to socioeconomic status or disability, and others may be rightfully disoriented by the entire process. Then there’s those that are engaged but are disenfranchised by voter fraud biased against minority groups. These reasons almost never apply to my demographic, yet statistically fewer 18- to 24-year-old white males are registered to vote than our black and female counterparts. The logic seems to be, “If it’s not affecting me, why should I care? There are 30-racks to finish and NFL games three days a week, after all, and that’s not even factoring in the strenuous work of setting multiple fantasy lineups.”

I understand lecturing a nonpolitical white people on their privilege won’t inspire them to pick up a sign and start protesting in Washington overnight. But I ask a simple favor: Please vote.

In my experience asking those my age why they choose not to exercise their right, most avoid straight-up claiming they couldn’t care less. They stick with oft-cited responses that politicians are corrupt, their state isn’t competitive, or neither party speaks to them. The problem with these claims is that they’re perpetuated when voters abstain. Voting has the power to change these qualms and form a more representative government. The key is, the government already serves and has served white people. So people must come to the realization that representation may not directly serve themselves, but through the simple political action they can benefit the marginalized.

Again, this is a request that lacks real effort, and no meaningful, drastic change comes with ease. Some of you reading may be reminded of Martin Luther King Jr.’s “Letter from Birmingham Jail” that he wrote over 55 years ago. No, not because my writing resembles that of the most famous activist from the Civil Rights movement, but because MLK discussed the “white moderate.” Those who’ve read it might say my argument is diametrically opposed to his, particularly when he claimed the white moderate “is more devoted to order than to justice; who prefers a negative peace which is the absence of tension to a positive peace which is the presence of justice.” I would agree with you. But I also believe MLK is correct. The first steps toward this type of tension must avoid the “social stagnation” MLK attributes to order that lacks properly aligned justice, but I believe it must come from somewhere within established order.

So please, dear white male of similar age, get off those stale sheets and close the laptop on your Twitch stream. I’m not claiming it’s a necessity to check the “select all Democrats” box when you step through the curtain in November, I just hope you go in educated with concern for those other than yourself. There is a trend of regression in today’s political climate, and I really think it can be reverted if this “preoccupied minority” has a wave of efficacy wash over them.