Spartan, the world’s largest obstacle race and endurance brand, will be at Fenway Park on Nov. 10 and 11 as part of its effort to get 100 million people up and active. The stadium race is a part of the company’s newly launched #EFFthis (Excuse Free Fitness) campaign, which aims to alleviate the financial burden that often accompanies effective health and fitness programs.

The campaign is dedicated to “providing free and low-cost options for people of all ages to get in shape on and off the Spartan race course,” according to a press release. Recognizing the financial restraints experienced by many college students, Spartan has committed to offer up to 50,000 free race entries for all college students in the United States. Students can also race for free every Sunday.

“We understand that when you’re in school you might not have the funds to race all the time,” said Jonathan Fine, head of global brand communications at Spartan. “We still want to give everyone that can the opportunity to race.”

The #EFFthis campaign specifically targets students and young adults because of the positive correlation Spartan notes between physical activity and academic performance. A study conducted by North Carolina State University found that students who increased their weekly exercise by one hour were nearly 50 percent more likely to graduate or return to school the following year, according to the press release. Each additional hour of physical activity correlated to an increase of 0.06 GPA points.

For these reasons, Spartan hopes the campaign will eliminate one barrier that prevents many students from pursuing their fitness goals: cost.

“Fitness is for everyone, not just those who can afford it,” Spartan founder and CEO Joe de Sena said in the release. “We will do everything in our power to provide people with this fundamental right.”

Spartan offers three distinct types of races: sprint, super, and beast. The race at Fenway will be a stadium sprint. At three to five miles long, Fine described the sprint as the entry-level competition.

The Fenway stadium sprint will feature all of the signature obstacles Spartan races have come to be known for, including box jumps and biking. With 20 to 23 obstacles, the fastest time is set at 40 minutes.

Far from being any typical race, however, the competition at Fenway will offer access into one of the oldest stadiums in sports. There will be obstacles on the warning track and in the concourses, as well as push-ups in the visiting team’s locker room. Following the push-ups, racers will exit through the visiting team’s dugout.

Fenway Park was the site of Spartan’s first-ever stadium sprint, and the November race will mark the seventh time it has hosted the obstacle course.

Spartan holds 10 stadium sprints throughout the year, with locations spanning the country. Other noteworthy locations include Dodger Stadium, Lambeau Field, and AT&T Stadium.

“The stadium races are really cool because they’re inside some of the most coveted either NFL or MLB stadiums across the country,” said Fine.

De Sena advocated for competitions like the stadium sprint because they force participants to meet a fitness goal by a specific deadline, according to Fine.

“He found that putting a date on the calendar is really what helps, so that you have something to train for,” he said. 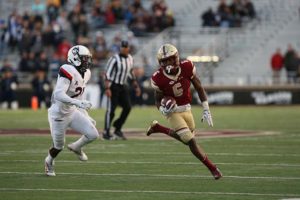 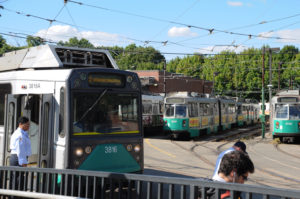