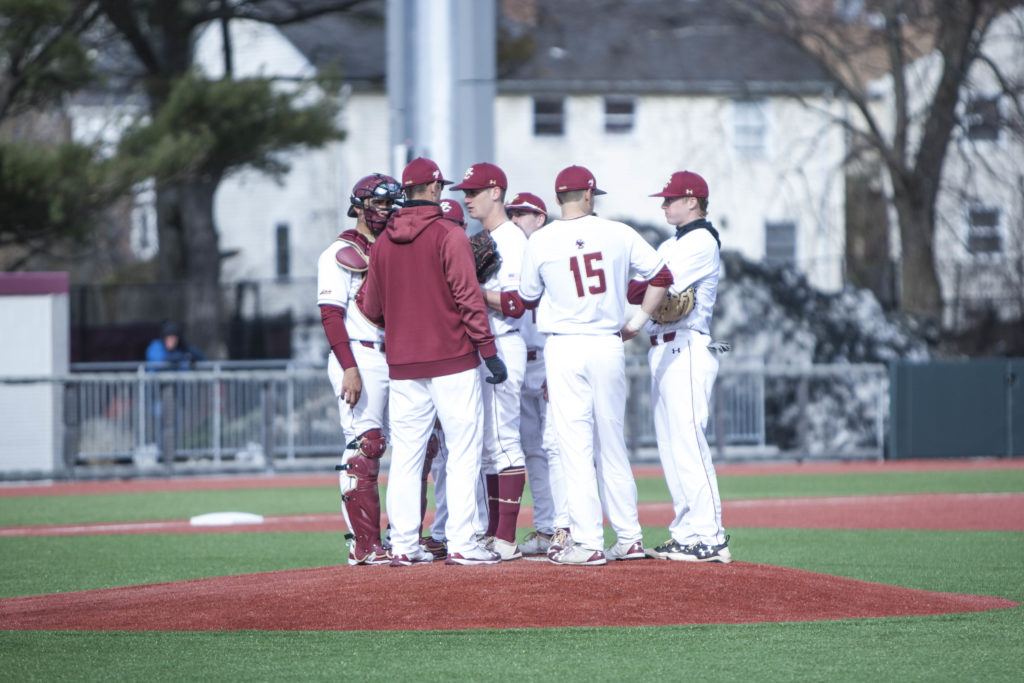 Since Boston College baseball head coach Mike Gambino took the job in July 2010, he and his staff have wrestled with the difficulties of holding fall practices. So-called “fall ball” practices for the Eagles have been countered with typical rainy Northeast weather and the outfield of Shea Field being used on the weekends for tailgating. And last year, the Eagles were relegated to practicing at Babson College, as Shea—the baseball field they’d called home since 1961—was being torn down.

The new field on Brighton Campus at the Harrington Athletics Village, though, has pretty much solved all of those consistent headaches, leaving Gambino more than pleased with his team’s 2018 fall practices—which wrapped up in the final week of October and featured exhibitions against Southern New Hampshire and Quinnipiac.

“It’s silly and simple, but to have a fall with a baseball field,” Gambino said when asked about what was good about the annual preseason practices. After a down year in 2017, where the Eagles went just 17-32 and managed seven conference wins, Gambino said he noticed a big correction this fall and spoke optimistically of his team’s chances.

BC enters 2019 without two of its three members from last season’s weekend rotation—Jacob Stevens and Brian Rapp went in the 21st and 26th round of the MLB draft, respectively—as well as one of the cornerstones of the program in four-year starter Jake Palomaki. To counter this, Gambino brought in a large class, bringing in 11 freshmen, a large group that should make things interesting for the plethora of players returning.

The Eagles will look to bring those 11, five of which play in the field, into the fold, alongside players poised for big seasons—Dante Baldelli, Jack Cunningham, Joe Suozzi, Gian Martellini, and Brian Dempsey are all familiar faces expected to likely take big steps. That’s without mentioning returning freshman All-American Chris Galland, who is aiming to follow up a tremendous season, as his speed proved to be the Eagles’ biggest weapon in 2017.

He’ll be one part of a lineup that should be fun to watch, one that will rely on speed rather than power to score runs. Galland swiped 28 bases last season while hitting to the tune of .316, and if he sees a jump in average, a corresponding bump in stolen base totals could be seen—Gambino placed the number as high as 40 to 50. The rest of the outfield could make a run for that 25-plus stolen base plateau, as Baldelli stole 19 bases, despite hitting just .235, so a leap in batting average would likely see a comparable total to Galland.

Of the newcomers, many are fighting for spots in what is a competitive lineup. Gambino cited lots of good combinations he can work with, and it’s clear why. Not only does a bulk of last year’s starting nine return, but the freshmen are poised to make contributions as well. Catcher Peter Burns will likely put pressure on Martellini, while the likes of Ramon Jimenez, Sal Frelick, and Cody Morissette will all vie for consistent playing time.

As for the pitching, BC finished near the bottom of the ACC with a 5.19 earned run average as a staff last year, and that was with Stevens and Rapp pitching pretty well throughout the course of the season. Outside of Dan Metzdorf, the lone returning consistent starter, the Eagles will have plenty of chances for pitchers to seize innings. It could be a more committee approach than your typical 1-2-3 weekend rotation, but that’s still up in the air. Regardless, Gambino sees a pitching staff with many guys that could appear in less traditional, smaller doses.

Among those newcomers are southpaw Emmett Sheehan and righthanders Mason Pelio, Joe Mancini, and Travis Lane—the younger brother of current BC reliever Thomas Lane. The group was dubbed “electric” by the eighth-year head coach, and they’ll pitch alongside players who took big steps this fall in Matt Gill, Joey Walsh, and Will Heslink. Gill, a junior, has made 10 starts over the course of his Eagles career and will likely make more this season—the hard-throwing right-hander enjoyed a strong fall and could step into an important rotation role.

For now, though, it’s a waiting game for the program. Currently engaged in lifting and offseason workouts in small groups, the team will go home and reset over Thanksgiving break before ramping up again in the middle of December. Upon their return to campus, the 30-plus players on the 2019 roster will get ready to launch into the actual preseason. College baseball’s spring training equivalent begins on Jan. 15, and Gambino and his staff will have just 17 practices with the team before they open the season on Feb. 15—a quick turnaround likely made easier with a deep roster.