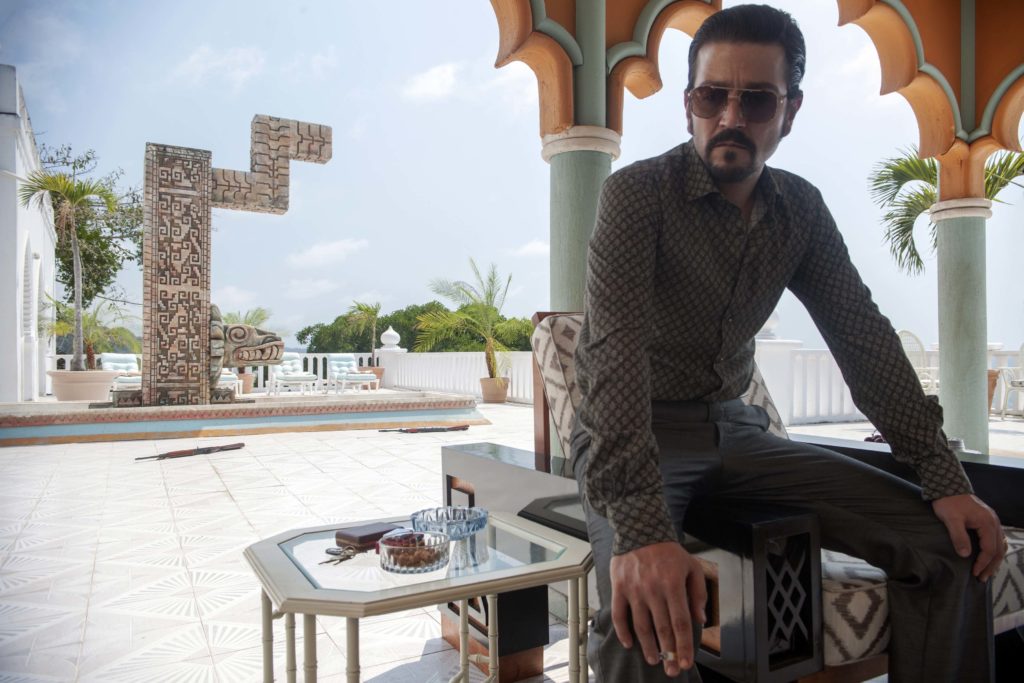 Deception, betrayal, and drugs—the new Netflix series Narcos: Mexico delivers a docudrama filled with tension and suspense, taking a look into the origins of the modern drug war and Mexican drug cartels.

Narcos: Mexico is a companion series to Netflix’s hit crime drama Narcos, and shifts the focus and location from the Colombian cocaine trade to the beginning of the modern Mexican drug trade and the Guadalajara Cartel, which consolidated what was a loose and disorganized group of independent traffickers into a criminal empire.

The show centers on Miguel Ángel Félix Gallardo (Diego Luna), the founder and leader of the Guadalajara Cartel, and Kiki Camarena (Michael Peña), an undercover DEA agent hoping to bring the entire cartel down.

Narcos: Mexico starts with an American narrator warning that the story does not have a happy ending, as the viewer watches a man who is soon revealed to be the protagonist, Camarena, get kidnapped in broad daylight with the police’s full acknowledgement. The narrator then brings the story back to the beginning, to Sinaloa and Gallardo, a former police officer who has big dreams of forming a large drug trafficking empire. The story begins with the Mexican government sending in the army to burn Sinaloan marijuana fields, which chases a man named Rafa into a church, only to be rescued by Gallardo, who is also part of the weed business.

Attention then turns to the American side, where Camarena works an undercover operation for the DEA, relatively small and unknown at the time, and shows his remarkable courage by making a dealer point a loaded gun at his head to prove he is not law enforcement, but is unfortunately interrupted by local authorities who try to arrest him and blow up the entire operation. Camarena decides to take the transfer to Guadalajara after he fails to receive the transfer to Miami that he wants.

After the field burnings, Gallardo and his local crew need to find a new place to restart their operations, and Gallardo sets his sights on Guadalajara. Convincing his local boss to let him go negotiate, Gallardo goes to Guadalajara and kills the Guadalajaran kingpin on the negotiation table, prompting an arrest by the Dirección Federal de Seguridad (DFS), a Mexican intelligence agency described as the KGB and the Gestapo mixed into one. Lying his way into a meeting with the head of the DFS rather than getting directly killed, Gallardo manages to impress with Rafa’s new weed, which packs more of a punch with less bulk than the existing strands, and lands a deal to begin growing in Guadalajara.

Eventually, Gallardo manages to convince many different small cartels to join together to create one unified operation—through guile and treachery, no less—and becomes the godfather of the Guadalajara Cartel. Camarena, meanwhile, keeps a sharp eye on the DFS officers and begins to pursue Gallardo, as he tries to gather enough evidence on him to nail him. The game of cat and mouse is not the only storyline, however, and many different characters and side plots in both main characters’ own lives add dimension and depth to the show.

The two main lead actors, Luna and Peña, do fantastic jobs in their portrayals of the characters. Distinct personality traits are clear from the beginning, as Camarena’s hot temper and Gallardo’s ruthless guile are made evident very quickly. Luna especially excels in his portrayal of the drug lord, as his quiet and brooding look often conceals the tremendous amount of ambition lying underneath the surface, and his ability to lie with a completely straight face just further highlights the chilling sociopathic nature of the character.

The show leans more favorably toward the American law enforcement officers, but no characters are perfect. Camarena struggles with his temper, and his hotheaded tendencies give him an unusual courage, which can both be an asset and a flaw. Gallardo, on the other hand, can bend to whatever situation meets him, but his willingness to bend the truth to fit his own narrative also land him in dangerous situations. Both men—although enemies—are similar in the way that they are extraordinary figures trying to break out of an established mold of doing things—Camarena trying to force the law enforcement out of its complacency, and Gallardo dreaming of a greater empire.

The show’s grittiness delivers a right amount of punch, and portrays a real story with the intensity and clarity it deserves. Fans of the original Narcos would enjoy this series, especially as characters from the original show eventually crossover when the Guadalajara cartel gets involved in Colombian cocaine.