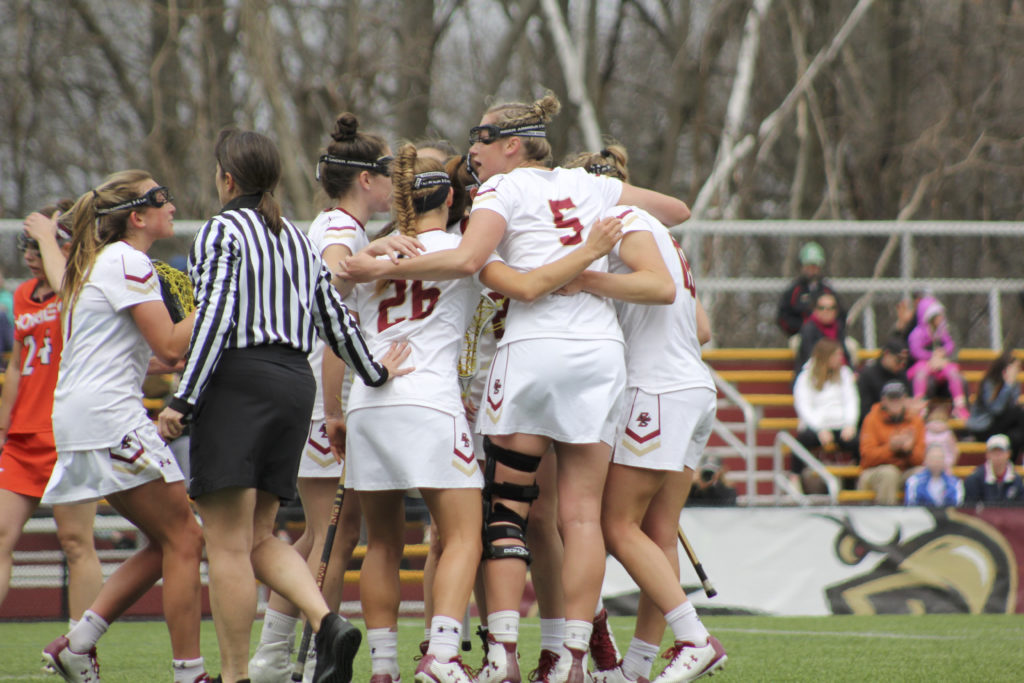 All Boston College lacrosse did last season was set a program record for wins, go undefeated in the regular season, come within three goals of the ACC Championship, and within one goal of a National Championship. The Eagles, under head coach Acacia Walker-Weinstein, had a program-record six All-ACC selections and saw junior Sam Apuzzo win the Tewaaraton Award.

Apuzzo and Dempsey Arsenault both earned call-ups to the United States National Team in the offseason, while four of Walker-Weinstein’s incoming freshman class played in in the High School All-America game. The roster is taking a hit in 2019—Emma and Tara Schurr, a resilient Tess Chandler, and Kaileen Hart are all departing—but it also gets a massive boost after Kenzie Kent redshirted last year to get her first full spring with the team. All in all, the excitement around this program isn’t going away anytime soon, and the schedule BC announced on Tuesday afternoon speaks to the high level of play expected.

→ The Eagles open the season against their rivals, but things have been anything but close between the two teams in years past. Last season, BC rolled to a dominant 18-6 win on BU’s home field as Arsenault went off for five goals. The last time the Terriers beat the Eagles was back in 2009, so one can likely expect a strong start to the 2019 campaign for Walker-Weinstein’s bunch.

→ Historically, the Orange have had the Eagles’ number, having taken 15 of 19 matchups. Two of BC’s four wins in the all-time series have come in the past two years, though, including a narrow 13-12 thriller last year that polished off a perfect regular season campaign. Apuzzo scored an incredible goal as time expired to knock off the then-No. 16 Syracuse, one of five in the game for the junior.

→ After a stretch of three opponents that the Eagles have a combined 23-31 all-time record against, things don’t get any easier. They host the Trojans, a team they needed overtime to beat in the regular season last year in Los Angeles. There’s a lot riding on this game for USC, as BC also knocked them out in the quarterfinals of the 2017 NCAA Tournament.

→ When you ask about a game that defined Apuzzo’s Tewaaraton Award-winning season, many will point to when the Midshipmen arrived in Newton at the end of February. Apuzzo set a BC single-game goals record with nine, scoring at will against then-No. 11 Navy. It was a remarkable individual performance that preserved the Eagles perfect record in four games against the Midshipmen, which includes a win in the NCAA Tournament in 2016.

→ For the first time in 13 years, BC will play the Hoyas—a member alongside it in the original Big East conference in other sports. Georgetown enjoyed an impressive run of success in the early 2000s, right around the time it dealt the Eagles five losses in five years.

→ BC only lost twice last season, and one of those was at the hands of the Tar Heels. Despite beating UNC soundly, 17-11, earlier in the year, the Eagles were dealt a neutral site loss in the ACC title game. It was a tough 13-11 defeat for BC, which had never previously made it that far. A herculean performance from tournament MVP Taylor Moreno, the Tar Heels’ goaltender, held the potent Eagles attack largely in check.

→ The first conference home game comes against the Cavaliers, a team that—like many in the conference—has enjoyed plenty of historical success against the Eagles until recently. Last year, UVA played BC to a deadlock at halftime, but the Eagles pulled away for a 15-12 victory.

→ This rivalry matchup was last year’s season opener, a game where BC arrived in South Bend and slipped away with a two-goal victory. This year’s matchup will be for bragging rights, as the two teams each have seven wins in the 14-game all-time series. Still, that statistic is slightly misleading—the Eagles have won a remarkable seven of the last eight between the two schools.

→ The last regular season game for the likes of Apuzzo, Arsenault, and Kent comes against the Cardinals, who BC pummeled in the first round of the ACC Tournament last year. In two games against Louisville in 2018, the Eagles piled up 38 goals—which included halves that featured 14 and 16 goals, respectively.