Midway through the first quarter of Sunday afternoon’s road game against No. 1 Notre Dame, Boston College women’s basketball point guard Makayla Dickens sunk her third 3-pointer of the day to give her team a 14-13 edge. Five minutes later, the Eagles were heading into the second quarter down by 13 points, and it only got worse from there. The Irish—winners of 11 straight—went on four different eight-point runs en route to a 92-63 win.

The Eagles (13-6, 2-4 Atlantic Coast) have already more than doubled their win total from last year, but the steps they’ve taken didn’t translate against a overpowering Irish opponent. Still, Notre Dame’s (18-1, 6-0) dominance was expected. It entered having won all six of its conference games by an average of 29 points, and its impressive depth was on display with all five starters reaching double-digits.

All five of Notre Dame’s starters reached double figures and two recorded double-doubles. Jackie Young ended the game with 18 points and 13 rebounds while Jessica Shepard filled up the stat sheet 11 points, 10 rebounds, six assists and two blocks. Arike Ogunbowale led all scorers with 24 points on 50 percent shooting, including 3-of-7 from distance. Defensively, Ogunbowale recorded five steals, showing on both sides of the ball why she is among the top women’s basketball players in the nation.

Taylor Soule led the Eagles in scoring, putting up a career-high 18 points on 5-of-6 shooting off the bench. Soule added five rebounds and three assists to her efforts. Dickens finished with 12 points, five rebounds, and five assists but was a non-factor after the first quarter.

The Eagles kept things close in the beginning of the game, when they were tied 11-11. Dickens started out hot, hitting her first three 3-point shots of the game. However, coming out of the first media timeout, the Fighting Irish turned up the intensity, switching from a zone defense to man-to-man defense. Notre Dame ended the quarter on a 21-8 run and it was only a sign of things to come.

Soule scored BC’s first six points of the second quarter, connecting on a jumper and a pair of fast break layups, but Irish guard Marina Mabrey answered by nearly doubling her team’s lead single-handedly. Mabrey sunk a free throw, consecutive 3-pointers, and a layup in a span of four minutes, pushing Notre Dame’s advantage to 20. BC had a mini 5-0 spurt left in its tank at the end of the half, Dickens converted an old-fashioned three-point play, and Georgia Pineau added a layup, but the Eagles still went into the break trailing by 15.

That gap closed to 11 at the outset of the second half, with Emma Guy sinking a layup and Soule hitting two free throws—she finished 8-of-10 from the line in an impressive performance—but BC was never able to close it to single digits. Ogunbowale had six points in the quarter, as the Irish had an answer for each Eagles bucket.

Notre Dame really upped the ante at the start of the fourth quarter, displaying its full offensive capabilities. Four different players scored as part of an 8-0 run, punctuated by a Mabrey jumper and a Young and-one. BC’s Sydney Lowery stopped the bleeding with a jumper off the bench, but the Irish strung together a collective 14-2 run to push the lead to just shy of 30. Seven minutes later, the Eagles were walking off the court, replicating last year’s 29-point road loss to the Irish.

Notre Dame was able to dominate offensively, scoring from all over the court. Inside, the Irish outscored the Eagles in the paint by a convincing 42-28 margin. Notre Dame also shot an impressive 46 percent from 3-point range and snagged an additional 15 offensive rebounds. This decisive edge inside led to 25 second-chance points, an unrelenting style of play.

Offensively, BC was stifled by the Irish defense, which registered 14 steals and six blocks. The Eagles shot just 40 percent from the field and 25 percent from 3-point land and were hurt by turnovers, coughing up the ball 24 times. Foul trouble was another problem for the Eagles, with four players having three or more fouls. Emma Guy fouled out in just the third quarter, badly hurting BC’s depth.

The Eagles have a tough stretch of ACC games coming up soon, including a rematch against Notre Dame, this time at home. Last year’s loss to the Irish was followed by seven consecutive conference defeats in a row, something that head coach Joanna Bernabei-McNamee will seek to avoid in her first year at the helm. While Miami—BC’s next opponent—is no slouch with four wins in five ACC games, the Eagles will look to shake off their offensive woes and steal a win in Coral Gables. 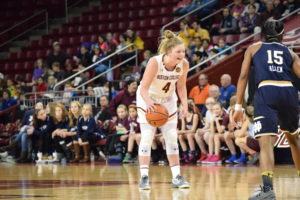