Home » Himes: State of the Art 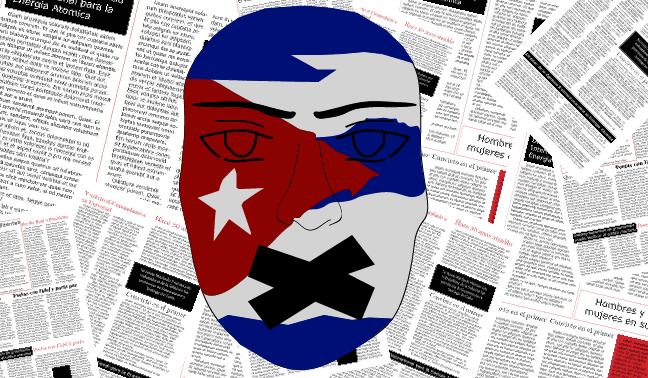 Himes: State of the Art

Cuba essentially fell off the map after Fidel Castro died in 2016. Talk of opening the country, then closing it, prevailed in the United States, but was muffled by the never-ending turmoil resulting from our own problematic government. Most thought Castro’s death would bring about positive change in the country, but those of us closer to the matter knew little would change.

Miguel Díaz-Canel is currently serving as the president (don’t be fooled—he’s part of the communist party) of Cuba. While the island has been relatively quiet since he took power, he recently introduced legislation that is enraging people near and far: Decree 349. The decree contains intentionally vague language that allows for unfair punishment and imbecilic censorship of artists on the island, and while harassment of artists is nothing new among Cuban officials, it will now be totally legitimized and sanctioned.

According to The Wall Street Journal, Decree 349 “bans the exhibition and sale of artworks and music shows not authorized by the state,” and therefore empowers the government to further censor anything not conducive to the communist regime. It also targets song lyrics that are sexually explicit or vulgar.

Art is not always political, but often it is—and it should be as political as the creator wants it to be. Art has historically acted as a force for social and political change and gives a voice to the people. Countless pieces of famous artwork have political messages behind them, from Picasso’s Guernica to “Highway 61 Revisited.”

Music with political messages is especially prevalent, and the freedom to create it is often taken for granted. From Beyonce’s “Formation” to Childish Gambino’s “This is America,” artists use powerful lyrics to address the injustices America faces today. This isn’t a new practice, though—opposition to the Vietnam War created some revolutionary music that’s still listened to today, including Creedence Clearwater Revival’s “Fortunate Son,” The Animals’ “House of the Rising Sun,” and Jimi Hendrix’s “All Along the Watchtower.” Bob Marley’s “I Shot the Sheriff,” John Lennon’s “Imagine,” and The Beatles’ “Revolution” are all famously deeply political, not to mention how much money Americans—and ironically, Londoners—are spending to get tickets to see Hamilton, an intrinsically political production that doesn’t necessarily portray our founding fathers in the most positive light, instead highlighting their faults alongside their many strengths.

Imagine if President Trump could censor artists and musicians based on the content of their work. Further, what if comedians were censored? Saturday Night Live hardly ever airs an episode without making jokes about Trump. Neither do The Tonight Show, The Late Show, or The Daily Show. America would be in an uproar if Pink’s “What About Us” was pulled from the radio because of its potentially political undertones, just like we’d be outraged if classic Hamilton catchphrases like “Immigrants: We get the job done” were retracted from the set. I can’t even imagine what would happen if they tried to take away, well, just about anything Dylan has ever written.

Cesar A. Cruz once said that “Art should comfort the disturbed and disturb the comfortable,” and Decree 349 completely disavows that quote’s entire second clause. By a single sweep of legislation, the Díaz-Canel regime is removing art that will “disturb the comfortable” (e.g., the government officials themselves) simply to make themselves appear more legitimate. Out of sight, out of mind, right?

In recent years, a younger generation of Cubans has gained relative financial independence, and they’re starting to sell their art in private galleries that appeal to foreign collectors, according to The Wall Street Journal. Artists of all sorts have recently been detained by the Cuban government, among them visual artists and musicians.

The decree holds that artists must get their work (including lyrics for musicians) approved by the government. Further, “supervising inspectors” may be present at cultural events to ensure they do not dissent from the regulations.

Decree 349 probably won’t change much, but it will institutionalize harassment and censorship of artists that was already happening in the first place. No matter how far Cuba has come as a country, it will never get to where it needs to be without freedom of speech and expression. Censorship is a clear sign of weakness, but as long as censorship is in practice, the current regime will be too.

After watching The Marvelous Mrs. Maisel over Christmas break, I was inspired to look up old bits performed by Lenny Bruce, who is portrayed by Luke Kirby on the show. Listening to him in 2019 is a weird experience because I think he was considered obscene even by 1950s standards, when making racist jokes didn’t raise any eyebrows whatsoever. But I did come across a quote of his that fits so perfectly to Cuba’s eerie situation: “Take away the right to say ‘f—k,’ and you take away the right to say ‘f—k the government.’” Ironically, he was arrested three times because of obscenity.

Censorship is a grave danger that is often overlooked among democratic countries. The more we fail to stand up to governments that prioritize censorship, the more they will continue to capitalize on it.